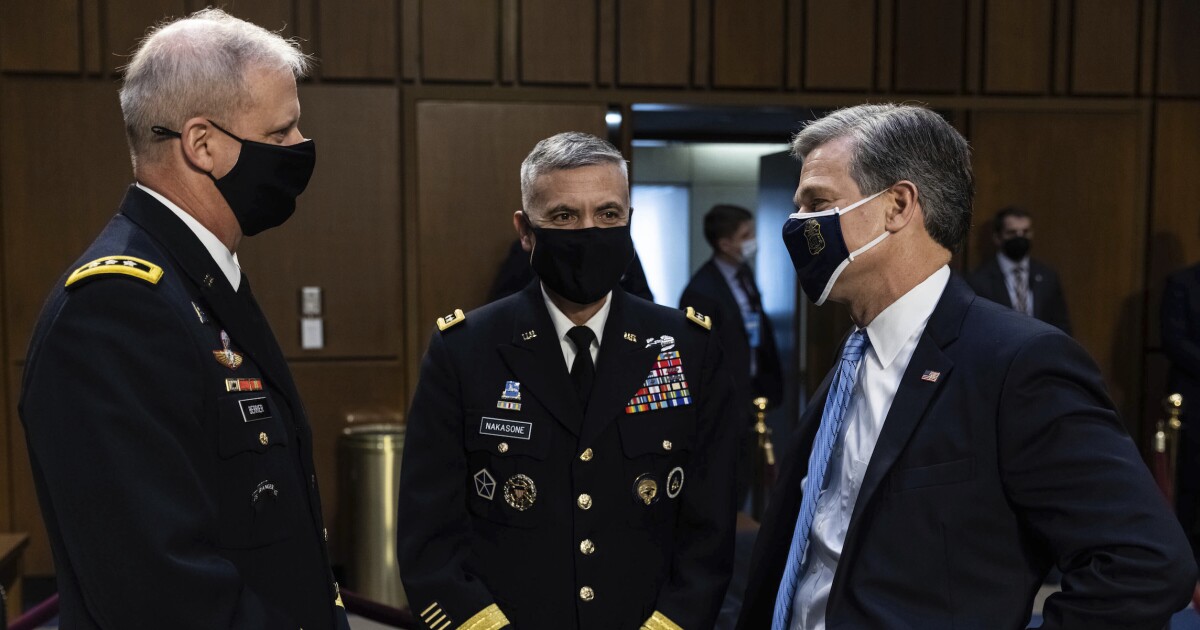 FBI Director Christopher Wray contradicted Joe Biden’s previous comments about antifa, with the bureau chief arguing the radical leftist group is not just an “idea” but rather a real threat the FBI is investigating.

Last summer, during congressional testimony on antifa, Wray said the FBI viewed the group as an “ideology” or “movement” but declined to call it an organization. That brought a swift rebuke from then-President Donald Trump and was exploited by candidate Biden, who subtly twisted Wray’s quote, calling antifa an “idea” instead and implying the bureau chief said only white supremacists were a true threat.

Last week, however, Wray was repeatedly grilled by Republicans during a House Intelligence Committee hearing, and while he ditched the “ideology” language in favor of just calling it a “movement,” he would not call antifa an organization, though he insisted he did not mean it wasn’t dangerous and repeatedly said the FBI was investigating and taking it seriously.

Rep. Michael Turner, an Ohio Republican, asked if it was his testimony that antifa was not an organization that was conducting violence in cities and against the U.S. government.

Wray replied: “We consider antifa to be more of a movement. … There are certainly local and regional nodes, individuals who self-identify with antifa, who commit violent attacks citing that as their motivation, and we have a number of predicated investigations into such individuals. Antifa is a real thing; it’s not a fiction, and it’s a concern.”

Turner asked if antifa had organized training for members, and Wray said: “We have seen individual instances in small regional nodes of people coming together to train,” but “there’s not some big, national structure that is responsible for the violence — what we have seen is locally organized nodes.” When pressed on the organizing, the FBI chief said “at the local level, in some cases the regional level, we have seen organized activity — people working together.”

Turner also repeatedly grilled him on antifa’s funding, with Wray replying, “I think the financing issue is something we continue to investigate, but there’s nothing that I can share at this time.”

Biden used Wray’s comments to downplay the threat posed by antifa during the first presidential debate. The moderator, Fox News host Chris Wallace, noted Trump had criticized Biden’s stance toward antifa but asked if Trump would be “willing tonight to condemn white supremacists and militia groups and to say that they need to stand down.” The exchange subsequently led to Trump's “stand back and stand by” remark about the Proud Boys, but not before he charged that “somebody has got to do something about antifa and the Left.”

Biden then falsely implied Wray had said antifa was not a threat and misquoted him, with Biden saying he called antifa an “idea” — not an “ideology” or a “movement.”

“His own FBI director said the threat comes from white supremacists — antifa is an idea, not an organization,” Biden said, with Trump retorting, “Oh, you’ve gotta be kidding me.” Biden then repeated that “that’s what his FBI director said.”

“Well, then you know what? He’s wrong,” Trump said. “When a bat hits you over the head, that’s not an idea. Antifa is bad.”

Biden replied, “Everybody who gives you advice in your administration that tells you the truth has a bad idea.” Trump quipped, “Antifa is a dangerous, radical group. And you ought to be careful with them — they’ll overthrow you in a few seconds.”

Last week, Rep. Mike Quigley, an Illinois Democrat, followed up after Turner’s back-and-forth with Wray to see if the FBI director had more to add.

“So, we take anarchist violent extremism, much of which associates with the antifa movement, very seriously. … It is something that we investigate very aggressively, and in fact, the number of investigations in that space is something that’s dramatically increased on my watch over the last few years. And I think last year, we had more arrests in the anarchic violent extremism space than in the prior three years combined,” Wray said, adding, “There’s a tendency on the part of people to want to view how structured and organized something is as a proxy for how seriously threatening it is or isn’t, and those two things don’t necessarily conflate. There is a lot of very dangerous, serious activity out there that’s not organized.”

Wray added that he wasn't trying to minimize the threat, saying his assessment of antifa as a “movement” does not mean they are “any less dangerous or less threatening” and that “we have seen organized, tactical activity at the local and regional level; we’re investigating it very aggressively.”

Rep. Markwayne Mullin, an Oklahoma Republican, pressed Wray on why he would say that antifa is not a national organization.

“What I can tell you is that we have seen adherents to the antifa movement who organize at the tactical level, locally and regional, what I call small nodes,” Wray said, adding, “We are using our Joint Terrorism Task Forces to investigate things like tactics, funding, logistics, targeting, that sort of thing.”

Then-Attorney General William Barr declared in May that violence being “instigated and carried out” by “antifa and other similar groups” in connection to nationwide rioting is “domestic terrorism and will be treated accordingly.”

Last summer, self-described antifa member Michael Forest Reinoehl shot and killed right-wing Patriot Prayer supporter Aaron “Jay” Danielson on the streets of Portland, fleeing to Washington, where the U.S. Marshals found him; when he attempted to escape and produced a firearm, he was killed by law enforcement. Barr said then that “the tracking down of Reinoehl — a dangerous fugitive, admitted antifa member, and suspected murderer — is a significant accomplishment in the ongoing effort to restore law and order to Portland and other cities.”

The Justice Department indicated last year that over 300 people were charged with federal crimes during nationwide protests and rioting last year, with 80 charges related to arson and explosives, with others tied to assault on law enforcement and the destruction of government property. There were an estimated 14,000 or more total arrests during protests across the country, and over two dozen people died during the violence.