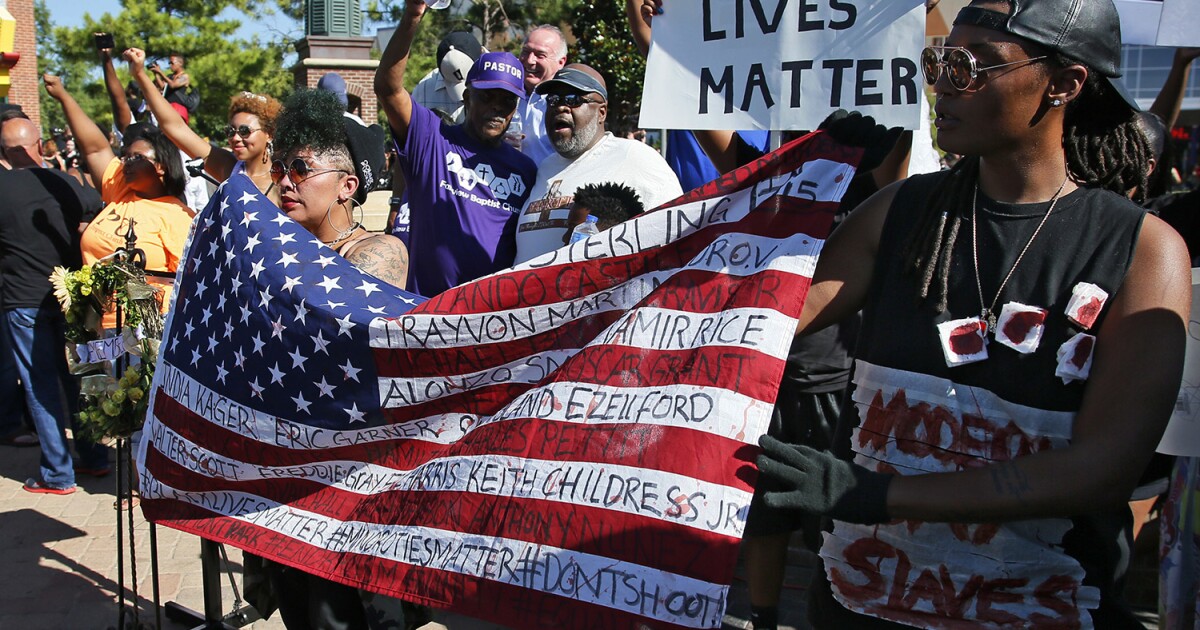 A viral video appears to show a Texas officer allowing a group of anti-police protesters to block a major roadway while they are confronted by a motorist.

“Get the [expletive] out of my way,” a tall man who exited his vehicle can be seen yelling at the large crowd blocking the road in a two-minute video that was uploaded Saturday and has nearly 3 million views.

He can be seen confronting several of the protesters by himself, while an officer standing nearby is also shown on the video.

The man repeatedly shouts at the protesters to get out of the way before confronting the officer, who is standing on the side of the road. The officer appears to dismiss the man, who again demands he get the protesters off the road.

The man then swats at an item in the hand of one of the people blocking traffic.

He again tells them to get out of his way.

The officer ultimately directs the man to return to his vehicle and to leave the protesters alone.

It is unclear from the video what the officer said, as his command was drowned out by the volume of the crowd.

“Thank you,” an individual can be heard saying off-camera.

“Black lives matter,” others can be heard shouting both on- and off-camera.

According to journalist Andy Ngo, the events of the video occurred last week in Plano, Texas, when protesters gathered to demand consequences for the officers involved in the death of Marvin Scott III. Scott, 26, died in March while in police custody at Collin County Jail.

Several protests have been held in Plano and nearby Frisco since Scott's death.

He died from a “fatal acute stress response in an individual with previously diagnosed schizophrenia during restraint struggle with law enforcement,” with the Collin County medical examiner’s office ruling the death a homicide.

One protester of Scott's death, identified as Quincy Okafor of DeSoto, recently told county commissioners that he understands the actions of the protesters are “risky.”

“I know what we’re doing is risky, but at the same time, I don’t appreciate Plano or Frisco sitting back and watching us have to block off traffic or not intervening until something escalates,” he said, according to the Dallas Morning News, urging officers to protect the protesters.

County Judge Chris Hill corrected him, saying the actions of the protesters were “illegal.”

The video sparked a major reaction online, as many vocalized their support for the man and wondered why the police allowed the road to be blocked.

If this can happen in Plano, it can happen anywhere. When will weak Republican leaders realize what time it is? This is not the time for coddling. It’s the time for shutting this lawless BS down using every tool you have. The mayor in Plano should be ashamed. Wake up and act! https://t.co/wRUP9qgol6

The Plano Police Department did not immediately respond to a request for comment from the Washington Examiner.