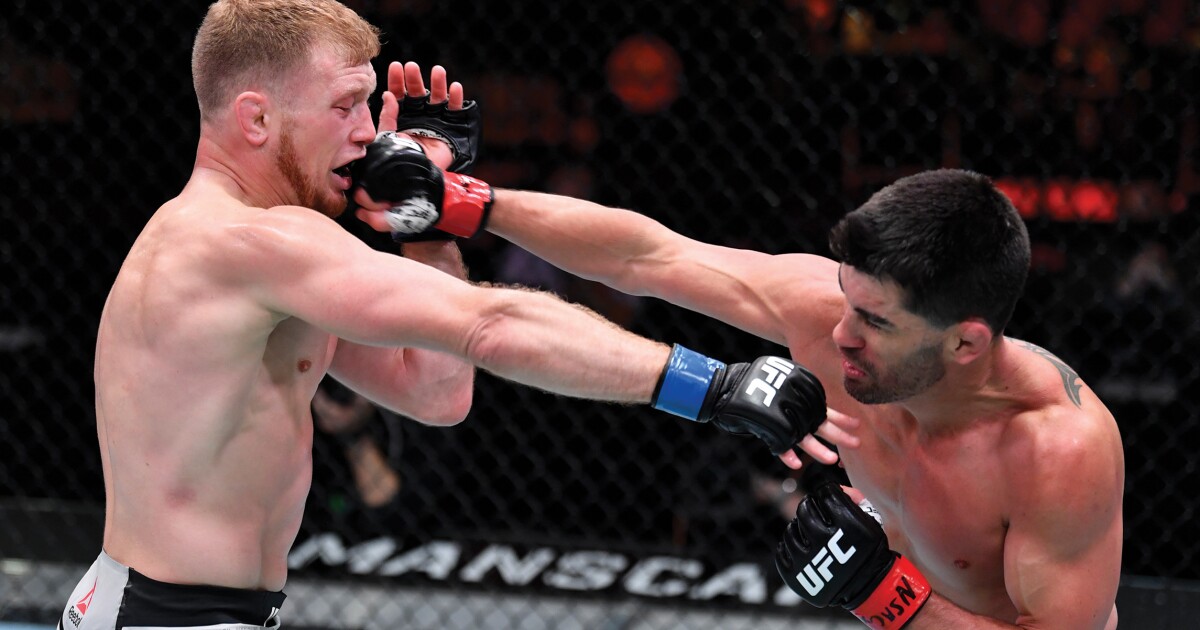 Dominick Cruz’s recent post-fight callout was an important moment in American sports. After a UFC fight, winners often challenge big-name fighters to create buzz for future bouts, but no one recognized the name Cruz yelled out: Hans Molenkamp. Cruz, a former bantamweight champion, accused Molenkamp, an employee at Monster Energy, the UFC’s corporate sponsor, of abusing his position in order to increase his social media “clout.” At a time when all other sports have become beholden to corporate interests, UFC fighters are trying to beat up their sponsors. This is why MMA is the best contender for our new national pastime.

The Cruz incident was emblematic. After the callout, others in the UFC revealed that they, too, were upset with Molenkamp but hadn’t wanted to risk their sponsorship money by speaking up. Baseball, basketball, and football are still more popular than MMA, but these sports now reflect society's worst tendencies. It’s hard to imagine major athletes from any of those sports publicly attacking their corporate masters.

The top three professional sports each embody different moments in history. Baseball was the pastime of the republic — a self-organized game that organically grew out of close-knit towns with open fields. Football was the sport of the midcentury managerial empire, a television spectacle in which players are cogs in a machine, executing complex plays designed by coaches. The NBA embodies the spirit of end-of-history globalism: Fans cheer for rootless mercenaries, and the whole thing is secretly bankrolled by China.

MMA is the sport of the present. We’re living through a permanent technologically driven revolution in which different ideologies and traditions are dissolved in the acid bath of the internet and transformed into something new. Likewise, MMA is a combination of multiple combat sports, including boxing, muay thai, judo, jiu-jitsu, and wrestling. Part of the appeal is watching how these different styles match up. A bout between a power puncher and a dominant wrestler is an intense cat-and-mouse game in which each fighter is trying to goad the other into his or her domain, and each is always one minor misstep away from defeat. It’s easy to appreciate the strategy involved because MMA hasn’t been infected with a bureaucratic ethos.

Other professional sports have a stultifying corporate culture that detracts from elite athleticism and elevates the manipulation of rules. In the NBA, players are frauds who flop at every chance. The NFL constantly tinkers with regulations, and now, nearly every play ends with players appealing to the referees. In baseball, in which arguing balls and strikes is a crucial element of the game, some people seriously want to replace human umpires with robots. The laws of the game are no longer thought of as what make the game possible but as another space to wage war, and this leads some to seek a post-human world in which law is handed down by purely rational machines.

The dehumanization of sports is hidden by constant propaganda that de-emphasizes athleticism and plays up mawkish “stories.” Monday Night Football is accompanied by promos that tell us the game is about so much more than sports because the cornerback’s grandmother’s neighbor’s cat has leukemia. MMA doesn’t need to manipulate you into a strong emotional response because it has a different relationship to rules.

Despite the lawless reputation it gained in its earliest days, MMA today is a well-regulated sport with clear rules designed to keep fighters safe. There is occasional gamesmanship, fighters sometimes appeal to the referees on illegal hits, and there are times when the judges don’t seem to score a fight the right way. But generally speaking, the rules are not the focus. Entire football games can turn on abstruse debates about whether a hand on a shoulder pad constitutes “interference.” No one needs a rule book to understand an uppercut to the chin.

Of course, we all love the big hits, but MMA is also a sport in which it’s easy to appreciate the little things. Jon Jones is one of the greatest fighters of all time, and it’s amazing just to watch the way he moves in the octagon. He’s a distance fighter who attacks with outrageous spinning elbows and flying knees. Both of Jones’s brothers have played in the NFL, but while their talent may get lost in the larger systems of football, Jones’s pure athleticism is impossible to miss. Conor McGregor rose to superstar status based on his trash talk and knockout power, but what one notices while watching him is how fluidly he maintains distance.

The UFC still promotes a “story” around fights, and fighters are always creating WWE-style personas that stretch the limits of reality. But the sport is immune to the worst types of fantasy because the story is built in. Victory and defeat are felt so acutely because the stakes are so high. The moment when a stunned fighter gets stalked down is among the most intense in all of sports. Fighters get clipped with a kick to the head, their knees buckle. Everyone senses the end is near. Sometimes, it happens quickly: The moment of weakness is immediately seized upon with a flying knee to the face. Sometimes, it happens slowly. But other times, the stunned fighter finds a way to survive. All sports feature great moments of triumph, but there is something unique about the grit involved in MMA comeback. It’s about people trying to survive and finding a way, any way, to win.

There is something disorienting about watching men covered in bizarre tattoos fight in a cage. It helps remind us that we are living through an age of profound global change. We would all love to indulge trite rhetoric about “who we are” and retreat into a Field of Dreams nostalgia. “Who we are” is a nation where law has become arbitrary. Some rioters are encouraged by our political establishment, while others get no-knock raided and beaten by prison guards. COVID-19 laws are used to fine small businesses out of existence, while giant corporations bully people for exercising their right to govern themselves. Our true pastimes are social media and prescription pills, and televised sports have become struggle sessions in which idiots hector people with the latest critical race conspiracy theory.

But resistance is in the air. People are sick of it all. Often, this resistance is left unspoken because everyone is afraid of the woke mobs and corporate commissars. Those, including Cruz, who shun the respectable world of corporate-mandated manners and creepy “oversight boards” will be cheered by all looking for a new national pastime.

James McElroy is a novelist and essayist based in New York.