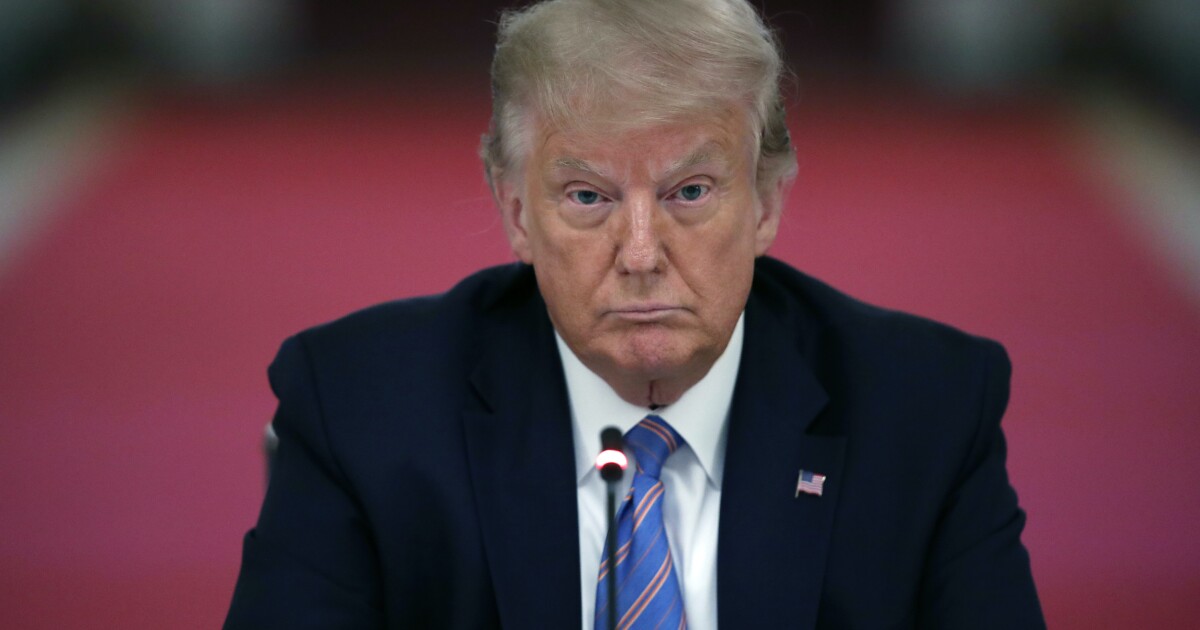 Former President Donald Trump blasted the announcement by New York Attorney General Letitia James that her investigation into the Trump Organization now has a “criminal capacity,” as he alleged her efforts were “an investigation that is in desperate search of a crime” and part of a “Witch Hunt.”

The New York Attorney General’s Office announced on Tuesday it had informed the Trump Organization that its investigation into the business “is no longer purely civil in nature” and that “we are now actively investigating the Trump Organization in a criminal capacity” along with Manhattan District Attorney Cyrus Vance Jr., marking an escalation in the New York-based inquiries that have been looking for possible bank, tax, or insurance fraud by Trump and his businesses.

“There is nothing more corrupt than an investigation that is in desperate search of a crime. But, make no mistake, that is exactly what is happening here,” Trump said in a lengthy statement posted on From the Desk of Donald Trump.

Trump contended that James was politically motivated and pointed to past statements from her, saying, “The Attorney General of New York literally campaigned on prosecuting Donald Trump even before she knew anything about me.”

Trump pointed to comments by James in 2018, in which she was asked what she would say to people who didn’t think it was worth voting, and replied, “I say one name: Donald Trump. That should motivate you. Get off your ass and vote. … Oh, we’re gonna definitely sue him. We’re gonna be a real pain in the ass. He’s gonna know my name personally.” In a 2018 interview, James had also said, “The president of the United States has to worry about three things; Mueller, Cohen, and Tish James. We’re all closing in on him.”

A court filing in 2019 by Trump lawyers laid out other comments by James, including her saying that she promised to “begin … an investigation into the Trump Administration with respect to his finances in the State of New York” and bring “the days of Donald Trump … to an end.” Trump’s lawyers also pointed to James saying that, if elected, “we will join with law enforcement and other attorneys general across this nation in removing this president from office” and that “I will be shining a bright light into every dark corner of his real estate dealings.”

“The Attorney General made each of these statements, not after having had an opportunity to actually look at the facts, but BEFORE she was even elected, BEFORE she had seen even a shred of evidence,” Trump lamented on Wednesday.

James’s investigation into the Trump Organization stretches back to at least August of 2020 when she announced that she was seeking a court order to require the Trump Organization and associated parties, including Trump's son Eric, to comply with subpoenas issued by the office of the attorney general. James, a Democrat, was looking into “whether the Trump Organization and Donald J. Trump (Mr. Trump) improperly inflated the value of Mr. Trump’s assets on annual financial statements in order to secure loans and obtain economic and tax benefits,” according to an Aug. 24 court filing.

Judge Arthur Engoron of the New York County Supreme Court ruled in December that the New York Attorney General’s Office should be given access to certain Trump Organization documents, and James celebrated then, saying, “Once again, justice and the rule of law prevailed.”

Vance, who announced in March that he will not seek reelection this year, has been engaged in his own legal battle with Trump in recent months.

The United States Supreme Court said in its July 9 ruling in Trump v. Vance that Trump must let New York look at his tax returns as part of Vance's own criminal investigation into the former president. In a 7-2 decision, the court ruled that “Article II and the Supremacy Clause do not categorically preclude, or require a heightened standard for, the issuance of a state criminal subpoena to a sitting President.”

Last week, the Wall Street Journal reported that New York prosecutors subpoenaed a Manhattan private school as Vance tries to secure the cooperation of Trump Organization Chief Financial Officer Allen Weisselberg in his inquiry into Trump and his company.

The Supreme Court shot down Trump’s legal block efforts again in February, and Vance obtained Trump’s records the same month. Filings obtained by the district attorney reportedly contain millions of pages of documents related to Trump's tax returns from January 2011 to August 2019. Vance's pursuit of Trump's records is part of an extensive inquiry into the former president's real estate properties.

Trump had sued the district attorney and Mazars USA, Trump's personal accounting firm, in federal court to block the enforcement of the subpoena, arguing that it violated the separation of powers in the Constitution and calling the inquiry a “continuation of the witch hunt.” Despite the district attorney now having access to Trump's records, public release is governed by grand jury secrecy rules.

“These investigations have also been going on for years with members and associates of the Trump Organization being viciously attacked, harassed, and threatened, in order to say anything bad about the 45th President of the United States. This would include having to make up false stories,” Trump said Wednesday. “Numerous documents, all prepared by large and prestigious law and accounting firms, have been examined, and many hours of testimony have been taken from many people, some of whom I have not seen in years.”

Special Counsel Robert Mueller’s investigation concluded in an April 2019 report that Russia interfered in a “sweeping and systematic fashion” but “did not establish that members of the Trump campaign conspired or coordinated with the Russian government in its election interference activities.”

Trump was first impeached in December 2019, with the articles of impeachment accusing him of abuse of power and obstruction of Congress related to his actions in Ukraine, but he was acquitted after a February 2020 Senate trial.

Trump supporters stormed the Capitol on Jan. 6, interrupting the congressional certification of Biden’s win over Trump, and the Democratic-led House voted to impeach Trump again, with the article of impeachment accusing him of inciting an insurrection, but he was acquitted after a Senate trial.

“After prosecutorial efforts the likes of which nobody has ever seen before, they failed to stop me in Washington, so they turned it over to New York to do their dirty work,” Trump said Wednesday.