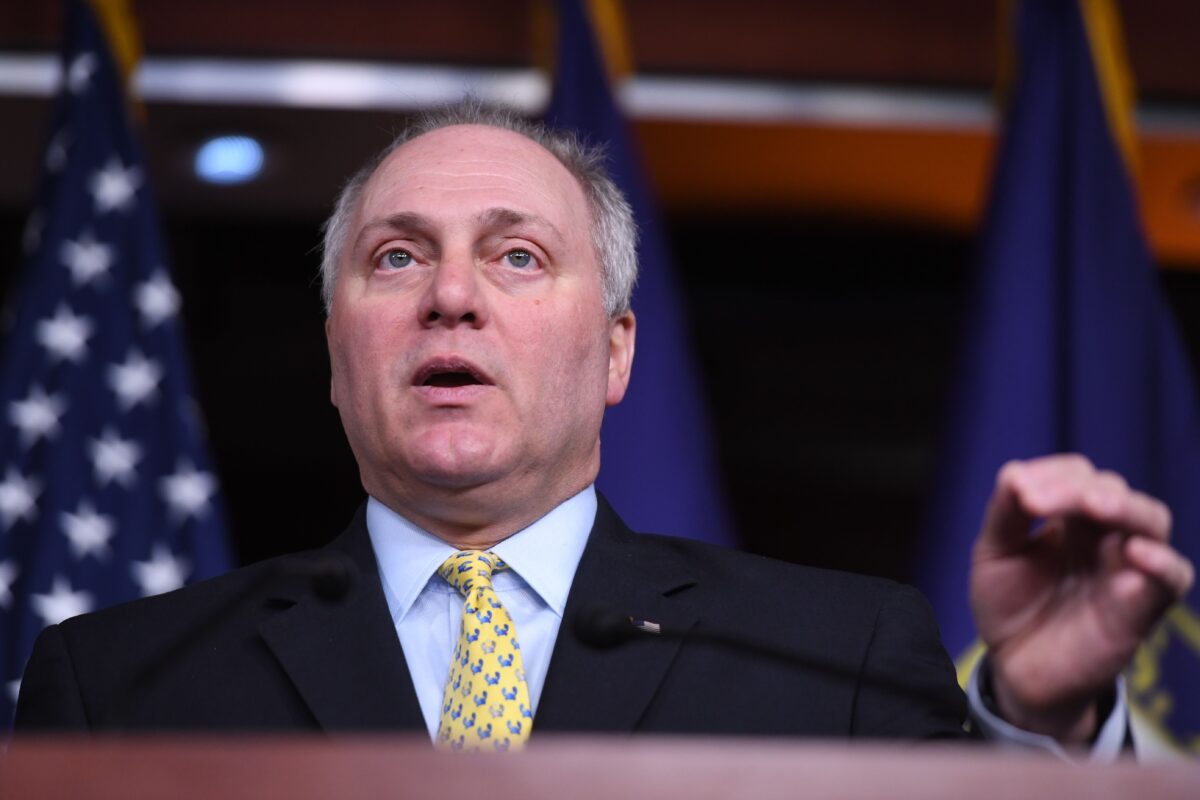 Rep. Steve Scalise (R-La.) said this week that he is open to working with Democrats to craft a package that would advance America’s infrastructure without raising taxes.

Scalise made the comments at a virtual Axios event on Friday where he urged President Joe Biden to fulfill his promise for unity and put the brakes on an advancing “far-left agenda.” His comments came after Biden delivered his 100-day speech to Congress earlier in the week.

“Look, if there’s any hope that we can work together it would be on infrastructure. What [Biden] laid out last night or the night before last was not really infrastructure,” Scalise said. “He’s talking about a lot of things that had very little to do with roads and bridges. And so I think there’s a chance for President Biden to fulfill his promise by working with Republicans, but he’s yet to do it so far.”

“He has been mostly spending trillions of dollars trying to advance the far-left agenda. And when you talk about raising taxes, killing American energy, running manufacturing out of this country, that might be a good agenda for China, [but] it’s not a good agenda for hardworking families here in America.”

Republicans are fighting to slim down the multi-trillion dollar package they say contains provisions that are extraneous and have little to do with infrastructure. They are also apprehensive about rolling back Trump-era tax cuts, a key feature of Biden’s plan. To pay for the infrastructure plan, the White House is proposing to raise the corporate tax rate to 28 percent from the current 21 percent.

“There are a few different ideas that are being worked on by Republicans and Democrats in the hundreds-of-billions-of-dollar range, not the trillions of dollars, but the most important part is the plans that I’ve seen that I like and would support would be plans that are fully paid for without new taxes,” Scalise said.

“And what I mean by that is reprioritizing existing federal dollars and there are some good plans that do that [but] once you start getting into deficit spending, and especially raising taxes on American jobs, making our country less competitive, and really hurting our middle class that was starting to come back, that’s not something that’s good for the country and it’s frankly it’s not what infrastructure is about.

“So, if there’s a plan where we can come together on things that actually make sense—to build more roads and bridges and broadband and help our infrastructure without raising taxes—that’s something I’m very open to,” he added.

Other Republicans, including Senate Majority Leader Mitch McConnell (R-Ky.), are also wary of Biden’s spending proposals, but have expressed an appetite for smaller bipartisan infrastructure solutions.

Last week, Sen. Shelley Moore Capito (R-W.Va.) and other Senate Republicans unveiled a $568 billion infrastructure counterproposal, which will focus on the traditional concept of infrastructure. The GOP plan includes $299 billion on roads and bridges, $61 billion on public transit systems, $20 billion on rail, $35 billion on drinking water and wastewater infrastructure, $13 billion on safety programs, $17 billion on ports and inland waterways, $44 billion on airports, $65 billion to expand broadband access, and $14 billion to address water shortages.

“Democrats don’t understand that logic, but when we cut taxes we brought millions of jobs back to America. You saw so many companies relocating companies that had left America to go to places like Ireland or Canada that moved their headquarters back, that moved jobs back by the millions,” he said.

“And because of that you had more people working, paying taxes. Hardly anybody was unemployed. If you wanted a job, every company was looking for workers, and they were paying higher wages. So it was great for American hardworking taxpayers, but it was also good for the Treasury because we took in more money by cutting taxes.”