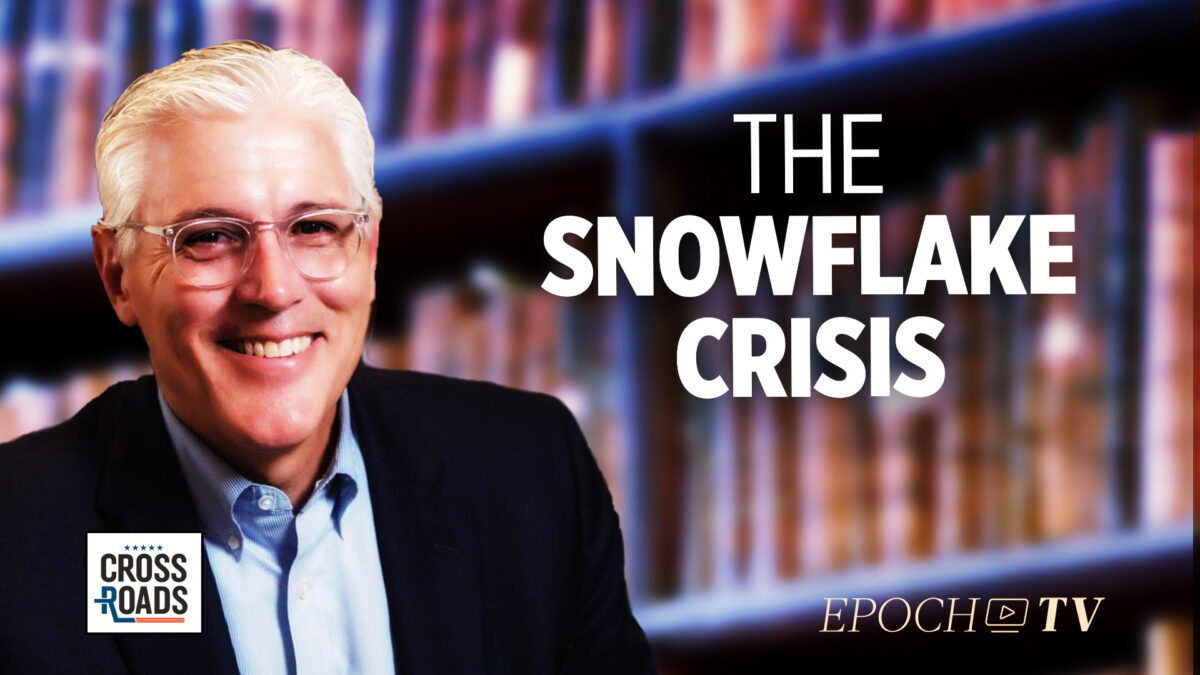 Dr. Everett Piper, author of “Grow Up: Life Isn’t Safe But It’s Good,” told Epoch TV’s “Crossroads” Program that cancel culture’s relentless demand for safe spaces is making America’s youth emotionally fragile, less able to cope with hardship, and more prone to advocating for an ever bigger government role in allaying insecurity and providing safety at the expense of liberty.

Piper, who served as president of Oklahoma Wesleyan University for 17 years, said that his earlier warnings, that coddling America’s youth by acquiescing to demands for “safe spaces” and “trigger warnings” would lead to a sad and dangerous infantilization of the American spirit, are increasingly coming to pass.

“The ‘snowflakes’ have graduated,” Piper said. “And they now have jobs at Google and Amazon and Apple and Twitter and even Major League Baseball, where they’re carrying their cancel culture, their demands for safety, into our country at large, and they’re silencing everyone who disagrees with them. This is ideological fascism, it is not intellectual freedom.”

Piper’s complaint about “snowflakes” having a growing impact on the political tenor of major American corporations is part of what Republicans—and conservatives more broadly—have started to more vocally criticize as “woke capitalism,” or big business’s embrace of progressive positions on issues like LGBTQ and voting rights.

Sen. Marco Rubio (R-Fla.), fumed in a Sunday op-ed in The New York Post that “corporate America eagerly dumps woke, toxic nonsense into our culture, and it’s only gotten more destructive with time,” adding, “today, corporate America routinely flexes its power to humiliate politicians if they dare support traditional values at all.”

“Multinational firms threaten boycotts over pro-life legislation. Cowardly sports leagues pull events out of states that dare pass legislation they don’t like. Firms like Delta parrot woke talking points, even as they cut deals with China, lending Beijing legitimacy and funding as it commits genocide in Xinjiang,” Rubio wrote, referring to the atrocities committed against the Uyghur community by the Chinese Communist Party, and to Major League Baseball pulling an event out of Georgia in protest against the state’s new election integrity law.

A lobbying and communications outfit with deep ties to GOP leadership argued in a memo in mid-March that the rise of “woke CEOs embracing avant-garde social agendas” is fueling a populist surge in the Republican Party that threatens to upend its longstanding pact with big business.

“These campaigns will be met with the same strength that any other polluter should expect,” Rubio wrote, suggesting that “woke” corporations would face Republican backlash for their activism.

Much in the same tone, Sen. Josh Hawley (R-Mo.) on April 20 called for the Republican Party to reduce its financial dependence on big companies, while urging the breakup of some mega-corporations that exert too much power on American politics and seek “to run our democracy.” Already, Hawley has introduced the Bust Up Big Tech Act and the Trust-Busting for the Twenty-First Century Act, which would strengthen antitrust enforcement to pursue the breakup of dominant, anticompetitive firms.

“A small group of woke mega-corporations control the products Americans can buy, the information Americans can receive, and the speech Americans can engage in. These monopoly powers control our speech, our economy, our country, and their control has only grown because Washington has aided and abetted their quest for endless power,” Hawley said in a statement.

Piper said that, at its core, corporate “woke-ism” was a phenomenon closely related to and fueled by the “demand to be comfortable rather than have your character built.”

“We’ve set aside the higher values, the higher ideas, the higher ideals of freedom and liberty,” Piper said. “We’ve allowed our freedom to be stolen from us because as children, we want to cower in the corner and demand that we be safe. And we’ve been willing to do that at the expense of essentially everything that the western civilization has stood for, and that is individual liberty.”

Joshua Philipp contributed to this report.