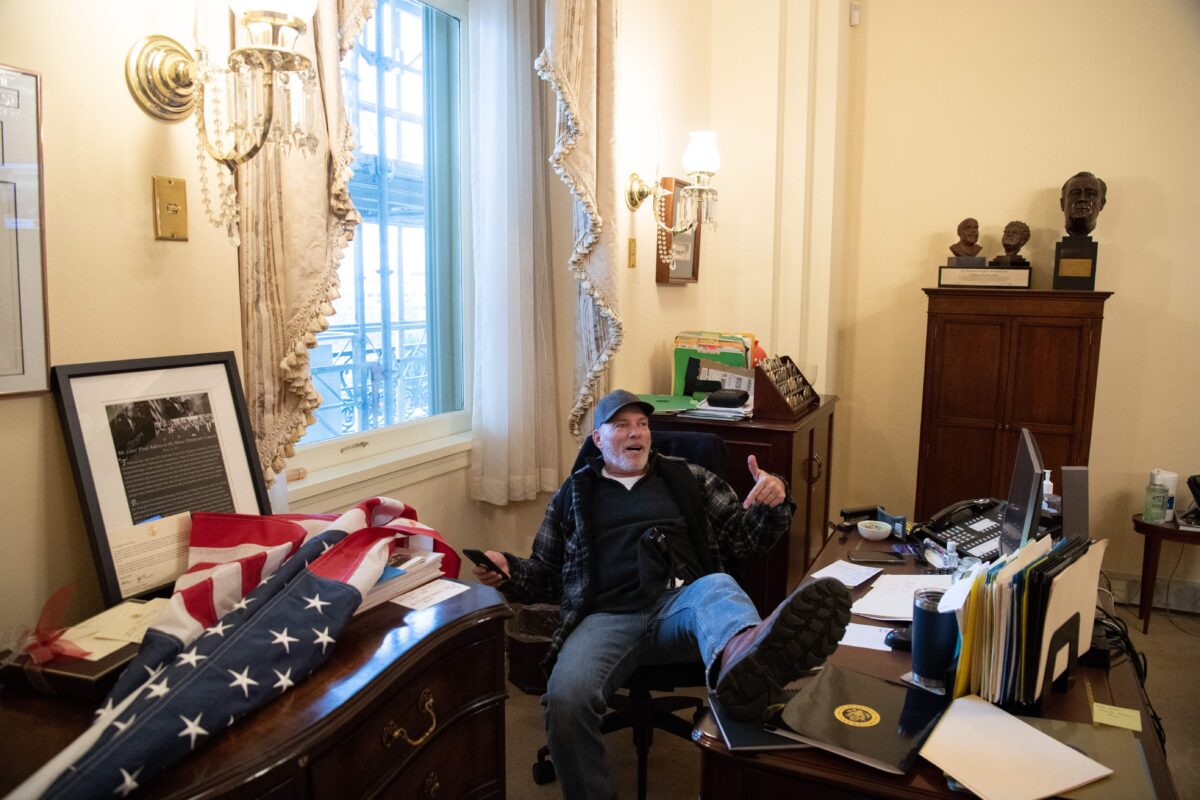 The man who placed his feet on House Speaker Nancy Pelosi’s (D-Calif.) desk during the breach of the U.S. Capitol on Jan. 6 has been released from jail pending trial.

A judge on Tuesday deemed Richard Barnett not dangerous enough to stay in jail as he awaits trial for partaking in the breach. Barnett will be released back home to Arkansas and will have a GPS monitor.

Judge Christopher “Casey” Cooper, in announcing him to home confinement, said, “The notion that the events of Jan. 6 were a legitimate or excusable social protest against ruling elites or worse yet a reaction to some people in society feeling that they have been unfairly scapegoated for racism is, in a word, absurd,” according to reporters who were there at the hearing. Cooper, in releasing Barnett, said he should consider it “a test.”

Barnett has been charged with a felony count of entering the Capitol with a dangerous weapon and is accused of bringing a stun gun into the building. He also faces misdemeanor counts of unlawful entry to a restricted building, disorderly conduct, and theft.

Prosecutors have said he could face six years in prison if convicted on all the counts. Barnett has pleaded not guilty.

Barnett’s attorney, Joseph D. McBride, told CNN on Wednesday that discussions about a guilty plea have not taken place and Barnett has no interest in a preliminary offer from prosecutors for a plea deal.

“As of now, we are awaiting further discovery from the government, and we are looking to proceed to trial. Should an acceptable offer materialize between now and then, then we will give it due and proper consideration,” McBride said in the interview.

McBride said that Barnett’s actions on Jan. 6 are consistent with his personality of being “a jokester” or a “funny man.”

“My client understands that his statements and that the—accepting the allegation as true, the note that, for the sake of argument, of course, the note that he’s alleged to have left was all made in bad taste,” he told CNN.

Elaborating on why he sat at Pelosi’s desk, he added that “Mr. Barnett is a funny man. He’s a jokester, he doesn’t have a real clear sense of boundaries. If he could take it back, he likely would. But we can’t unring the bell at this point.”

In recent days, the treatment of some of the participants in the Capitol breach has drawn scrutiny from two top Democrats.

Sens. Elizabeth Warren (D-Mass.) and Dick Durbin (D-Ill.) voiced concerns last week about several dozen or so Jan. 6 detainees who are being held in solitary confinement.

“Solitary confinement is a form of punishment that is cruel and psychologically damaging,” Warren said in an interview with Politico. “And we’re talking about people who haven’t been convicted of anything yet.”