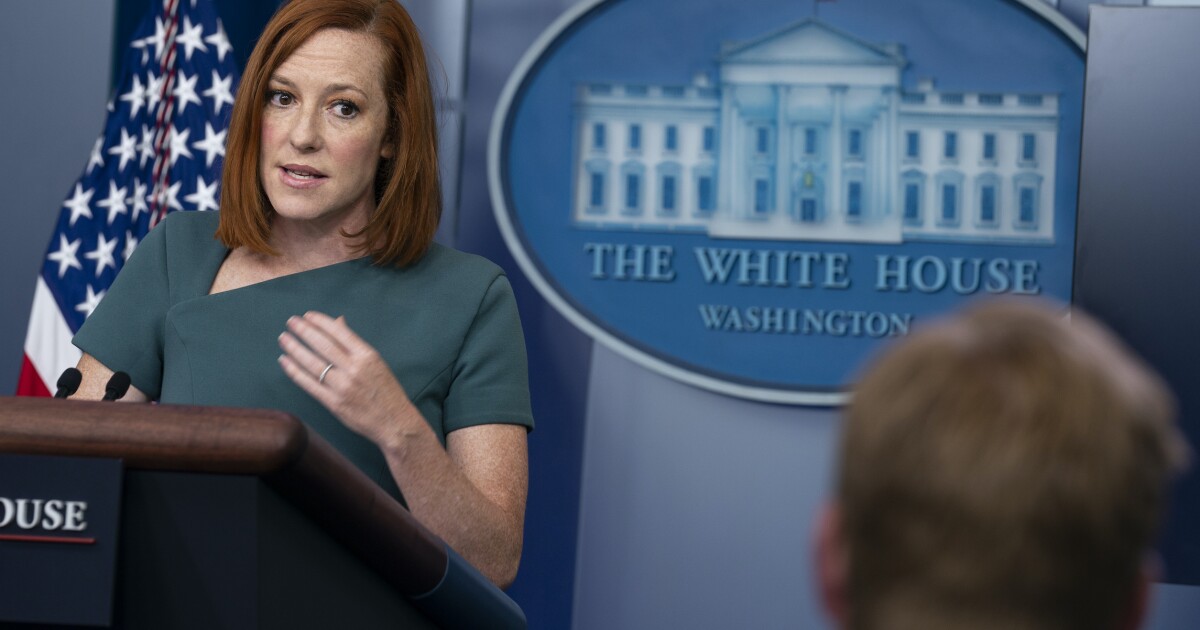 White House press secretary Jen Psaki claimed Thursday there were “a number of officers” who died the day of the Capitol riot, despite a D.C. medical examiner's office determining that officer Brian Sicknick died the day after as a result of a stroke.

Psaki made the comments during a White House press conference when she was asked about an open letter by Metropolitan Police Department officer Michael Fanone earlier this month, in which he discussed the “physical injuries” and “psychological trauma” suffered by officers that day and asked elected leaders to “recognize” fully the actions of officers who responded to the riot.

“I’m happy to check on the status of the letter,” Psaki said. “Obviously, the president's view is that there were a number of officers who lost their lives, paid a tremendous sacrifice, on a day that will be a stain on our democracy for many years to come, and certainly, many who survived. This will be a long-lasting trauma. I’d have to check on the letter and the status of that.”

The Chief Medical Examiner’s Office told the Washington Examiner in April that Sicknick’s “cause of death” was “acute brainstem and cerebellar infarcts due to acute basilar artery thrombosis” (a stroke), and the “manner of death” was “natural.” The medical examiner said Sicknick was sprayed with a chemical substance at about 2:20 p.m. on Jan. 6, collapsed at the Capitol at about 10 p.m., and was transported by emergency services to a local hospital. He died at about 9:30 p.m. on Jan. 7. Diaz told the Washington Post that Sicknick died after suffering two strokes, did not suffer an allergic reaction to chemical irritants, and bore no evidence of either external or internal injuries but contended that “all that transpired played a role in his condition.“

The White House did not immediately respond to the Washington Examiner’s request for comment.

In the days following the Capitol riot, Metropolitan Police officer Jeffrey Smith and Capitol Police officer Howard Liebengood both died by suicide, which may be what Psaki was referring to. The families of those officers want their deaths to be recognized as in the “line of duty.” During House testimony in January, acting Metropolitan Police Chief Robert Contee said that Smith and Liebengood “took their own lives in the aftermath of that battle” and that “we honor the service and sacrifices of officers Brian Sicknick, Howard Liebengood, and Jeffery Smith and offer condolences to all the grieving families.”

In its initial statement on Sicknick, the Capitol Police said he “was injured while physically engaging with protesters” and that he “was taken to a local hospital where he succumbed to his injuries.” The Capitol Police released a statement after the medical examiner’s findings were made public last month, saying that “this does not change the fact Officer Sicknick died in the Line of Duty.”

Psaki made the comments the day after the House of Representatives voted by 252-175 to approve the creation of a commission to investigate the events of Jan. 6, with 35 Republicans voting for it. The proposal’s fate in the Senate remains uncertain, with multiple Republicans casting doubt on the idea.

The Justice Department investigation has often pointed to violence conducted against officers by rioters and has focused on actions taken by members of groups such as the Proud Boys and the Oath Keepers. Hundreds of police officers responded to the Capitol riot, and officials have said dozens were injured.

The Justice Department announced in April that it would not pursue charges against the U.S. Capitol Police officer who fatally shot 35-year-old Air Force veteran and Trump supporter Ashli Babbitt inside the Capitol during the riot as she attempted to climb through a window near the Speaker's Lobby, determining there was “insufficient evidence” to support a criminal prosecution.