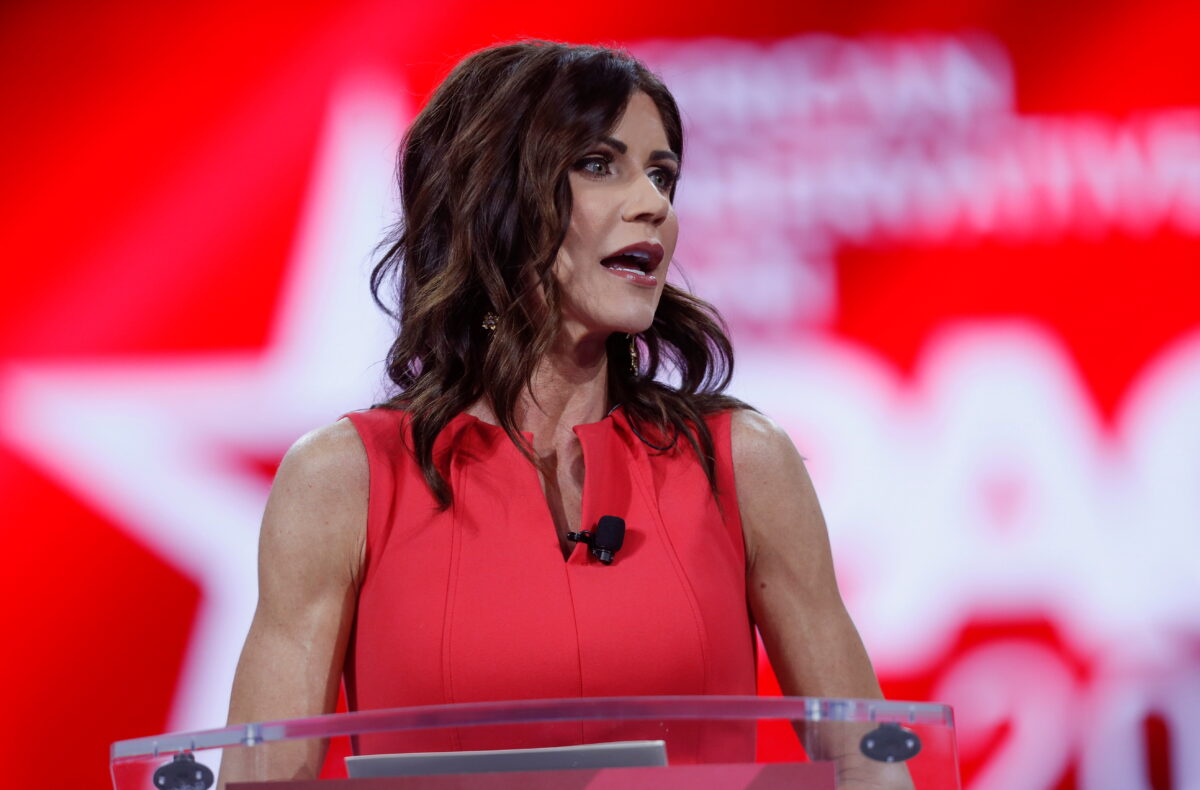 South Dakota Gov. Kristi Noem said she signed a pledge this week that aims to restore “patriotic education” as liberals push critical race theory in the school curriculum. Republicans like Noem have criticized the race curriculum for sowing division and hate, and teaching anti-American values to students.

In a Twitter post earlier this week, Noem said she is the first candidate in the country to sign a promise called “The 1776 Pledge to Save Our Schools.”

“Teaching our children & grandchildren to hate their own country & pitting them against one another on the basis of race or sex is shameful & must be stopped. I’m proud to be the 1st candidate in America to sign ‘The 1776 Pledge to Save Our Schools,” wrote Noem.

The pledge, signed by Noem, promises to take steps to restore “honest, patriotic education that cultivates in our children a profound love for our country,” and teach “that all children are created equal, have equal moral value under God, our Constitution, and the law.” It also will “Prohibit any curriculum that pits students against one another on the basis of race or sex” and “Prevent schools from politicizing education.”

“In partnership with @1776ActionOrg, @RealBenCarson is helping to stop this woke, anti-American indoctrination at the state and local level & this pledge is a vital tool for clarity & accountability,” wrote Noem in the Twitter post.

Noem penned an opinion piece for Fox News with former Housing and Urban Development Secretary Ben Carson on Monday, dubbing critical race theory as a “radical concept” and writing that the curriculum “pits them against one another on the basis of race and gender under the guise of achieving ‘equity.’”

The organization, 1776 Action, was created to counter ideas like critical race theory and advocate for education based on former President Donald Trump’s 1776 commission, which was created to bring back the teaching of the founding documents.

The governor’s announcement comes as Republicans across the nation are trying to prevent the teaching of critical race theory, and are expressing concern about the Biden administration prioritizing the funding of educational programs that incorporate the ideas of the 1619 Project into their teaching of U.S. history and civics, reorienting bipartisan programs “away from their intended purposes toward a politicized and divisive agenda.”

In a proposed new rule (pdf) released April 19, the Education Department outlined new priority criteria for a $5.3 million American History and Civics Education grant, as well as exemplary materials for K-12 educators to use. Specifically, the Education Department cited the “1619 Project,” and critical race theorist Ibram X. Kendi’s “antiracist idea” as leading examples of the kind of content it wants to use taxpayer dollars to promote in history and civics classrooms across the country.

The “1619 Project,” inaugurated with a special issue of The New York Times Magazine, attempts to cast the Atlantic slave trade as the dominant factor in the founding of America instead of ideals such as individual liberty and natural rights. The initiative has been widely panned by historians and political scientists, with some critics calling it a bid to rewrite U.S. history through a left-wing lens.

“Our nation’s youth do not need activist indoctrination that fixates solely on past flaws and splits our nation into divided camps. Taxpayer-supported programs should emphasize the shared civic virtues that bring us together, not push radical agendas that tear us apart,” McConnell and his GOP colleagues wrote in the letter (pdf).

Nikole Hannah-Jones, the creator of the 1619 Project responded to the GOP criticism of the project during an interview with MSNBC on Monday, saying that the 1619 curriculum being allowed in schools is a matter of free speech.

“This isn’t a project about trying to teach children that our country is evil, but it is a project trying to teach children the truth about what our country was based upon, and it’s only in really confronting that truth—slavery was foundational to the United States,” and 100 years of legalized discrimination, said Hannah-Jones.  “Mitch McConnell and others like him want for our children to get a propagandistic nationalistic understanding of history that is not about facts, but it is about how they would want to pretend that our country is.”