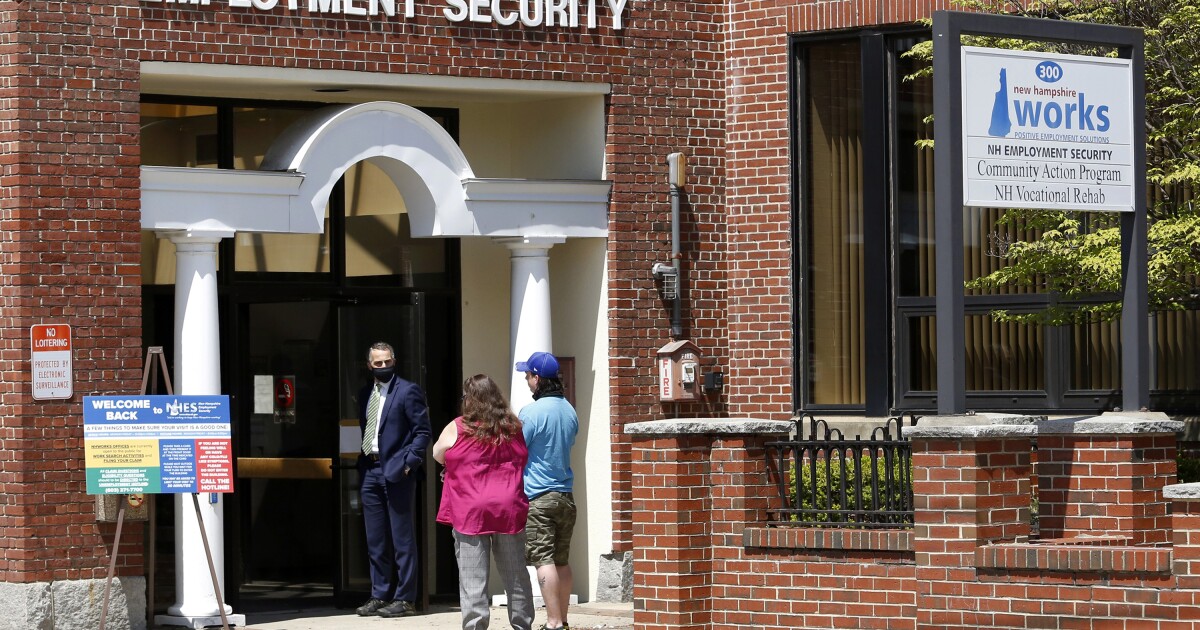 There were 668 new applications for state jobless benefits filed for the week that ended July 3 – a decline of 627 from the previous week, the federal agency reported on Thursday.

Continuing jobless claims – which lag behind a week but are viewed as a barometer of the unemployment situation – totaled 14,173 in the week ending June 26, an increase of 3,647 over the previous week.

There were 27 new claims last week for federal Pandemic Unemployment Assistance, a federally backed program that covers workers not eligible for traditional state unemployment benefits, dropping by 2 claims over the preceding week. The state has ended its participation in the PUA program, but under federal law they cannot pull the plug on beneficiaries immediately.

The state has pumped out more than $1.8 billion in federal and state unemployment benefits to jobless workers since March 2020, when the COVID-19 outbreak began.

New Hampshire's jobless rate dropped slightly to 2.5% in May, according to the New Hampshire Employment Security, one of the lowest rates in the nation.

Gov. Chris Sununu has boasted that the state had the lowest jobless rate for a second month in a row.

“As we head into a booming summer, our pro-growth, pro-jobs agenda is paying dividends for the citizens and small businesses of our state,” the Republican said recently.

Despite the gains, New Hampshire is facing a hiring crunch with tens of thousands of jobs unfilled as the state's busy summer tourist season gets underway.

Sununu has taken steps to lure workers back to their jobs amid a shortage of labor as the state eases COVID-19 restrictions and fully reopens its economy.

Those actions include bringing back a work search requirement and offering workers $500 to $1,000 bonuses if they get a job and keep it for at least eight weeks.

New Hampshire is no longer participating in PUA and other federal unemployment programs, including a $300 per week extra benefit.

Employers say generous unemployment benefits have given some laid-off workers more income from federal and state payments than they normally make on the job, which has made it harder to bring those people back to work.

Nationally, there were 373,000 new claims filed in the week that ended July 3, an increase of 2,000 from the previous week, according to the labor department.

Continuing claims, which lag behind a week, dropped by 145,000 to 3.33 million nationally for the week that ended June 26. The numbers reflect that a number of states have ended participation in federal employment programs.

More than 14.2 million Americans were still receiving state or federal jobless benefits in the week ending June 19, the agency reported.