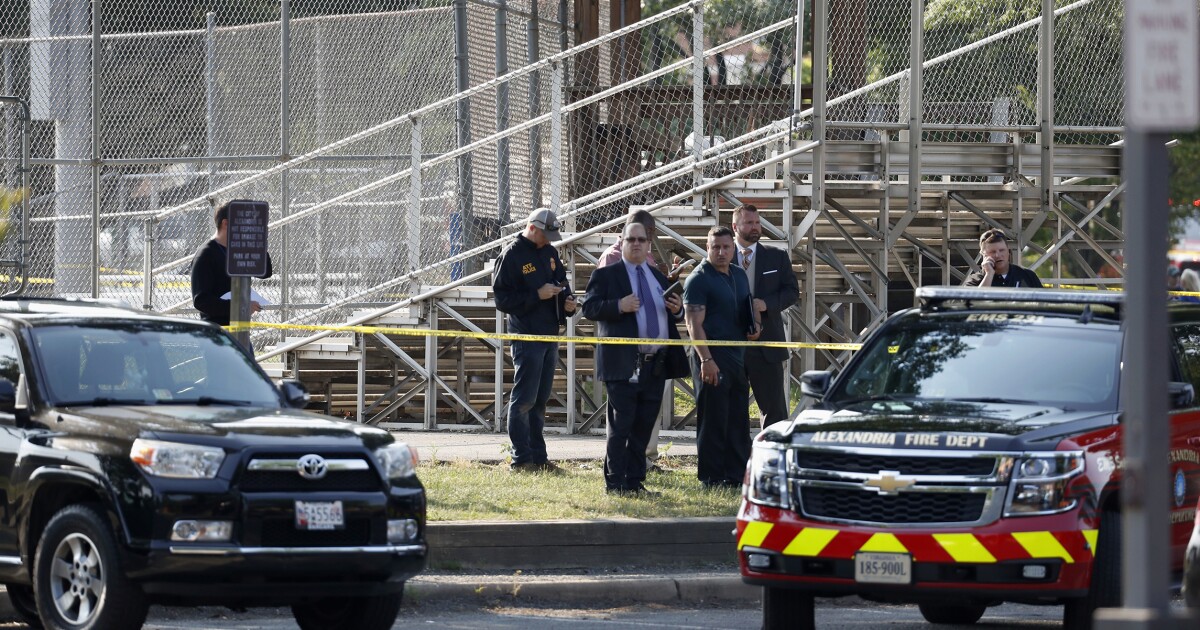 The FBI quietly admitted Friday that the 2017 Alexandria, Virginia, baseball field shooting that nearly killed Rep. Steve Scalise has been classified as “domestic terrorism” carried out by a “domestic violent extremist” targeting Republicans after the bureau previously classified it as “suicide by cop.”

The revelation appears in the middle of an appendix on page 35 of a 40-page FBI-DHS report released on Friday titled “Security Strategic Intelligence Assessment and Data on Domestic Terrorism.” In a section describing approximately 85 different “FBI-Designated Significant Domestic Terrorism Incidents in the United States from 2015 through 2019,” the Alexandria baseball field shooting appears, with the FBI categorizing the perpetrator as a “Domestic Violent Extremist” and describing the incident thusly: “An individual with a personalized violent ideology targeted and shot Republican members of Congress at a baseball field and wounded five people. The subject died as a result of engagement with law enforcement.”

In June 2017, James Hodgkinson, a man from Illinois who was living out of a van in Alexandria, opened fire at Eugene Simpson Stadium Park after asking GOP Rep. Jeff Duncan, who was leaving practice early, if the players were Republicans or Democrats. Hodgkinson struck Scalise in the hip, hit lobbyist Matt Mika in the chest, and injured two U.S. Capitol Police officers, Crystal Griner and David Bailey. Scalise nearly bled to death and required multiple surgeries before returning to Congress.

Hodgkinson, an avid liberal and supporter of Democratic presidential primary candidate and Vermont Sen. Bernie Sanders, was killed by law enforcement. He had posted on Facebook that “Trump is a Traitor. Trump Has Destroyed Our Democracy. It's Time to Destroy Trump & Co.” and joined other groups such as “Terminate The Republican Party” and “Join The Resistance Worldwide!!”

Last month, the FBI had said that the shooting would have been classified as “domestic terrorism” if it happened today, but that seemed to dance around the issue of how it should properly be classified. Earlier in April, Republican congressmen had criticized the decision by the FBI, led in an acting capacity at the time by Andrew McCabe, not to label the shooting by Hodgkinson as domestic terrorism despite his targeting of elected Republican leaders as they practiced for the annual congressional baseball game, calling upon FBI Director Christopher Wray, who has led the bureau since August 2017, to provide answers.

Scalise and other Republicans sent Wray a letter on Tuesday demanding answers, noting that Hodgkinson had “a potential ‘hit list’ of six Members of Congress – Republicans Trent Franks, Jim Jordan, Morgan Griffith, Scott DesJarlais, Jeff Duncan, and Mo Brooks – in his pocket” — yet the FBI had classified it as “suicide by cop.” The letter, signed by everyone at the practice and everyone on the purported hit list, was “demanding answers and accountability from the FBI.” The letter added: “We all agree that violent extremism of any kind must be rooted out and addressed by our law enforcement agencies. But we cannot presume to understand the scope of this issue if our law enforcement agencies do not investigate all instances of extremism, regardless of motivating ideology, with equal vigor.”

The new report from the FBI stated that the bureau was “conducting approximately 1,000 pending domestic terrorism investigations each year” from 2017 through 2019 and that from 2015 to 2019, approximately 846 domestic terrorism subjects were arrested by or in coordination with the bureau. The report said, “The greatest terrorism threat to the Homeland we face today is posed by lone offenders, often radicalized online, who look to attack soft targets with easily accessible weapons” and that “many of these violent extremists are motivated and inspired by a mix of socio-political goals and personal grievances against their targets.”

During a late April hearing in front of a House appropriations subcommittee, Jill Sanborn, the executive assistant director of the FBI's National Security Branch, acknowledged it was an intentional attack on lawmakers and that, if it happened today, Wray’s FBI would consider it to be domestic terrorism.

Rep. Robert Aderholt argued last month that “classifying the attack as a suicide by cop really defies logic,” and the Alabama Republican asked Sanborn if “the FBI cleared up this by reclassifying the incident as an act of domestic terrorism.”

“It’s fair to say that the shooter was motivated by a desire to commit an attack on members of Congress and then knowing by doing so he would likely be killed in the process,” Sanborn said. “Cases like this are challenging because there were, as you mentioned, a couple clues left behind, but he died in the process, never allowing us to fully examine through, say, an interview, his motivation. There are also indicators that the shooter intended the shooting to be his final act on earth, but those things are not inconsistent with someone who is motivated by a variety of factors to commit violent acts based on a blend of ideological or personal motivations, and this conduct is something that today we would characterize as a domestic terrorism event.”

Sanborn added: “This is also a good example of … a trend we started to see probably 2016-ish, which is that the motivation and sort of what drove someone to mobilize is a very personalized grievance that they hold, which is something different from the domestic terrorism threat that we saw in years past.”

The Republican asked why the FBI hadn’t classified it as domestic terrorism in the first place, and she replied, “I would have to get back to you on the specifics of what that rationale was, but in going back and looking at it, and honestly, at the trend of that personalized grievance motivation, it fits squarely into the phenomena that the director and I have talked about often, which is this very personalized sort of blending of ideologies that motivates somebody.”

Rep. Brad Wenstrup, an Ohio Republican, broke the news during a House Intelligence Committee meeting earlier in April that the FBI privately informed Congress in November 2017 that it considered the shooting to be “suicide by cop.”

“Much to our shock that day, the FBI concluded that this was a case of the attacker seeking suicide by cop,” Wenstrup said. “Director, you want suicide by cop, you just pull a gun on a cop. It doesn't take 136 rounds. It takes one bullet. Both the DHS and the [Office of the Director of National Intelligence] published products labeling this attack as a domestic violent extremism event, specifically targeting Republican members of Congress. The FBI did not.”

Wray called the shooting “the horrific, horrific attack at the baseball field on that day.”

“The evidence in this case establishes beyond a reasonable doubt that the suspect, fueled by rage against Republican legislators, decided to commit an act of terrorism as that term is defined by the Code of Virginia,” the report read. “The suspect, using a lawfully-purchased assault rifle and handgun, ambushed a peaceful assembly of people practicing baseball and began to fire indiscriminately in an effort to kill and maim as many people as possible.”

Virginia's code defines terrorism as “an act of violence … committed with the intent to intimidate the civilian population at large or influence the conduct or activities of the government … through intimidation.” But a week after the shooting, an FBI report said it “does not believe there is a nexus to terrorism.”