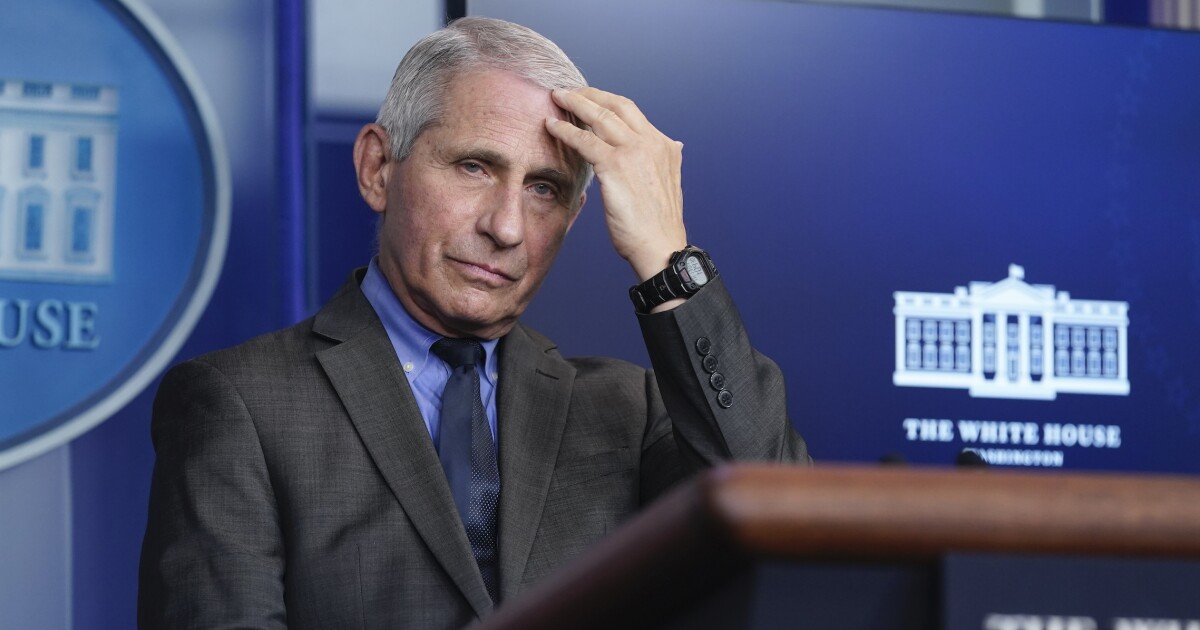 Dr. Anthony Fauci is now calling for further investigation into the origins of COVID-19 in a departure from his dismissal of the Wuhan lab leak hypothesis last year.

President Joe Biden's chief medical adviser, who has led the National Institute of Allergy and Infectious Diseases since 1984, said he was unsure when asked by Politifact‘s Katie Sanders whether he was still confident that COVID-19 emerged naturally.

“No actually … No, I’m not convinced about that. I think that we should continue to investigate what went on in China until we find out to the best of our ability exactly what happened,” Fauci said during the May 11 interview. “Certainly the people who’ve investigated it say it likely was the emergence from an animal reservoir that then infected individuals, but it could’ve been something else and we need to find that out. So, you know, that’s the reason why I said I’m perfectly in favor of any investigation that looks into the origin of the virus.”

Over a year ago, during a May 4, 2020 National Geographic interview, Fauci laughed off the possibility that COVID-19 escaped from a lab when science editor Nsikan Akpan asked, “Do you believe or is there evidence that SARS-CoV-2 was made in the lab in China or accidentally released from a lab in China?”

Fauci argued that “if you look at the evolution of the virus in bats, and what's out there now is very, very strongly leaning toward this could not have been artificially or deliberately manipulated — the way the mutations have naturally evolved.” He claimed that “a number of very qualified evolutionary biologists have said that everything about the stepwise evolution over time strongly indicates that it evolved in nature and then jumped species.”

“If you accept the premise, which is very strongly supported by scientific evidence, that it was not deliberately mutated and deliberately changed, and you say, if it was in the wild and evolving, the likelihood it jumped species naturally, someone will say, ‘Well, maybe somebody took it from the wild, put it in the lab, and then it escaped from the lab.' But that means it was in the wild to begin with!” he continued.

Fauci then laughed as he continued, claiming not to understand why the possibility that COVID-19 had escaped from a lab was being raised.

Officials from both the Trump and Biden administrations have said the Chinese government worked for over a year to thwart an independent investigation into the origins of the virus, which has killed 3.45 million people worldwide, according to Johns Hopkins University, and both administrations have cast doubt on the manner in which the study from China and the World Health Organization was conducted in early 2021. Though the WHO-China report said a jump from animals to humans was most likely, Trump officials have pointed to an accidental escape from the Wuhan Institute of Virology as a highly plausible origin for the pandemic.

A State Department fact sheet released in mid-January contended Wuhan lab researchers “conducted experiments involving RaTG13, the bat coronavirus identified by the WIV in January 2020 as its closest sample to SARS-CoV-2 (96.2% similar)” and that the lab “has a published record of conducting ‘gain-of-function' research to engineer chimeric viruses.” The fact sheet added the lab “has engaged in classified research, including laboratory animal experiments, on behalf of the Chinese military.”

In March, Tedros Adhanom Ghebreyesus, the head of the WHO, said the joint team had not fully investigated the potential of COVID-19 originating through an accidental leak from a Wuhan lab, a hypothesis that he insisted needed further study despite it being deemed “extremely unlikely” by the team, which claimed the most likely origin was a jump from animal to animal to human.

House Intelligence Committee Republicans released a report on the coronavirus pandemic on Wednesday and pointed the finger directly at the Wuhan Institute of Virology.

“Unfortunately, Beijing has hindered the conduct of a full, credible investigation. There is overwhelming circumstantial evidence, however, to support a lab leak as the origination of COVID-19, while there is no substantive evidence supporting the natural zoonosis hypothesis,” the House GOP report concluded.

Fauci and Francis Collins, the leader of the National Institutes of Health, are adamant in insisting that NIH did not fund “gain-of-function” research at the Wuhan Institute of Virology. Gain-of-function research is defined by the Department of Health and Human Services as research “that improves the ability of a pathogen to cause disease” in an effort to “enable assessment of the pandemic potential of emerging infectious agents.” It warns that these studies “may entail biosafety and biosecurity risks.” Fauci and Collins also admit they don’t actually know what the secretive Chinese lab at the center of COVID speculation has been up to.

EcoHealth Alliance received at least $3.7 million from 2014 to 2020, and Peter Daszak, a key member of the WHO-China joint study team and the leader of the EcoHealth Alliance, steered at least $600,000 in National Institutes of Health funding to the Wuhan lab for bat coronavirus research. Daszak criticized the United States for appearing skeptical of the WHO’s findings and defended China to Communist Party-linked outlets. U.S. Embassy officials in China raised concerns in 2018 about lax biosecurity at the Wuhan lab led by Shi Zhengli, dubbed “bat woman,” who worked closely with Daszak.

Earlier this month, Sen. Rand Paul asked whether Fauci still supported sending money to the Wuhan lab, to which the Biden health adviser replied, “We do not send money now to the Wuhan virology institute.” When pressed again, Fauci said, “The SARS-CoV-1 originated in bats in China. It would’ve been irresponsible of us if we did not investigate the bat viruses and serology to see who might have been infected in China.”

Paul, a Kentucky Republican, also asked Fauci whether he would “categorically say that COVID-19 could not have occurred through serial passage in a laboratory?” to which Fauci replied, “I do not have an accounting of what the Chinese may have done, and I am fully in favor of any further investigation of what went on in China. However, I will repeat again — the NIH and NIAID categorically has not funded gain-of-function research to be conducted in the Wuhan Institute of Virology.”

Paul also pointed to Dr. Ralph Baric at the Gillings School of Global Public Health at UNC-Chapel Hill “collaborating” with Shi on experiments related to the original SARS virus years ago before again asking Fauci whether he still supports the NIH funding the Wuhan lab.

“With all due respect, you are entirely and completely incorrect — that the NIH has not ever and does not now fund gain-of-function research in the Wuhan Institute of Virology,” Fauci replied, adding, “Dr. Baric is not doing gain-of-function research, and if it is, it is according to the guidelines, and it is being conducted in North Carolina, not in China.”

Baric was among the many scientists who signed a letter in Science magazine this month arguing that “theories of accidental release from a lab and zoonotic spillover both remain viable.”

Paul contended that Fauci was “allowing super viruses to be created.”

“I fully agree that you should investigate where the virus came from, but again, we have not funded gain-of-function research on this virus in the Wuhan Institute of Virology,” Fauci said.

During his PolitiFact interview, Fauci said that “in a very minor collaboration, as part of a subcontract of a grant, we had a collaboration with some Chinese scientists” and said that what Paul had done “conflated” that with NIH being “involved in creating the virus, which is the most ridiculous, majestic leap I’ve ever heard of.”

“It was said in an accusatory way that just made no sense and was not based on any fact at all,” he added.

After a pause in 2014, HHS announced the creation of the Potential Pandemic Pathogen Care and Oversight Framework in 2017, which was ostensibly set up to review any potential grants that might involve gain-of-function research, but the 2019 renewal of the EcoHealth Alliance grants were not subjected to the P3CO review.

Richard Ebright, a professor of chemistry and chemical biology at Rutgers University, told the Washington Examiner last year that COVID-19 arising in nature or escaping through a lab accident were both plausible.

Ebright said earlier this month that grants provided by NIH to EcoHealth Alliance met the definition of “gain-of-function research of concern” under the 2014 pause and the definition for “potential pandemic pathogen enhancement” under the P3CO Framework. Ebright also noted that the research “was published with an acknowledgment” of the NIH grant. The professor concluded that “the Wuhan lab used NIH funding to construct novel chimeric SARS-related coronavirus with the ability to infect human cells and laboratory animals and that “the research was — unequivocally — gain of function research.”