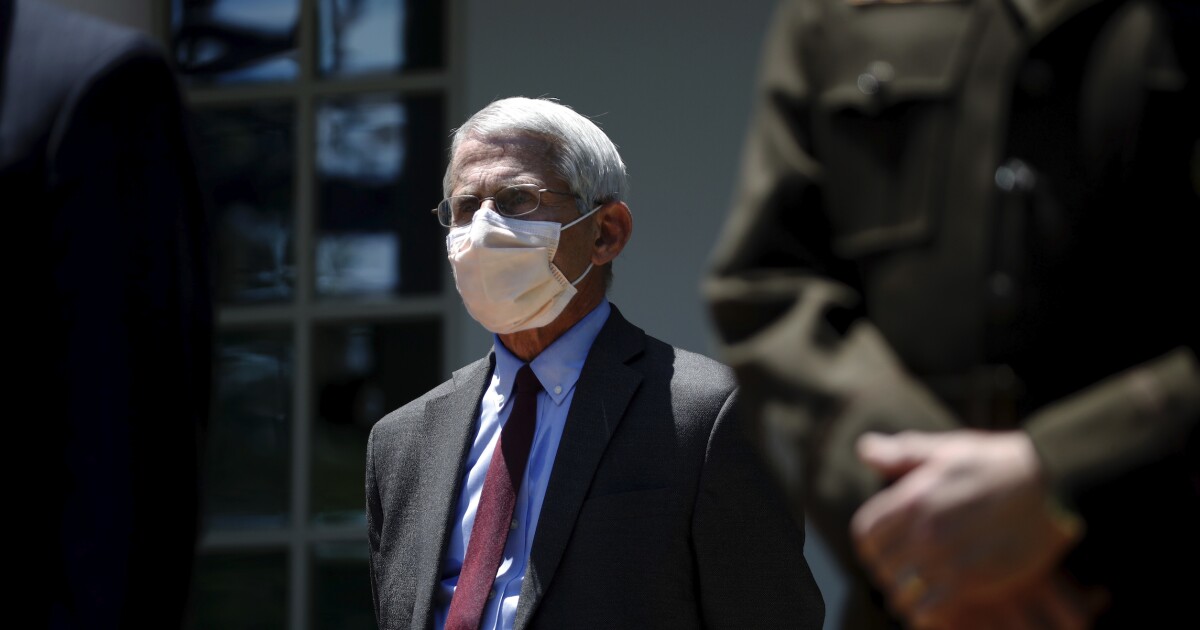 Dr. Anthony Fauci denied that the National Institutes of Health had funded gain-of-function research at the Wuhan lab U.S. intelligence is investigating as a possible origin of the COVID-19 pandemic during a testy exchange with Republican Sen. Rand Paul.

Officials from both the Trump and Biden administrations have said that the Chinese government worked for over a year to thwart an independent investigation into the origins of the virus, which has killed 3.3 million people worldwide, according to Johns Hopkins University, and both administrations cast doubt on the manner in which the WHO-China study was conducted in early 2021.

Though the WHO-China report said a jump from animals to humans was most likely, Trump officials have pointed to an accidental escape from the Wuhan Institute of Virology as a highly plausible origin for the pandemic.

HHS defines gain-of-function research as research “that improves the ability of a pathogen to cause disease, help define the fundamental nature of human-pathogen interactions, thereby enabling assessment of the pandemic potential of emerging infectious agents” and warns that gain-of-function studies “may entail biosafety and biosecurity risks.”

During a Senate hearing on the coronavirus, Paul first pointed to the work between Baric and Shi as evidence of U.S. support for gain-of-function research in China.

“This gain-of-function research has been funded by the NIH,” Paul contended. “The collaboration between the U.S. and the Wuhan institute continues.” He asked: “Dr. Fauci, do you still support funding of the NIH funding of the lab in Wuhan?”

Fauci, the director of the U.S. National Institute of Allergy and Infectious Diseases and the chief medical adviser to President Joe Biden, replied: “Sen. Paul, with all due respect, you are entirely and completely incorrect — that the NIH has not ever and does not now fund gain-of-function research in the Wuhan Institute of Virology.”

An article in Nature Medicine published in 2015 following a study by Baric, Shi, and others noted that “the emergence of severe acute respiratory syndrome coronavirus (SARS-CoV) and Middle East respiratory syndrome (MERS)-CoV underscores the threat of cross-species transmission events leading to outbreaks in humans.”

The paper added: “Here we examine the disease potential of a SARS-like virus, SHC014-CoV, which is currently circulating in Chinese horseshoe bat populations. Using the SARS-CoV reverse genetics system, we generated and characterized a chimeric virus expressing the spike of bat coronavirus SHC014 … The results indicate that group 2b viruses encoding the SHC014 spike in a wild-type backbone can … replicate efficiently in primary human airway cells and achieve in vitro titers equivalent to epidemic strains of SARS-CoV.” The scientists said that “our work suggests a potential risk of SARS-CoV re-emergence from viruses currently circulating in bat populations.”

An “editor’s note” added to the article in March 2020 claimed, “We are aware that this article is being used as the basis for unverified theories that the novel coronavirus causing COVID-19 was engineered. There is no evidence that this is true; scientists believe that an animal is the most likely source of the coronavirus.”

EcoHealth Alliance has received at least $3.7 million from 2014 to 2020, and Daszak, who was a key member of the WHO-China joint study team, steered at least $600,000 in NIH funding to the Wuhan lab for bat coronavirus research, criticizing the Biden administration earlier this year for appearing skeptical of the WHO’s findings and defending China to Chinese Communist Party-linked outlets. U.S. Embassy officials in China raised concerns in 2018 about lax biosecurity at the Wuhan lab led by Shi, who had worked with EcoHealth Alliance and Daszak.

Paul asked if Fauci still supported sending money to the Wuhan lab, to which the Biden health adviser replied: “We do not send money now to the Wuhan virology institute.”

The Kentucky Republican then referenced NIH grants going to EcoHealth, which then provided sub-awards to the Wuhan lab, and repeated, “Do you support the money from NIH that was going to the Wuhan institute?”

Fauci replied: “Let me explain why that was done. The SARS-CoV-1 originated in bats in China. It would’ve been irresponsible of us if we did not investigate the bat viruses and serology to see who might have been infected in China.”

Paul retorted: “Or perhaps it would be irresponsible to send it to the Chinese government that we may not be able to trust with this knowledge and with these incredibly dangerous viruses.” The Republican then referred to “government scientists like yourself who support gain-of-function research” before Fauci interrupted him.

“I don’t support gain-of-function research in China,” Fauci said. “You’re saying things that are not correct.”

Tedros Adhanom Ghebreyesus, the head of the World Health Organization, said in March that the joint WHO-China team had not fully investigated the potential of COVID-19 originating through an accidental leak from a Wuhan lab, a hypothesis he insisted still needed further study despite being essentially dismissed by the WHO-China team.

Paul asked Fauci: “Will you in front of this group categorically say that COVID-19 could not have occurred through serial passage in a laboratory?”

Fauci said: “I do not have an accounting of what the Chinese may have done, and I am fully in favor of any further investigation of what went on in China. However, I will repeat again — the NIH and NIAID categorically has not funded gain-of-function research to be conducted in the Wuhan Institute of Virology.”

But the Republican contended that Fauci does support gain-of-function research in the U.S., claiming that “you’re fooling with Mother Nature here — you’re allowing super viruses to be created.”

“I fully agree that you should investigate where the virus came from, but again, we have not funded gain-of-function research on this virus in the Wuhan Institute of Virology,” Fauci said.

A State Department fact sheet released in mid-January contended Wuhan lab researchers “conducted experiments involving RaTG13, the bat coronavirus identified by the WIV in January 2020 as its closest sample to SARS-CoV-2 (96.2% similar)” and that the lab “has a published record of conducting ‘gain-of-function’ research to engineer chimeric viruses.” The fact sheet added that the lab “has engaged in classified research, including laboratory animal experiments, on behalf of the Chinese military.”

NIH told the Washington Examiner earlier this year that the Wuhan lab is not an NIH grantee but that EcoHealth Alliance received NIH grants then provided a sub-award to the Wuhan lab.

“The National Institute of Allergy and Infectious Diseases determined the research in the grant was not gain-of-function research because it did not involve the enhancement of the pathogenicity or transmissibility of the viruses studied,” NIH said.