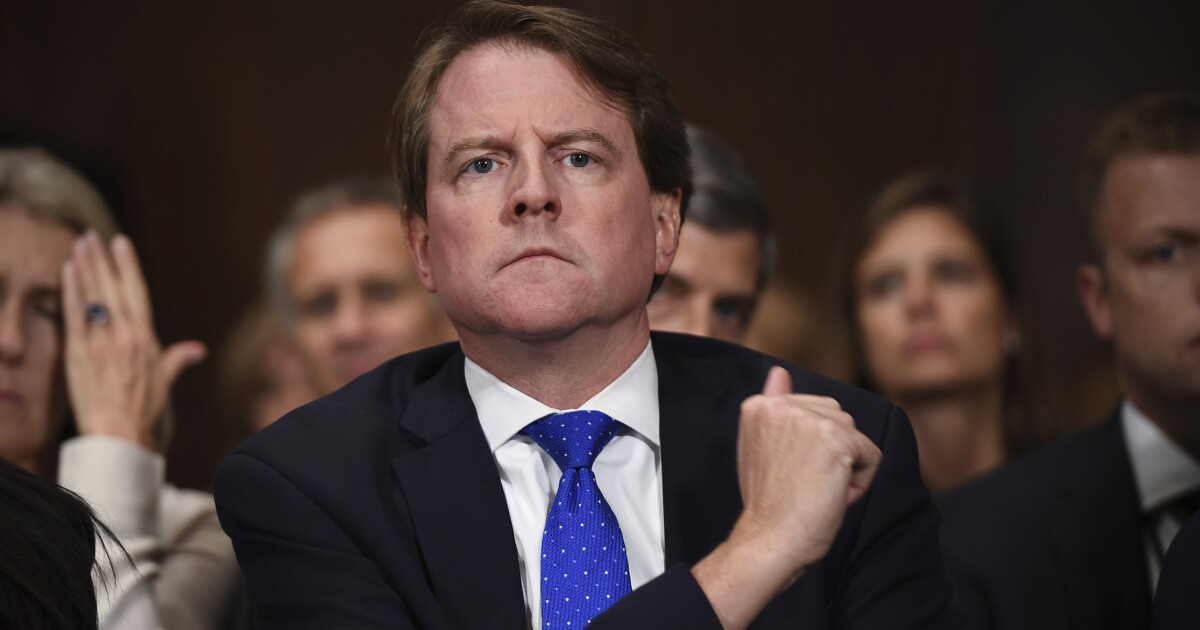 After a nearly two-year battle, the Justice Department and Democratic-controlled House Judiciary Committee appear to have reached an agreement on a subpoena for testimony from former Trump White House counsel Don McGahn in a lingering controversy tied to special counsel Robert Mueller’s Russia investigation.

A brief joint status report, which was sparse on specifics, was filed on Tuesday in the U.S. Court of Appeals for the District of Columbia Circuit.

“The parties hereby submit this joint status report to advise the Court of the progress of the parties’ discussions,” the filing from DOJ appellate lawyer Courtney Dixon and House Judiciary lawyer Douglas Letter said. “The Committee on the Judiciary and the Executive Branch have reached an agreement in principle on an accommodation and anticipate filing, as soon as possible, a joint motion asking the Court to remove this case from the May 19, 2021 oral argument calendar in order to allow the parties to implement the accommodation.”

The original subpoena, which McGahn and the Trump administration resisted, came before the Ukraine-related impeachment investigation into former President Donald Trump, but Democrats said they still saw testimony from the former White House counsel as essential to the process despite the articles of impeachment centering on events that took place after McGahn left the White House. The Justice Department under Trump fought the testimony in court, but under the Biden administration, the agency spent the first few months of 2021 negotiating with House Democrats.

After President Joe Biden defeated former Trump in the 2020 election, and the Democrats maintained control of the House, Judiciary Committee Chairman Jerry Nadler reissued a subpoena in December and said that his panel still had “a right to and need for” McGahn’s testimony.

Nadler, a New York Democrat, argued, “This Court has already held that the House has Article I authority to obtain information in service of its legislative function,” and he criticized “the Trump Administration’s attempt to hamstring that power.”

Rep. Jim Jordan, who was the top Republican on the committee, blasted Nadler’s decision, saying he was “disappointed that you are continuing to misuse limited Committee resources on your fanatical obsession with attacking President Donald Trump.”

Dixon had sought to delay an oral argument in February, arguing that “since briefing was completed in this case, there has been a change in Administrations” and “the new Administration wishes to explore whether an accommodation might be available with respect to the Committee’s request.” Letter argued at the time that “McGahn’s testimony remains essential to the Committee’s investigation and its consideration of remedial legislation” and “given this history and the already lengthy delays that have prevented the Committee from obtaining McGahn’s testimony, further delay in this case would be inappropriate.”

The appeals court granted a delay into April and then another into May, saying that was the final delay it would allow barring extreme circumstances. The two sides sought an agreement for a few months until reaching one on Tuesday.

The full federal appeals court revived the House Democratic effort in October 2020, extending the legal fight beyond the November presidential election. A now-reversed ruling in August 2020 by a three-judge panel had been a win for the Trump administration because the White House blocked McGahn from testifying by citing “absolute immunity” from congressional subpoenas.

Democrats sued McGahn in August 2019, claiming to need his testimony on Mueller's inquiry, particularly the 10 instances of possible obstruction of justice that Mueller outlined in his report. Then-Attorney General William Barr and then-Deputy Attorney General Rod Rosenstein concluded justice had not been obstructed. In November 2019, U.S. District Judge Ketanji Brown Jackson ruled in favor of the Democrats, although that was quickly appealed.

McGahn, who served as counsel from Trump's inauguration through his resignation in October 2018, is mentioned 71 times in Mueller’s 448-page report. When Mueller's office asked McGahn about allegations that Trump had pressured him to fire the special counsel, “McGahn responded that he would not refute the press accounts because they were accurate in reporting on the President's effort to have the Special Counsel removed,” according to Mueller's report.

Mueller concluded that the Russians interfered “in a sweeping and systematic fashion” during the 2016 presidential election, but he “did not establish” any criminal conspiracy between the Kremlin and the Trump campaign.