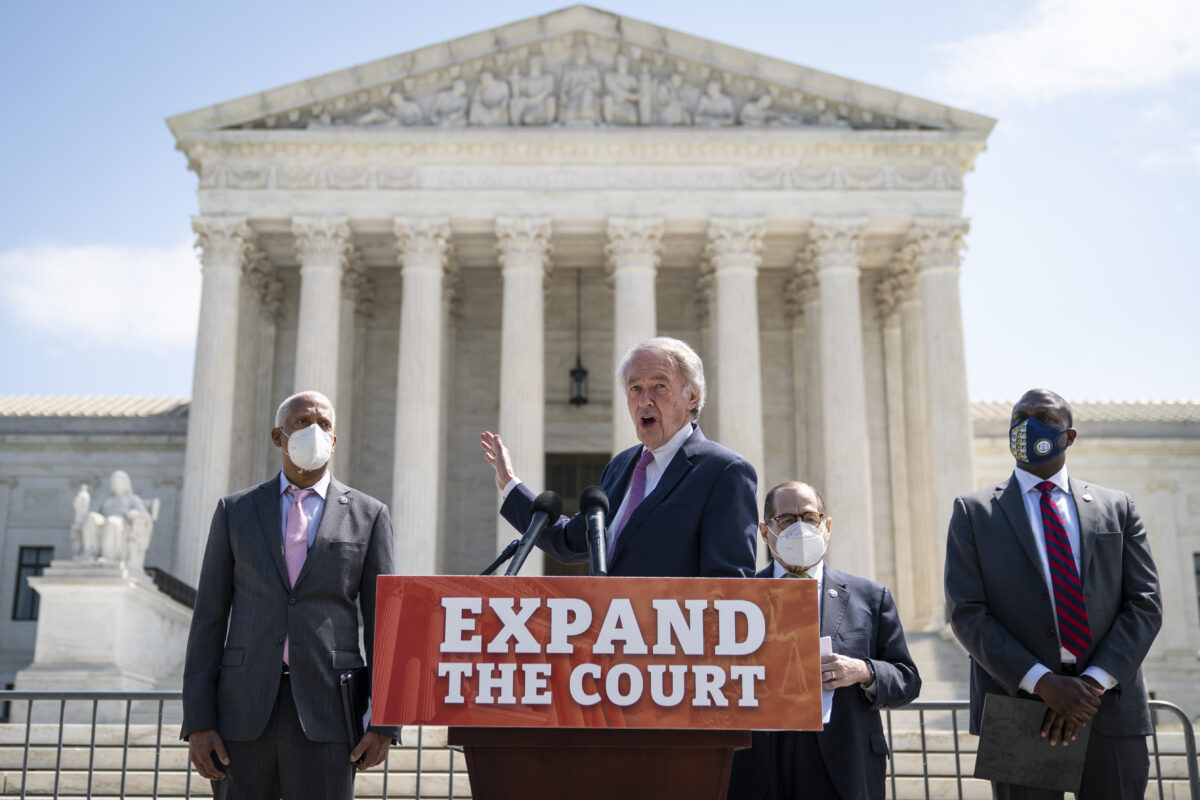 Several Democrat lawmakers have announced a bill to expand the Supreme Court by adding four additional justices, which would “fundamentally compromise and undermine two branches of government,” according to an expert.

“This would be the greatest takeover of the judicial branch by the political branches since America was founded,” said Thomas Jipping, federal judiciary expert at the conservative Heritage Foundation think tank and former counsel to Sen. Orrin Hatch (R-Utah).

He pointed out that to push the bill through the Senate, Democrats would need to abolish the legislative filibuster, which requires 60 votes to pass most bills rather than a simple majority.

“That would be the most radical change in the Senate, as an institution, in more than 200 years,” Jipping told The Epoch Times. “And there is no conceivable argument that that is worth the cost to the liberty that judicial independence makes possible.”

Democrats only hold 50 seats in the Senate with Vice President Kamala Harris available to cast tie-breaking votes. To nix the filibuster, they’d need to reinterpret the Senate rules to say that three fifths of the chamber in fact means 51 of 100, Jipping noted.

Six of the current nine Supreme Court justices have been appointed by Republican Presidents, giving conservatives better chances to challenge laws and regulations coming from the Democrat-held Congress and White House for overstepping the Constitution. Packing the court would give President Joe Biden a chance to appoint justices more sympathetic to his agenda, reversing the situation.

“It is out of balance and it needs to be fixed,” he said, arguing that “too many Americans question the court’s legitimacy” and because of that “the rights of all Americans but especially people of color, women and our immigrant communities are at risk.”

Democrats have criticized how President Donald Trump and congressional Republicans handled nominations to the court in recent years.

In 2016, when President Barack Obama nominated Judge Merrick Garland to the court, the Republican Senate wouldn’t consider the nomination.

Then-Majority Leader Mitch McConnell (R-Ky.) called it the “Biden rule,” referring to Biden’s 1992 comment “that once the political season is underway, and it is, action on a Supreme Court nomination must be put off until after the election campaign is over.” Then-Senator Biden chaired the Judiciary Committee.

Obama was a “lame-duck president” and the electorate sapped his mandate by giving majorities in both the House and the Senate to Republicans in the 2014 midterms, McConnell argued.

To Democrats’ chagrin, McConnell ensured speedy confirmation for Justice Amy Coney Barrett, Trump’s nominee, shortly before the 2020 election. Unlike Obama, Trump was looking toward possible reelection, and his first midterm performance—losing the House, but expanding the Senate majority—was generally better than that of several of his predecessors.

The number of Supreme Court justices has remained the same since 1869. Since its founding in 1789, the number has been increased several times, but always in connection with an expansion of the circuit court system. At the time, two justices would be responsible for one and later two circuit courts. They would need to periodically travel their circuit and personally handle lower court cases. As more states joined the Union, Congress would add more circuits and one more justice for each. By the early 20th century, the “circuit riding” virtually ceased as justices seldom needed to tend to any lower court duties. The additions of the 10th, 11th, Federal, and District of Columbia circuits were no longer accompanied by expansion of the bench.

“There’s literally no argument that it needs more justices,” Jipping said, noting that the court has half the workload now that it had several decades ago.

In 1937, when President Franklin D. Roosevelt pushed for a Supreme Court expansion, fellow Democrats in the Congress resisted, despite holding supermajorities in both chambers.

“They said judicial independence is more important than politics,” Jipping said. “And it still is.”

It’s not clear whether the court-packing bill will get any traction. On April 9, Biden ordered the creation of a commission to study court expansion. He said he’s not ready to say whether he supports or opposes the bill.

The bill has several backers in the House, including Rep. Jerrold Nadler (D-N.Y.), head of the Judiciary Committee. But House Speaker Nancy Pelosi (D-Calif.) said she doesn’t plan to bring the bill to the floor.

“I think it’s an idea that should be considered and I think the president is taking the right approach, to have a commission study such a thing. It’s a big step,” she said.