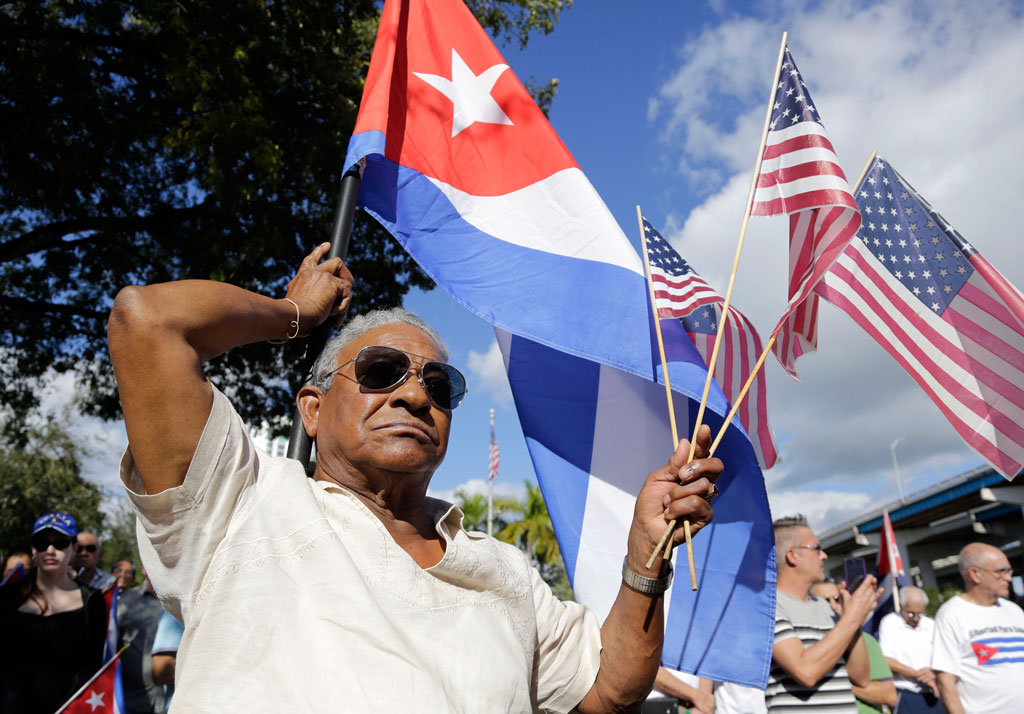 “This is a very emotional subject for me,” Alvarez said. “I was blessed to have parents who understood communism. When my dad saw what was happening in Cuba, he thought that it was going to be temporary.”

Alvarez was one of the people chosen to give a speech at the 2020 Republican National Convention. On March 12, Florida Gov. Ron DeSantis announced the reappointment of Alvarez and local community leader Jorge Gonzalez to the Florida State University Board of Trustees.

As Alvarez explained to The Epoch Times, when his father saw what was happening in Cuba, his brother was sent to Spain in February 1961 to live at the Marist Brothers Catholic School to teach English and mathematics. He was seven years older than Alvarez at the time. In July of 1961, Alvarez was sent to join his brother in Spain. However, when he arrived in Miami on his way to be with his brother, Alvarez learned that his brother had died. So, Alvarez stayed in Miami.

“Since arriving in the United States at the age of 13 as part of Operation Pedro Pan,” DeSantis said in a statement issued to The Epoch Times, Alvarez “has achieved the American Dream here in Florida.”

“His rise from humble beginnings as a child refugee to an entrepreneur in the citrus, retail, and energy industries is a success story that demonstrates how Florida’s liberty-mined, pro-entrepreneurial approach to governance has allowed Floridians to thrive,” DeSantis said. “Unfortunately, many prominent members of today’s Democrat Party advocate for and seek to implement the same confiscatory, socialist policies that have led to such devastation in countries like Cuba and Venezuela and wherever else they have been tried.”

Read More
US Capital Is the Lifeline of the Chinese Communist Party: Roger Robinson Interview
Capitalism: How Capitalists Took the Word From Communists

Alvarez said that while his journey to America may sound dramatic and painful, it “was actually a blessing.”

“It was a blessing that I stayed here. It’s the only country in the world, that we know of, that allows you to reach your potential. It’s where you can prove the things you are capable of doing. It’s where I received a great education.

“I have said before, and I will die saying the same,” Alvarez said, with his voice breaking from emotion, “If I was to give everything that I have today, which is a lot more than I deserve, it would only be one percent of what I was given when I came to this country. There’s nothing like freedom. There’s nothing like the capacity to reach your potential. If we work hard and we are loyal, we will always succeed.

“And the reason why I get emotional, the reason why I literally cry, is because I am afraid that my grandkids may not have the same the luck I had because, all of the sudden, the American people are believing the same misinformation, the same lies, the same promises that the communist people—the same totalitarian people who want equal misery for everybody—sell to their people,” he warned.

DeSantis has vowed to make sure Florida remains “an oasis of freedom,” despite being faced with “a federal administration staffed by many who have voiced support for those policies.”

“It is so important that we work to ensure that the Democrat Party doesn’t get control of Florida’s state government because it would be an absolute tragedy if both Florida and the United States cease to be a beacon of liberty and freedom,” the governor said.

“As a Cuban-American, born and raised in Florida, I have seen perseverance firsthand,” Florida Lt. Governor Jeanette Nuñez told The Epoch Times on Wednesday. In 2018, Nuñez became the first Latina lieutenant governor of Florida.

“From my parents hard-fought battle to achieve a better life for our family to Cuban political prisoners who endured the unthinkable, our united desire to succeed will never waver. The fabric of our nation is woven by individuals with the strong values of faith, family, and freedom. The invaluable contributions of Cuban-Americans are the essence of the American Dream.

Another Cuban-American Florida Sen. Marco Rubio told The Epoch Times, “As someone blessed to have been born in America, I know how limited my opportunities would have been had my parents not left Cuba.

“When those fleeing the island’s communist regime come to our nation, they have the ability to pursue their God-given potential and make a good life for themselves and their families—something impossible to achieve in Cuba unless you are an ally of the military or the dictatorship,” he said. “As Floridians, we’re especially grateful for the many contributions Cuban-Americans make to our state.”

Dr. Jaime Suchlicki, director of the Cuban Studies Institute and author of the Cuban Transition Project, told The Epoch Times in a separate interview on Tuesday that she didn’t know if America was moving toward communism but it is “moving toward a different society, like collectivism.”

“I think it will be a pity for this country to move in that direction,” he said of the shift toward socialist policies in the United States. “We have seen what happened in Eastern Europe. We’ve seen what happened in Cuba and in Venezuela. I mean, private property is the engine of change. And private enterprise is what brings about new ideas, new inventions. So, societies that are controlled by the state are by nature unproductive.”

Suchlicki’s migration to America began when his father fled to Cuba to escape the communist regime of Russia. His mother’s family escaped Poland and went to Cuba just before the Holocaust. Suchlicki was born in Cuba in 1939 and fled to America in 1960 to escape the socialism that was destroying his new country.

“There were still flights so it was easy to come out of Cuba,” Suchlicki recalled. “I went to work first selling in grocery stores. Then in a liquor store. I then met my girlfriend, who is American, and she encouraged me to go to school. I went to the University of Miami. Then I went to Texas and got my doctorate there. I became a professor at the University of Miami in 1967. I just retired, 50 years later.”

“Cuban Americans have been very successful in America and in Florida,” Suchlicki added, explaining that the first generation to come to the United States served as the foundation for others to build upon.

“They created a subculture in Miami,” he said. “The first wave of Cubans were the middle class and business classes. Cuba had a very large middle class and very large entrepreneurial classes, so they were able to do well in Miami. They speak Spanish. They go to the grocery store and buy in Spanish. They go to the movies and watch Cuban movies. They opened businesses. Generally, these Cubans did well in America. There were poor Cubans in Miami. Not all Cubans did well. But in general, as a group, they did better than other groups that came to the United States.”

“If people are not well versed, if they don’t have the proper values and they listen to their teachers and professors, they are liable to believe ‘the lie.’ And by the time they realize what has happened to them, it’s too late, and that is happening in our country as we speak.”