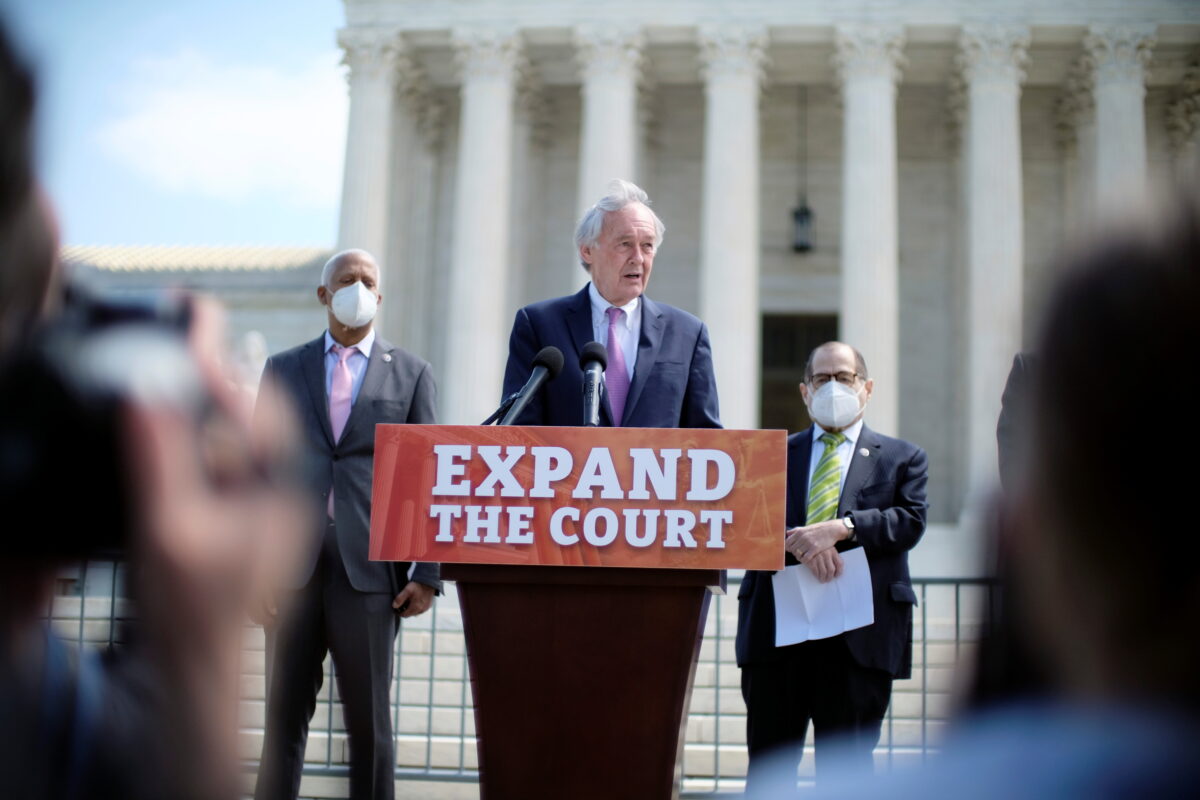 Efforts by House Democrats to expand the number of seats on the Supreme Court have been met by intense opposition by conservatives and moderates.

House Democrats on Thursday ramped up their lobbying efforts to “pack the court” following their unsuccessful attempts last year to stop then-Judge Amy Coney Barrett’s nomination from going through by introducing a bill to expand the court from nine to 13 justices.

Republicans and conservatives are now fiercely condemning what they claim to be an attempt to undermine the integrity and people’s trust in the U.S. Supreme Court. On the same day that the Democrats bill was unveiled, Rep. Andy Biggs (R-Ariz.), chair of the conservative House Freedom Caucus, launched a Republican effort to keep the number of seats in the nation’s top court at nine through a constitutional amendment.

He said that the Democrat’s attempts to expand the court stems from their hunger for power and an attempt to concentrate it in Washington D.C.

“So why do they want four new justices? Well, because six of justices were appointed by Republicans. They’ve got three,” he said of the current court. “That means they’ve got four for Biden, they’ll have 7-6. They want to take power. This is what all of this is about.”

While any attempt by Biggs or others to change the Constitution are doomed to fail in the current Congress given that both chambers are currently Democrat controlled, the proposal represents the beginning of conservative efforts to push back on the Democrats’ new round of attempts to change the court.

Many prominent conservatives have assailed the court-packing proposal, with conservative advocacy groups vowing that they will fight back against the push to liberalize the court.

The Judicial Crisis Network (JCN) announced that it had launched a new campaign to oppose the Democrat bill, which would include a three-week $1 million dollar ad buy.

“For decades, Joe Biden stood firmly against court-packing. But now, the left-wing dark money groups who elected him and Senate Democrats are demanding it, and Biden is changing his tune,” JCN’s President Carrie Severino said in a statement.

Republican lawmakers who have weighed in on the issue have characterized the proposal as a radical and dangerous move.

“Just the latest attempt by the Dems to change the rules rather than convince the American people to buy into their vision. Can’t clear the 60 vote threshold in the Senate? Make it 50. Down 3 seats on the Supreme Court? Expand the court by 4,” Rep. Mike Johnson (R-La.) said in a statement.

“Imagine if we reduced the number from nine to five and just kept the Republicans. You guys would go crazy,” Rep. Jim Jordan (R-Ohio) told the Washington Times.

“Packing the court is an act of arrogant lawlessness. Those behind this effort spit in the face of judicial independence,” Sen. Mike Lee (R-Utah) said.

Although some Democrats have been vocal about packing the Supreme Court, others have yet to completely back the idea, including House Speaker Nancy Pelosi (D-Calif.).

“I have no plans to bring it to the floor,” House Speaker Nancy Pelosi (D-Calif.) told reporters in Washington. Instead, she said she supports President Joe Biden’s commission to study possible reforms to the court.

“I don’t know that that’s a good idea or a bad idea. I think it’s an idea that should be considered, and I think the president’s taking the right approach to have the commission to study such a thing,” she said.

Other members have also expressed caution about supporting the bill.

“I just heard about it. I’m not ready to sign on yet. I think this commission of Biden is the right move,” Sen. Dick Durbin (D-Ill.), the Senate majority whip, said.

Sen. Joe Manchin (D-W.Va.), one of the most moderate Senate Democrats, said separately Thursday that he opposes expanding the court.

Earlier this month, President Joe Biden signed an executive order to form a commission to study possible reforms to the nation’s top court, including proposals to expand the court. He presented the idea of the commission as an alternative to “court-packing” efforts.

Court-packing has been attempted many times since 1937, when Democrat President Franklin D. Roosevelt proposed legislation to expand the size of the Supreme Court to a maximum of 15 justices. But it has yet to succeed. Roosevelt’s motive at the time was to shift the ideological balance of the court so that it would stop striking down his “New Deal” programs.

While the Supreme Court and federal judiciary are set up according to the Constitution, it also gives Congress the authority to pass laws to set up the judicial branch, including how many justices sit in the top court.