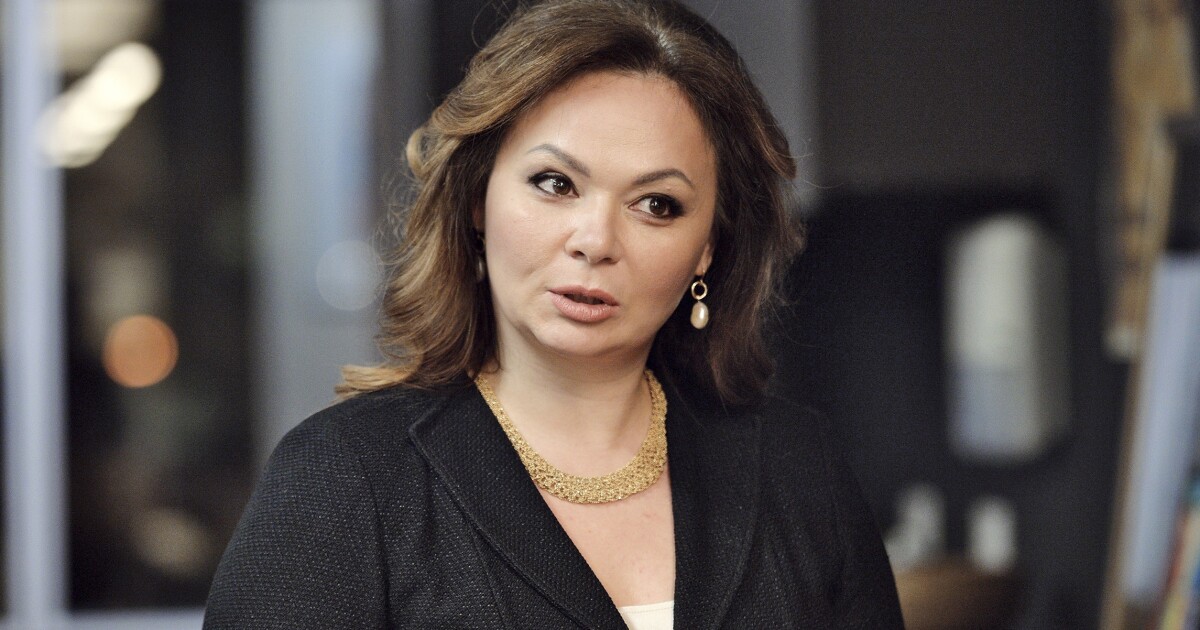 A new book casts a spotlight on Fusion GPS’s work for a Russian intelligence-linked lawyer while the firm hired a British ex-spy to author his now-notorious dossier in 2016.

Spooked: The Trump Dossier, Black Cube, and the Rise of Private Spies was written by Barry Meier, a former New York Times reporter. The book details the connections between former MI6 officer Christopher Steele, then-Hillary Clinton campaign-funded Fusion, and Russian lawyer Natalia Veselnitskaya, whom the Senate Intelligence Committee concluded was connected to Russian intelligence as she sought to undermine the Magnitsky Act and whom the Justice Department accused of obstructing justice in a case in which she was assisted by Fusion founder Glenn Simpson.

Veselnitskaya, a former prosecutor with ties to the Kremlin who would gain infamy for her role in the June 2016 Trump Tower meeting, hired BakerHostetler to help Cyprus-based, Russian-steered Prevezon Holdings in court, and the law firm hired Fusion in 2014. Businessman Bill Browder had alleged Fusion acted as an agent for Russian interests when Vladimir Putin tried to combat the Magnitsky Act and its sanctions on Russian officials.

The new book contends Fusion “made a fortune off the Prevezon case” and that records showed “the firm billed BakerHostetler some $530,000 in fees and expenses during the first six months of 2016 alone — a period that represented just a fraction of the time it worked on the real estate firm’s behalf.”

Browder, head of Hermitage Capital, championed the Magnitsky Act, which was named for his tax lawyer corruption whistleblower Sergei Magnitsky, who died in a Russian prison in 2009 after his investigation allegedly uncovered hundreds of millions of dollars of tax fraud implicating Russian officials.

Meier noted Simpson’s “obsessive pursuit” of Browder on behalf of Veselnitskaya “may have blinded him to something else — that in working on behalf of Prevezon he had been drawn into what Senate investigators would later describe as a Kremlin-sanctioned influence operation to undercut the Magnitsky Act” and that “Vladimir Putin had been gunning for Bill Browder’s head.”

Putin despises the Magnitsky Act and retaliated against its passage by banning American adoptions of Russian children.

The book says Simpson was called by BakerHostetler, which had been hired by Veselnitskya, who was “overseeing a legal and public relations campaign against” Browder. Meier wrote Veselnitskaya “told a very different tale” than Browder, and it was “one that Glenn Simpson would amplify in coming years on behalf of Prevezon and its owner.” Meier wrote Veselnitskaya cast doubt on how Magnitsky died and claimed “Browder’s charges against Prevezon … were fake.”

The case lasted years, and Meier wrote Simpson “would assist Prevezon both inside and outside the courtroom, often by digging up documents or disparaging Browder” and helped to “physically track down” the businessman. Simpson also “tried to plant negative articles about” Browder but “didn’t have much success.” He also “worked alongside Rinat Akhmetshin” — who was also accused by the Senate Intelligence Committee of ties to Russian intelligence — “to publicize a documentary that depicted Browder as a fraud.”

Then-Manhattan U.S. Attorney Preet Bharara said the DOJ had uncovered “a Russian criminal enterprise sought to launder some of its billions in ill-gotten rubles through the purchase of pricey Manhattan real estate.” The DOJ unsealed an indictment against Veselnitskaya, now out of reach in Russia, alleging she’d obstructed justice during the Prevezon case by concealing the fact the alleged independent investigative findings in a Russian Mutual Legal Assistant Treaty request-response had actually been drafted “in secret cooperation with a senior Russian prosecutor.”

Meier said Simpson was “swarmed” at a 2017 Aspen conference by reporters looking to score an interview, but ABC News producer Rhonda Schwartz said, “In order to get Glenn, you first had to do a hit piece on Browder.”

Meier also wrote about a 2019 dinner interview in Moscow he had with Veselnitskaya, saying, “She said that U.S. prosecutors had come after her because she humiliated them by forcing a settlement of the Prevezon case for far less than they had wanted.”

Veselnitskaya “said she still had warm feelings for Glenn Simpson and considered him a talented investigator who had dug up critical information for Prevezon,” but “as for Christopher Steele, she had nothing but contempt for him and considered the dossier a farce.”

Veselnitskaya also pointed out the Steele dossier made no mention of the Trump Tower meeting, and she told Meier her campaign against Browder continued.

The Senate Intelligence Committee’s August 2020 report was unsparing in its assessment of Veselnitskaya.

“The information that Natalia Veselnitskaya, the Russian lawyer, offered during the June 9, 2016 meeting and planned to offer again at the follow up meeting requested by Aras Agalarov was part of a broader influence operation targeting the United States that was coordinated, at least in part, with elements of the Russian government. That Russian effort was focused on U.S. sanctions against Russia under the Magnitsky Act. … The Committee found no evidence that the meeting participants from the Campaign were aware of this Russian influence operation when accepting the meeting or participating in it.”

The Senate Intelligence Committee assessed Veselnitskaya and Akhmetshin both “have significant connections to the Russian government, including the Russian intelligence services” and “the connections the Committee uncovered, particularly regarding Veselnitskaya, were far more extensive and concerning than what had been publicly known.” The senators concluded the June 2016 Trump Tower meeting “was part of a larger Russian government-supported effort to counter U.S. sanctions.”

The Senate report said Veselnitskaya “has described herself as a source of information or ‘informant’ for the Russian government.” The senators said Veselnitskaya has “close ties” to Yuri Chaika, who until 2020 was Russia’s prosecutor general and a member of President Putin's Security Council. Senators have also noted Chaika “likely has been involved in Russian influence activities.”

The Senate report noted they “found no evidence that Veselnitskaya used her ties with Fusion GPS to influence the contents of the dossier,” but the senators nevertheless “sought to understand the significance of Veselnitskaya's relationship with Simpson because of the timing of their interactions, and because Veselnitskaya and Simpson both appear as key players in other events related to the 2016 election.”

The report said, “Although Simpson told the Committee he was unaware Veselnitskaya planned to meet with Trump Campaign staff and family members in June 2016, he had supplied at least some of the research she presented to the June 9, 2016, meeting-the purported ‘dirt’ on Hillary Clinton's donors.”

Veselnitskaya told the Senate, “The first person who ever told us about the involvement or existence of Ziff Brothers was Mr. Glenn Simpson. … I have his reports in the number of hundreds of pages.”

Browder said he believes Fusion's work violated the Foreign Agents Registration Act. He sent a complaint to the Department of Justice in 2016, and then-Senate Judiciary Committee Chairman Chuck Grassley urged the department to look into it in 2017.

Special counsel Robert Mueller’s report detailed the June 2016 meeting involving Donald Trump Jr., campaign chairman Paul Manafort, Trump son-in-law Jared Kushner, and various Russians including Veselnitskaya. The meeting was pitched to Donald Trump's campaign as an opportunity to get damaging information on Clinton, but Veselnitskaya pulled a bait-and-switch and turned it into a presentation on Russia’s desire to repeal the Magnitsky Act.

In his Senate testimony, Simpson admitted to researching many of the allegations that appeared in Veselnitskaya's talking points. The Russians complained about U.S. sanctions and mentioned Russian adoption, which the Trump associates considered a waste of time.

Browder contended Fusion created a dossier against him by using “false information.” Veselnitskaya’s dossier contained claims related to Browder and was designed to convince the U.S. to repeal the Magnitsky Act.

Simpson denied any foreknowledge of the Trump Tower meeting despite seeing Veselnitskaya the day before, the day of, and the day after. He told the Senate he hadn’t been concerned about who Veselnitskaya was or what she did with the information he dug up for her.

Steele put his discredited dossier together at the behest of Fusion GPS, funded by Clinton's presidential campaign and the Democratic National Committee through the Perkins Coie law firm.