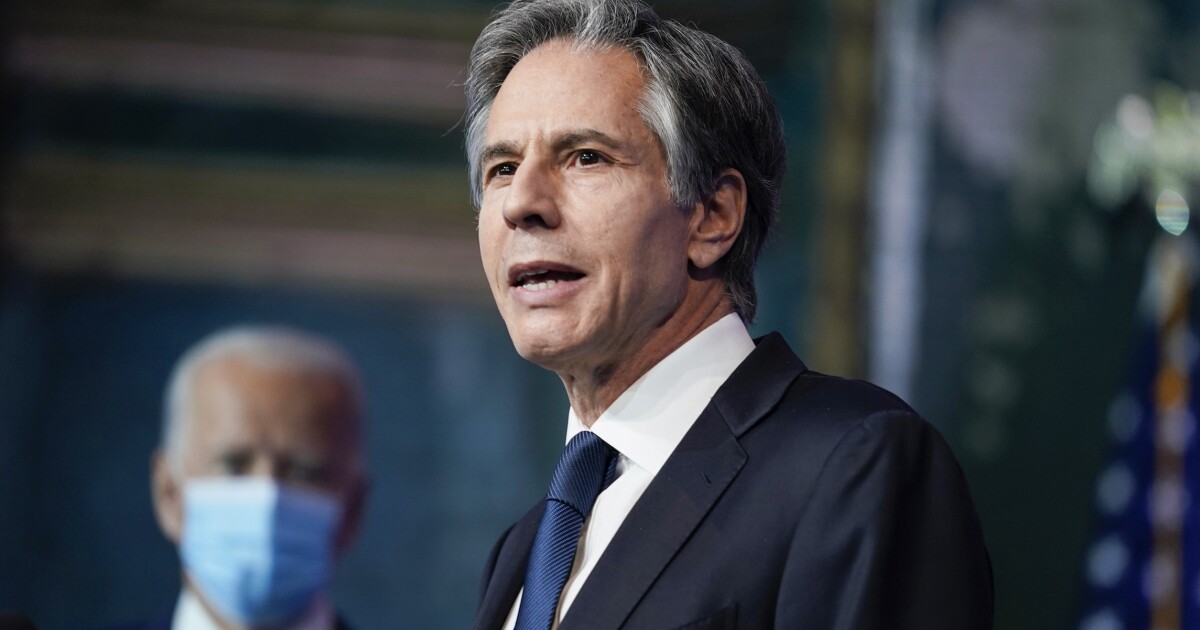 Blinken appeared on Meet the Press on Sunday, where host Chuck Todd asked if Blinken thought China knew how the novel coronavirus truly originated and whether China is withholding that from the world.

“As we’re dealing with COVID-19, we also have to put in place a stronger global health security system to make sure that this doesn’t happen again, or if it does happens again, we’re able to mitigate it, and that means making a real commitment to transparency, to information sharing, to access for experts. It means strengthening the World Health Organization and reforming it so it can do that, and China has to play a part in that,” he added.

Officials from the Trump and Biden administrations have said the Chinese government worked for over a year to thwart an independent investigation into the origins of the virus, which has killed 2.93 million people worldwide, according to Johns Hopkins University. Both administrations cast doubt on the joint World Health Organization- China origins study released in March.

When Blinken was asked if he would guarantee the United States would determine how COVID-19 started, he replied, “I think we have to, because we need to do that precisely so we fully understand what happened in order to have the best shot possible at preventing it from happening again.”

On March 30, WHO Director-General Tedros Adhanom Ghebreyesus said the Chinese government should have provided more complete data and said the WHO-China team had not fully investigated the potential of COVID-19 originating through an accidental leak from a Wuhan lab, a hypothesis he insisted still needed further study despite being dubbed “extremely unlikely” by the WHO-China team.

Trump spy chief John Ratcliffe said that “for the past year I didn’t see a single intelligence product from the best intelligence enterprise in the world that was consistent with what the World Health Organization said about the likely origins of COVID-19” during an appearance on Sunday Morning Futures on Fox News.

Ratcliffe pointed to a Trump State Department fact sheet on the Wuhan Institute of Virology declassified in mid-January which assessed that lab workers had fallen ill with COVID-19-like symptoms before the wider Wuhan outbreak in 2019 and that the Wuhan lab had conducted secret experiments with the Chinese military and gain-of-function research.

“All of those things are real clear about China’s role with respect to a virus that was a direct and proximate cause of half a million American deaths,” Ratcliffe said, adding, “And the fact that Joe Biden is not or his diplomats are not addressing this issue directly with China I think really reflects that everything that they’ve said about China, about being tough, it’s just that — it’s rhetoric.”

President Joe Biden and Chinese President Xi Jinping spoke by phone on Feb. 10 and exchanged views on “countering the COVID-19 pandemic,” according to a White House read out.

Last week, Biden was asked if he had spoken with Xi about China misleading the world on COVID-19.

“No, I have not had that conversation with President Xi,” he said.

The State Department, though, recently issued a rare rebuke of China‘s continued efforts to push baseless claims about COVID-19 originating with the U.S. military.

“The United States condemns the PRC’s false, baseless, and unscientific claims which undermine the spirit and purpose of an impartial origins investigation,” a State Department spokesperson told the Washington Examiner, adding that “we cannot know the origins of the virus and its spread until the PRC provides a full accounting of the actions it took and full transparency of the knowledge it had in the early days of the COVID-19 outbreak.”