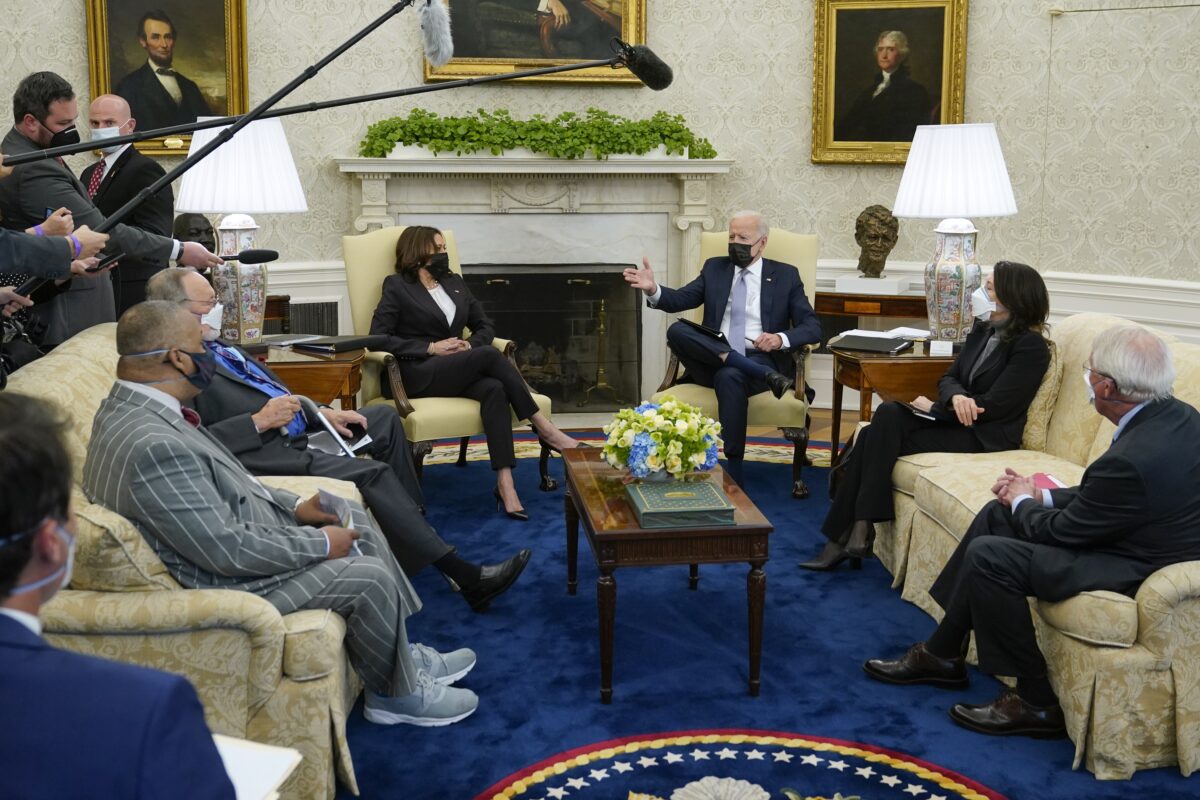 Doubts still linger about size of plan, which includes $400 billion for the care of the elderly and disabled

A meeting on Monday led by President Joe Biden that featured legislators from both sides of the aisle received positive reviews from Republicans and Democrats as Congress tries to hammer out a major infrastructure package that could end up north of $2 trillion.

“It was a good discussion,” Sen. Roger Wicker (R-Miss.) told reporters afterwards. “We had a very lively discussion with four senators and four representatives, it wasn’t contentious at all. It was not at all. The president was highly engaged, did most of the talking, or did a lot of the talking, but I do think he listened, and the vice president was there the entire time.”

During the one hour 40-minute confab at the White House, Biden told attendees, “I’m prepared to negotiate as to the extent of my infrastructure project, as well as how we pay for it.”

“Those are all the exact words that I wanted to hear going into the meeting,” Rep. Garret Graves (R-La.), a member of the Transportation and Infrastructure Committee, said. “And so that was really encouraging.”

Still, doubt lingers among the GOP after attempts to reach a compromise on a COVID-19 relief package failed last month, ending with Democrats ramming through a $1.9 trillion bill that included what critics described as bailouts for state and local governments.

Asked if the White House heard the message, she said, “I think so.”

Major sticking points so far include the Biden administration’s inclusion of $400 billion for the care of the elderly and disabled, and its desire to raise the corporate tax rate to 28 percent.

“Clearly there are parts of his program that are non-starters for Republicans,” Wicker said.

The senator views the 2017 tax bill, which slashed the corporate tax rate from 35 percent to 21 percent, as one of his “signature achievements” and sees any proposal with the increase as “an almost impossible sell” to Republicans.

“And I did tell him that. Well, he disagrees. But he talks about those 58 corporations that didn’t pay any taxes, not a penny of taxes he says, you’ve heard it over and over. I’m willing to sit down with him and let’s find those 58 guys, and make sure they pay some taxes. But what he’s proposing would be a major burden on job-creating small businesses,” Wicker said.

Cedric Richmond, the White House director of public engagement, said the tax bill, which was signed by former President Donald Trump, cut corporate taxes lower than any business asked for.

“Not one business in six years ever mentioned 21 percent,” Richmond said. “What I’m reminding them of is we would be bringing the rate back to the neighborhood they wanted in the first place. And at the same time, we could fix infrastructure.”

Before the meeting, Biden said that “everyone acknowledges we need significant increase in infrastructure” and that negotiations would come down to what is defined as infrastructure.

“So that’s what we’re going to talk about, and I’m confident everything is going to work out perfectly,” he said.

The White House later sent a readout that said Biden and Vice President Kamala Harris “shared their vision in the American Jobs Plan to create millions of good jobs, rebuild our country’s infrastructure, and position the United States to out-compete China.”

Biden and members of Congress “had a good exchange of ideas,” with the president asking for members’ “feedback and follow-up on proposals discussed in the meeting, while underscoring that inaction is not an option,” the White House added.

There are plans to continue engaging with members of Congress, as well as key stakeholders, throughout the rest of the month.

Biden “made a compelling case” for his package, Sen. Alex Padilla (D-Calif.), another attendee, told reporters after the Oval Office confab.

“I think his main point was, like, we’re not going to go small. We’re going to get this right,” added Sen. Maria Cantwell (D-Wash.), who also attended.

Padilla asked for an emphasis on housing, noting that protection against evictions are set to expire soon and California is grappling with an “affordability crisis.”

Cantwell said she raised issues such as transportation and keeping the United States competitive.

“You don’t use the president of the United States’ time multiple times over, including two infrastructure meetings, if he did not want to authentically hear from the members attending about their ideas about how to move forward this package in a bipartisan manner,” she said.

Democrats have plenty of motivation to narrow the bill to draw Republican support, with a slim three-vote margin in the House of Representatives and a divided 50-50 Senate in which they hold a majority only through Harris’s ability to cast tiebreaking votes.

Still, Democrats in the Senate are considering turning again to budget reconciliation, which lowers the number of votes needed in the upper chamber by 10 to 50, along with the tiebreaker.

That effort would be complicated by Sen. Joe Manchin’s (D-W.Va.) opposition to the corporate tax rate hike. Manchin prefers to raise the rate no higher than four percent.

House Speaker Nancy Pelosi (D-Calif.) has said she wants to pass an infrastructure bill by July 4.