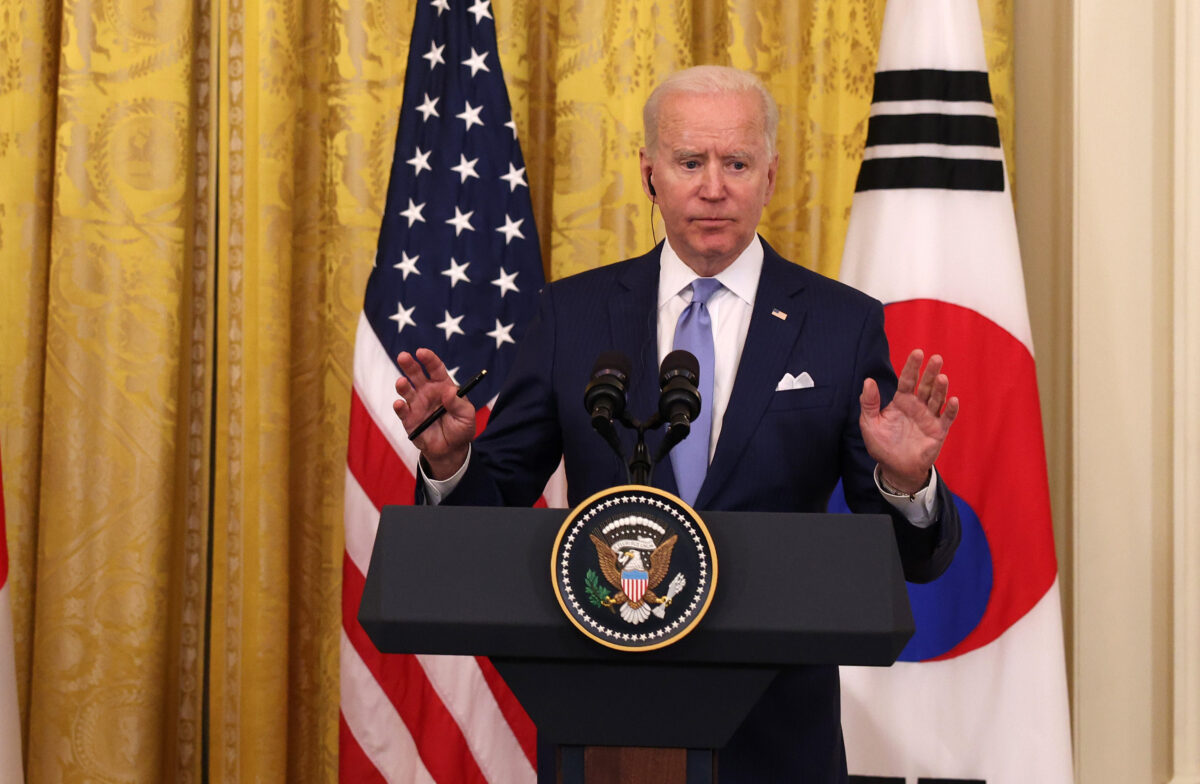 President Joe Biden on Friday redirected a question about UFOs back to former President Barack Obama, who had recently acknowledged that military footage of aerial phenomena is unexplainable.

“I would ask him again,” Biden said during a press conference with South Korean President Moon Jae-in.

Obama told a late-night host earlier this week, that some of the phenomena captured in military videos cannot be explained.

“What is true, and I’m actually being serious here, is that there is footage and records of objects in the skies that we don’t know exactly what they are,” Obama said. “We can’t explain how they move, their trajectory.”

“They did not have an easily explainable pattern. And so I think that people still take seriously trying to investigate and figure out what that is.”

The Pentagon confirmed last week that certain images and footage of Unidentified Aerial Phenomena (UAP) released to the public last month were taken by U.S. Navy personnel, and are currently under investigation by its UAP Task Force.

The acknowledgment follows the release of footage by documentary filmmaker Jeremy Corbell, who shared media on YouTube, writing that the U.S. Navy “photographed and filmed pyramid-shaped UFOs and spherical advanced transmedium vehicles.”

In one clip, footage of what the Pentagon calls a “transmedium vehicle” appears to hover from side to side, before dipping below sea level.

“This footage was filmed in the CIC (Combat Information Center) of the USS Omaha on July 15th 2019 in a warning area off San Diego,” Corbell wrote. “This footage depicts a UAP event series that reached a crescendo with one of the unknown targets entering the water. No wreckage found. None of the unknown craft were recovered.”

Confirming the authenticity of the clip, Susan Gough, a Pentagon spokesperson, told the Daily Caller that it was captured by U.S. Navy personnel.

“I can confirm that the video was taken by Navy personnel, and that the UAPTF included it in their ongoing examinations.”

Corbell said intelligence reports note that the “spherical” craft could not be found upon entry to the water, and that a submarine was used in the search but nothing was recovered.

The Pentagon’s UAP Task Force, which was established last year, is scheduled to release a report on its findings in June.

“The mission of the task force is to detect, analyze, and catalog UAPs that could potentially pose a threat to U.S. national security,” it said.

Last month, Gough also confirmed night-vision footage uploaded by Corbell showing a “pyramid-shaped” flying object moving at a constant speed and blinking irregularly. That footage is also under review by the UAP Task Force, she said, declining to elaborate further for security reasons.

Since the release of the U.S. Navy images and footage, the Pentagon’s inspector general said it plans to begin a probe next month into how the Pentagon has responded to unidentified aerial phenomena, including UFOs.

John Ratcliffe, the former director of National Intelligence, said UAP Task Force’s report would detail more information than has been released before.

“There are a lot more sightings than have been made public,” he said on Fox News in March.

Zachary Stieber and Isabel Van Brugen contributed to this report.