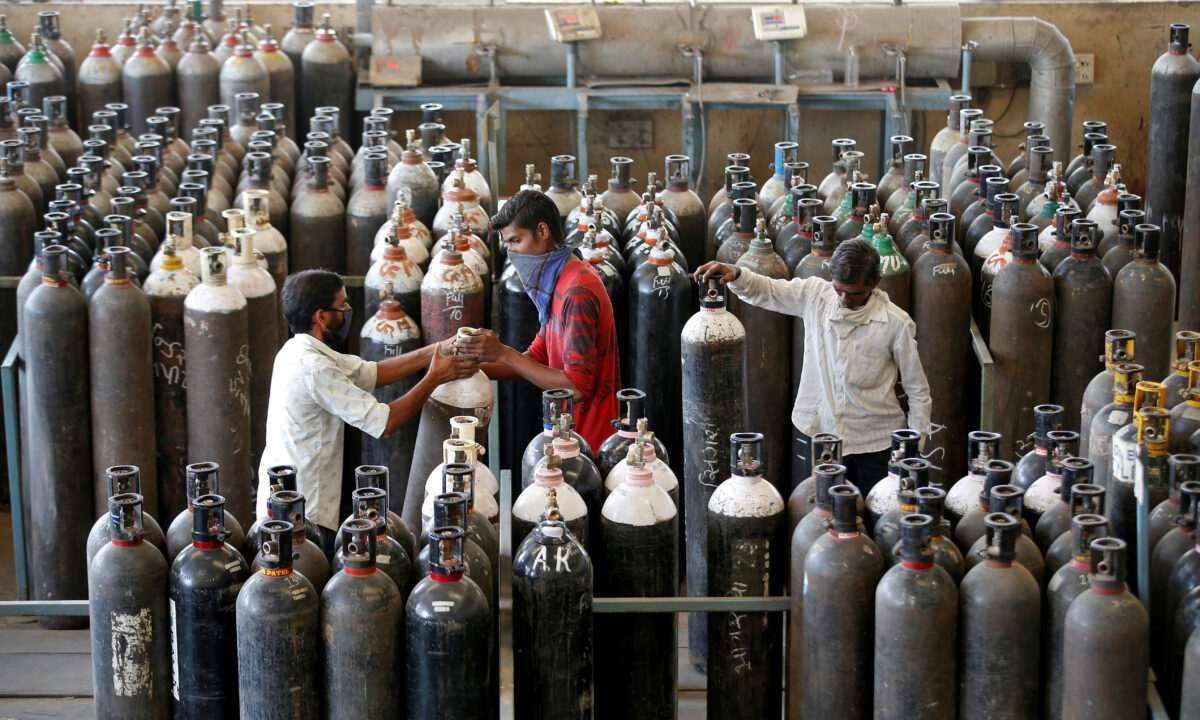 Critics say the help has been slow in coming.

Over the past five days, India has set a world record for a single-day increase in coronavirus cases, with more than 300,000 new cases each day and a peak of 352,991 new cases on April 26. More than 17 million cases have been recorded since the pandemic began.

“India is facing a huge surge right now, and there’s a lot of support that we’re currently exploring and what we’re providing that will be helpful on the ground immediately,” White House senior administration officials said on a press call on April 26.

“At India’s request, we’re exploring options to provide oxygen and related supplies.  These are resources that India has specifically requested and are very high on their priority list.”

On the same day as the press call, President Joe Biden spoke with Indian Prime Minister Narendra Modi, and the leaders agreed to work “closely together” to fight the pandemic and protect their “citizens and the health” of their communities.

“Just as India sent assistance to the United States as our hospitals were strained early in the pandemic, we are determined to help India in its time of need,” the president earlier said in a message on Twitter on April 26.

National security adviser Jake Sullivan also spoke with his Indian counterpart, Ajit Doval, about the long-standing U.S.–India partnership in fighting battles against “smallpox, polio, and HIV.” Sullivan told Doval that the United States will deploy a team of public health advisors from the Centers for Disease Control and Prevention and the U.S. Agency for International Development (USAID) to work with the U.S. Embassy, Indian health ministers, and India’s epidemic intelligence staff.

“The United States has identified sources of specific raw material urgently required for Indian manufacture of the Covishield vaccine that will immediately be made available for India,” Emily Horne, spokesperson for the National Security Council, said in a statement.

The Biden administration’s decision to provide assistance to India is “certainly a welcome decision” and is a “precious, comprehensive assistance package,” but it should have come sooner, Michael Kugelman, the deputy director and the senior associate for South Asia at the Washington-based Wilson Center, told The Epoch Times.

He said it’s more of a way to express support and solidarity with Indian people, rather than providing assistance because India and the United States have a “broad-based partnership.”

“The public diplomacy aspect of the U.S. response could have been better. The messaging could have been more immediate. But I think at the end of the day what’s important is that help is on the way,” Kugelman said.

Dr. Harsh Pant, director of studies and head of the strategic studies program at New Delhi-based Observer Research Foundation, also said the U.S. response to this “tragedy” was a bit late.

“I think the optics of the complete silence on the part of America for the past few days has been visibly noted in India, and I think there’s a sense of outrage in India,” he said.

The press in India noticed the remarks of State Department spokesperson Ned Price at an April 22 press briefing. While responding to a question about supporting India during its recent crisis, Price said the United States had a “special responsibility” to first take care of its own citizens.

A few days later, the message from Sullivan to Doval was of a more supportive nature.

Earlier this month, the U.S. Navy’s 7th Fleet carried out a “freedom of navigation” operation through India’s special economic zone area near the Lakshadweep Islands in the Arabian Sea, without seeking India’s prior consent. While the U.S. administration later said it was an innocent move, Pant says there are people in India who are “connecting various dots,” and that’s led to some negativity among Indians against the Biden administration.

The senior White House officials told reporters that the Department of Defense and USAID are seeking options to provide oxygen generation systems, and the State Department is currently working to arrange for oxygen, including cylinders, for India.

“And I’ll stress that some of these elements are in the exploration phase; they’re shorter- and longer-term options that we’re providing in the immediate, and then we plan to continue to be engaged over the longer term,” the officials said.

The U.S. administration is also exploring the availability of oxygen concentrators and ventilators and is working with India to ensure the U.S. equipment is compatible with Indian devices and that necessary training will be provided.