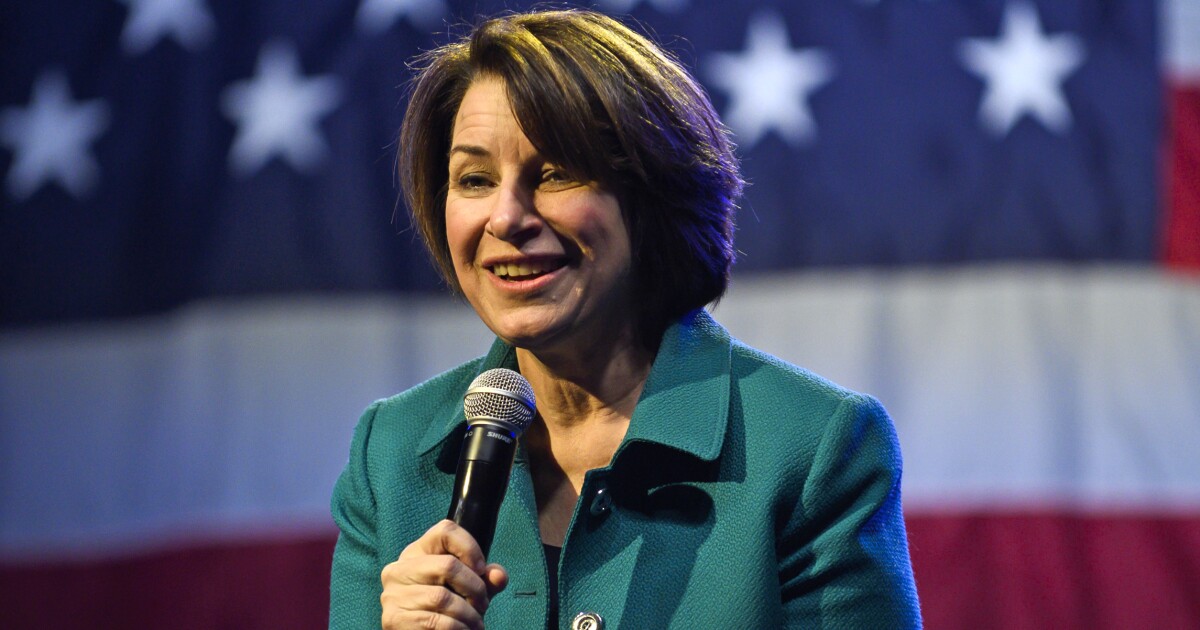 If you are not from her home state of Minnesota, your first inkling that Sen. Amy Klobuchar is a serious lawmaker may have come during Brett Kavanaugh’s confirmation hearings in 2018. The hearings were a circus. Sen. Sheldon Whitehouse spun conspiracy theories about dark money. Sen. Patrick Leahy demanded to know who hacked his email in 2001. Protesters in Halloween costumes howled from the gallery. But Klobuchar asked Kavanaugh to defend two antitrust rulings he had made as a judge on the U.S. Court of Appeals for the District of Columbia Circuit.

Three years later, she expands on the topic that has been a significant focus of hers since she was elected to the Senate in 2006. Antitrust: Taking on Monopoly Power from the Gilded Age to the Digital Age is a tour of the history of the battle between monopolies and government that shows the onetime presidential candidate’s deep knowledge of a subject that has recently reemerged into the legal and political mainstream. Following on Tim Wu’s 2018 The Curse of Bigness and Matthew Stoller’s 2019 Goliath, Klobuchar’s work is the latest to examine the growing size, concentration, and power of businesses and what it means for the American people.

At the same time, Klobuchar may have learned the wrong lesson from the Kavanaugh hearings. While the show horses got all the media attention (one of them ended up vice president), Klobuchar and other workhorses labored in the shadows. That is fine for a legislator who wants to do her job well, but it does not lead to higher office. Perhaps this is why she sprinkles her otherwise sober account with partisan slants and hot-button miscellanea that detract from its overall purpose.

Klobuchar’s history portrays Americans as having been at odds with monopolies since the founding, and she is at least partly correct. The tea that patriots dumped in Boston Harbor in 1773 was aboard ships of the British East India Company, a monopoly. Even Adam Smith, who was sympathetic to the American colonists’ cause, seemingly departed from his laissez-faire orthodoxy to condemn monopolists, comparing them to an “overgrown standing army.”

But the monopolies Smith and the tea partiers hated were not private businesses that had out-competed their rivals and now abused their position. They were monopolies granted by the government. The East India Company was the worst offender, using its monopoly on British trade with China and India to grow as powerful as the state. It was a corrupt and unjust enterprise, but it got that way through the British government, not in spite of it.

The facts are an awkward fit because no purely private enterprise in colonial America approached the power of the crown. Even after independence, the only private corporation that could rival Congress was the First Bank of the United States — again, a company created by the government and granted a legal monopoly on the printing of banknotes.

But Klobuchar is not wrong to place the antitrust cause within the mainstream of U.S. history. It is one facet of the fight between Alexander Hamilton and Thomas Jefferson over the shape of the new nation. Jefferson envisioned an agrarian land of self-sufficient yeoman farmers, while Hamilton wanted to promote the growth of capital and industry to make the nation strong and free.

Hamilton won the initial skirmish, hence the establishment of the national bank, but Jefferson and his ideological descendants regained their lost turf, and then some. The First Bank lost its charter in 1811. A Second Bank of the United States was chartered in 1816, but it ran afoul of small-government Jeffersonians in the person of Andrew Jackson, who killed it permanently in 1836. Until Woodrow Wilson signed the Federal Reserve Act into law in 1913, the country had no central bank.

By then, central banking was seen as a tool against powerful business, not as its ally. And business had indeed grown to the point that it was, in some cases, more powerful than the government. Again, the Hamilton-Jefferson debate shaped the solutions. Klobuchar credits President Theodore Roosevelt as a trustbuster, and he was, but he took the Hamiltonian side in the fight, arguing that to constrain abuses by monopolies, the government needed to become more powerful. (Here Klobuchar includes a jarring aside about the fate of the statute of Roosevelt outside New York’s American Museum of Natural History, which activists in 2020 criticized as racist.)

On the other side of the debate from Roosevelt were Wilson and Supreme Court Justice Louis Brandeis. While also liberal, they differed from Roosevelt and his successor, William Howard Taft, in wanting to keep everything small. Wilson campaigned on breaking up monopolies even more aggressively than Roosevelt and Taft, reasoning that if the companies stayed small and local, so could the government. He was elected in 1912 but did not bring his plans into action. He governed as more of a big-government progressive than Roosevelt and Taft had, dissolving fewer trusts.

Klobuchar’s larger point here is that antitrust was a bipartisan effort, even when there was disagreement as to the details. The Sherman Antitrust Act of 1890 and the Clayton Antitrust Act of 1914 still form the heart of American antitrust law today. But their applications have changed. Klobuchar details the fight between “Chicago school” and “Harvard school” academics that decided the direction of antitrust enforcement. Chicago school theorists, including Judge Robert Bork, most prominently, focus on the harm to consumers and favor allowing mergers when they believe the result will be lower prices or better products. The Harvardites, including Justice Stephen Breyer, focus on the conditions they believe are needed to create healthy competition and are less concerned with economic efficiency.

The law is written vaguely enough to admit both interpretations, but Klobuchar leans toward the Harvard professors and believes that John Sherman, the author of the Sherman Act, would, too. She is likely correct, at least as to Sherman. At the time, the Ohio senator addressed the problem as one of undemocratic domination. “If we will not endure a king as a political power,” she quotes him as saying, “we should not endure a king over the production, transportation, and sale of any of the necessities of life.” Whatever Sherman’s opinion, his law is now interpreted according to the tenets of the Chicago school. As a purely economic matter, the Chicagoans may have the better argument. But all policy is not economic policy, and people are not just consumers.

Modern twists in the antitrust story show the flaw in the current interpretation, Klobuchar explains. The Big Tech giants, frequent antagonists in this book, have reshaped the antitrust debate in that they do not charge their customers anything but profit through the data they collect and the ads they sell.

For instance, Chicago-school antitrust experts would likely have blessed Facebook’s acquisition of the WhatsApp instant messenger service in 2014 — the Obama administration certainly did — which allowed WhatsApp, in 2016, to ditch the nominal fees it charged its users. Consumer welfare was increased. Prices came down. Success! But Facebook’s purchase of WhatsApp, along with Instagram, meant that a single company owned an even larger share of social media services. Consumer prices didn’t increase, but the purchase was blatantly anti-competitive and resulted in further consolidation of Facebook’s power over our information environment.

In Klobuchar’s chapter on solutions, the workhorse reemerges. Many political books will end with a call for judges to overturn rulings or presidents to issue new orders. Klobuchar understands, though, that weaknesses in the law can only truly be fixed by Congress. She lists 25 changes that she thinks will make antitrust law better, many of them bills she has already proposed at some point in her 14 years in the Senate.

Some make a lot of sense. Her Anticompetitive Exclusionary Conduct Prevention Act would establish that anti-competitive behavior is illegal, overruling the Chicago-style emphasis on the results of the behavior to consumers. This, along with other proposals, would clarify the law rather than leaving its interpretation up to the whims of bureaucrats at the Department of Justice. Others are not so good: Her call to allow indirect purchasers to sue for antitrust claims would fill the courts with suits every time anyone thought he or she got ripped off. But taken as a whole, the collection shows something rare in a political book: proposed solutions that might actually come into effect.

Quibbles aside, this book is a cut above the usual work product of officeholders. Klobuchar seemingly could not decide whether to write a bland campaign book or a learned treatise. In Antitrust, we get both at once, and the conglomerate can easily be broken up. Most of the book is a reasoned, if left-leaning, account of the rise of the antitrust movement — a well-researched, extensively cited, and worthwhile read for anyone interested in the topic. The rest should be spun off and forgotten.

Kyle Sammin is a lawyer and writer from Pennsylvania and the co-host of the Conservative Minds podcast. Follow him on Twitter at @KyleSammin.