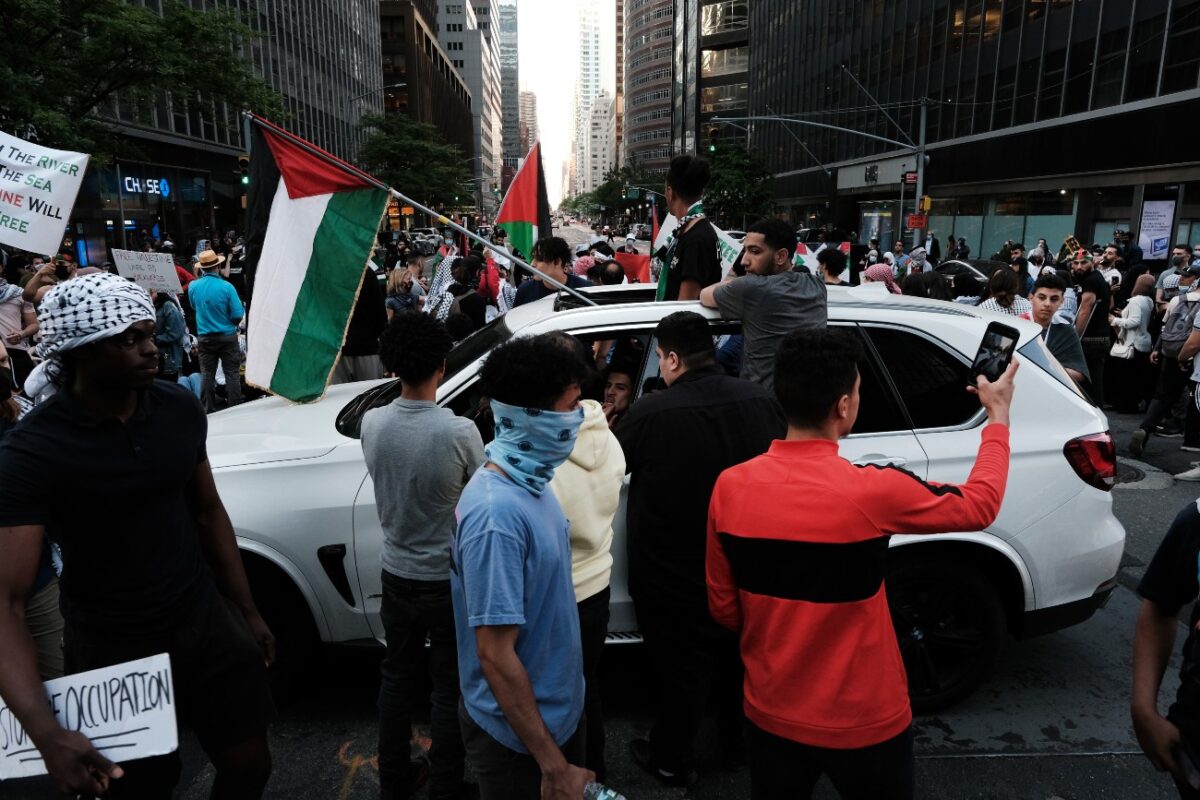 An activist organization that previously supported terrorism and another affiliated with a group that reportedly worked with terrorists organized dozens of anti-Israel protests in major U.S. cities over the weekend.

Samidoun, a group designated as a terror organization in Israel with active chapters in the U.S., advertised 80 demonstrations from Friday through Sunday, with 49 occurring in major cities across the U.S. on Saturday. The Palestinian Youth Movement (PYM), an anti-Israel group, organized a handful of the demonstrations.

“There are currently over 200 martyrs throughout Palestine and on the borders with Lebanon, and the entire land of Palestine is rising … confronting the most brutal violence of the colonizer with steadfastness, struggle, and a revolutionary promise of a liberated future,” Samidoun said.

Samidoun and the PYM helped organize “days of resistance” protests across the U.S. in August 2020 where some participants carried the flags of Hezbollah and the Popular Front for the Liberation of Palestine (PFLP). Both groups are designated as Foreign Terror Organizations by the State Department, the Daily Caller News Foundation reported.

Israeli forces continued airstrikes near Gaza City Monday after Hamas and other militant groups fired thousands of rockets into Israeli territory, the Associated Press reported. Since the attacks began at least 188 Palestinians have been killed and over 1,200 people were injured, while around 3,100 rocket attacks launched from Gaza have killed eight people in Israel.

Thousands of demonstrators protested for hours in Brooklyn, New York, on Saturday and climbed onto street lights, set off fireworks, and stopped traffic in some areas, NBC New York reported. Samidoun advertised the protest and listed its New York chapter as an organizer.

The “days of resistance” demonstrations were to “remind the world that the Palestinian people will continue to rise and confront all attempts of liquidation and destruction of the cause of Palestine and resist dispossession, exile, and genocide,” Samidoun said in a statement, the DCNF reported.

“If anybody understands the condition of the people in Palestine, it’s us,” Muhammad Abdullah said at a demonstration in Dallas, Texas, on Saturday. “When I see my Palestinian brothers and sisters and I look them in the eye I see my black brothers in south Dallas. That same struggle, the same pain that we go through.”

Thousands gathered in Los Angeles, California, carrying “free Palestine” signs and chanting “long live intifada (uprising),” KTLA 5 reported. The demonstration focused on “resistance until liberation” and was co-hosted by several organizations including PYM and the U.S. Palestinian Community Network, according to Facebook.

Hundreds of people participated in pro-Palestine demonstrations and marches in Atlanta, Georgia, Saturday, The Atlanta Journal-Constitution reported. Some carried signs saying “Palestinians, Muslims, Christians, and Jews are all being oppressed by Zionists” and “We can’t breathe since 1948.”

Thousands gathered for demonstrations in Washington, D.C., with Professor Noura Erakat calling for sanctions against and the demilitarization of Israel, video shows.

“We need sanctions! Demilitarize Israel!” said Professor Noura Erakat @4noura. “Save all of Palestine from the river to the sea! We will all be free!”

She led the group in chants of “Free, free Palestine!” before complimenting the movement for not giving up over decades. pic.twitter.com/uPJ79G2tmE