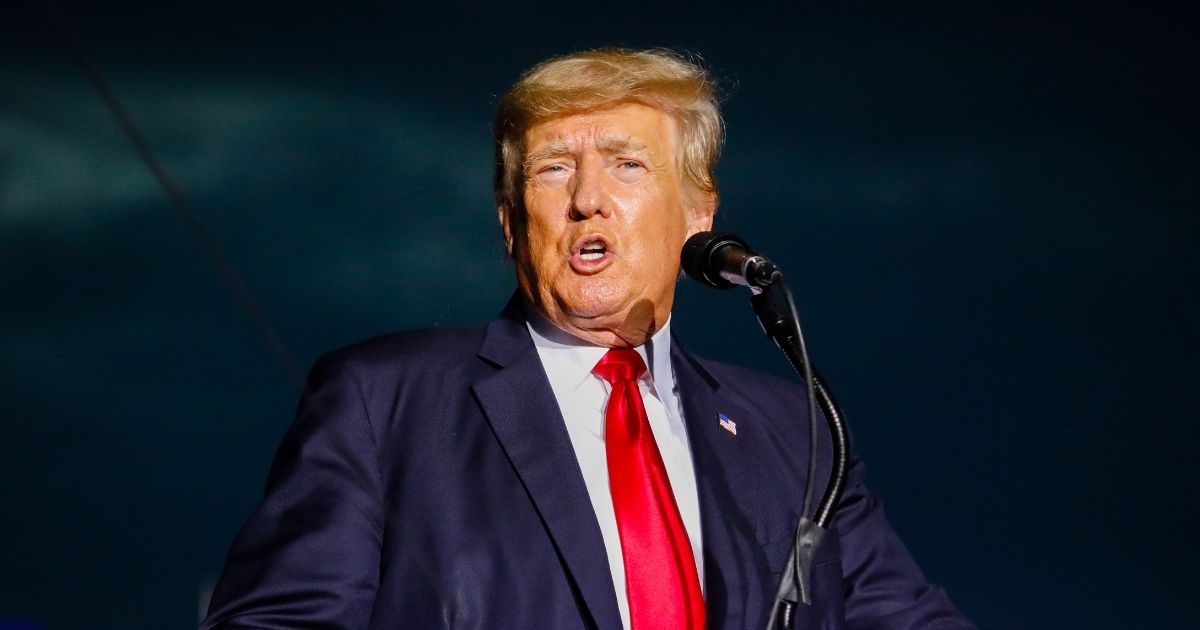 Former President Donald Trump urged Capitol Hill Republicans to walk away from any deal proposed by Democrats to pass an infrastructure bill.

A $1.2 billion infrastructure package has garnered some bipartisan support. Democrats also have a larger package they want to pass crammed with liberal priorities that at this point has no GOP support.

Trump issued a statement Friday urging Republicans to walk away from the promise of a bipartisan deal.

“Very important that Senate Republicans not allow our hard-earned tax reductions to be terminated or amended in an upward trajectory in any way, shape, or form,” he said in a statement.

The group also disagrees with Dem leadership strategy of waiting for reconciliation package to move the bills. pic.twitter.com/rmWv3RcD45

“They should not be making deals on increasing taxes for the fake infrastructure proposals being put forward by Democrats, almost all of which goes to the ridiculous Green New Deal Marxist agenda. Keep the Trump Administrations tax cuts just where they are. Do not allow tax increases,” Trump went on.

“RINO Republicans should stop negotiating the infrastructure deal—you are just being played by the Radical Left Democrats—they will give you nothing!” pic.twitter.com/a69KRCpEEY

“RINO Republicans should stop negotiating the infrastructure deal — you are just being played by the Radical Left Democrats — they will give you nothing!” Trump said, using the acronym for “Republican in name only.”

Senate Minority Leader Mitch McConnell has said the $1.2 trillion package has a chance of passage, according to The Hill.

“If that’s credibly paid for, as opposed to adding it to the debt, I think there’s a way forward on that portion of it,” McConnell said Tuesday.

He promised a “hell of a fight” if Democrats try to jam through the larger package — which will support child-care spending and other Democratic priorities — with no Republicans on board.

“The era of bipartisanship on this stuff is over. … This is not going to be done on a bipartisan basis. This is going to be a hell of a fight over what this country ought to look like in the future, and it’s going to unfold here in the next few weeks. I don’t think we’ve had a bigger difference of opinion between the two parties,” McConnell said.

Senate Majority Leader Chuck Schumer is moving forward with plans to bring the two proposals to the Senate in the coming weeks, CNBC reported.

“My intention for this work period is for the Senate to consider both the bipartisan infrastructure legislation and a budget resolution with reconciliation instructions, which is the first step for passing legislation through the reconciliation process,” Schumer wrote to his members Friday.

Reconciliation is the process the Senate uses to pass one-party bills that require only a simple majority for passage. The package Democrats want to pass through reconciliation could end up costing as much as $6 trillion, according to Fox News.

“Please be advised that time is of the essence and we have a lot of work to do. Senators should be prepared for the possibility of working long nights, weekends, and remaining in Washington into the previously-scheduled August state work period,” Schumer wrote.

Will Congress chip away at the 2017 tax cuts in order to fund new spending?

House Speaker Nancy Pelosi said her chamber will act once the Senate has done its work.