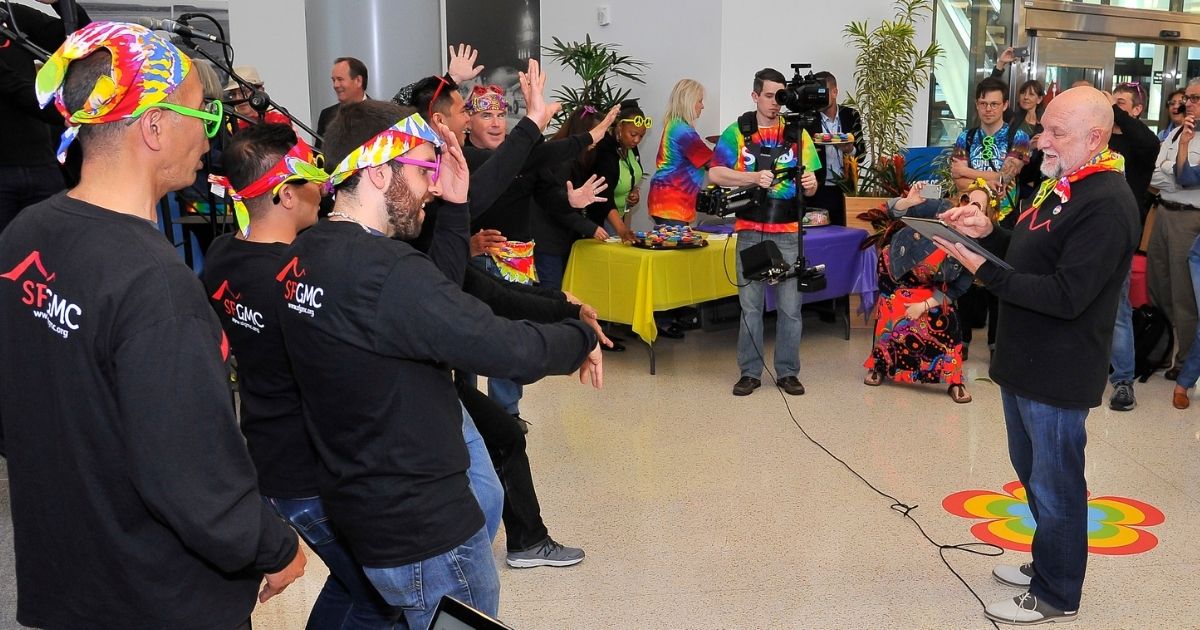 That didn’t take long: The San Francisco Gay Men’s Chorus is now blaming “far-right conservative media” for taking the lyrics to a music video in which it sang “we’ll convert your children” out of context for “their intolerant and hateful needs.”

If you missed it, on July 1, the chorus posted a video of a creepy song titled “A Message from the Gay Community.” It apparently was supposed to be satire, but in an echo chamber, you don’t really hear how your own words sound.

The song was dedicated, ostensibly, to people who believe in the Bible (the SFGMC didn’t mention any particular religion, but one guesses this was aimed at only one particular Abrahamic faith), think the Bible means what it says about same-sex relationships or transgender issues and intend to teach their children accordingly.

However, lyrics like these, while they might sound hilarious to those of a certain mindset, don’t travel well outside a certain bubble — even if you ignore the thoroughly unpleasant grooming double entendres they’re playing with throughout the song:

You say we all lead lives you don’t respectBut you’re just frightenedYou think that we’ll corrupt your kids if our agenda goes uncheckedFunny, just this once, you’re correct.

And the chorus, just in case you were wondering:

The whole message was that it wasn’t all right for us to just “coexist,” as per that shopworn old bumper sticker. If you or your kids weren’t ebulliently supportive of LGBT individuals, they were coming for your kids first. Then, as they said at the end of the song, your kids would be coming for you next. Your approval is mandatory. Get that rainbow-hued Facebook profile picture frame ready for next June, please and thank you.

At least on the “coming for your children” part of the equation, it turns out the SFGMC been doing that for a while; the group has an outreach program that “brings SFGMC into elementary, middle, and high schools across the Bay Area to share a message of love, inclusivity, and strength.”

According to an archived version of the SFGMC’s webpage, the program started in 2018.

RHYTHM (Reaching Youth Through Music — everyone loves a too-precious acronym, even when it doesn’t quite fit) is described on its website as “a workshop series comprised of FOUR components that spans over the course of two weeks.”

First, there’s a “45-minute workshop with the school’s GSA club where students discuss the school’s climate and inclusivity. Together, they create action steps on solutions that could help bring more acceptance and allow all students to live their most authentic lives.”

(I’m assuming there might be a narrow range of “most authentic lives” accepted. For instance, I don’t think the workshop would “create action steps on solutions” to allow a Republican student to wear a Reagan/Bush ’84 T-shirt to a Bay Area school without getting beaten up by the yoga team.)

That’s followed by a “choral master class with SFGMC’s Associate Artistic Director. If the school has a choral program, the group is invited to sing one of its songs included in the RHYTHM program with the SFGMC singers. Our Associate Artistic Director, Mitch Galli, does a master class with the choir to prepare the students and soloists for the performance.”

“The pinnacle of the workshop is a 40-55 minute performance by RHYTHM from ~50 SFGMC singers,” the website says.

Do you think this video is creepy?

“The performance is a combination of song, story, and an informational dialogue with a facilitated Q&A at the end. In between songs, students will meet our singers on a more intimate level, learn about what it was like growing up gay, understand the struggles and liberations of coming out, and finally embracing their authentic self.

“The workshop series concludes with a Meet and Greet Luncheon with the GSA students and the SFGMC singers. This lunch creates a space for the students to get to know the singers better, ask follow-up questions about the RHYTHM performance, and find new role models.”

There are five goals listed:

• “Encourage students to better understand who they are as individuals.”• “Accept and foster LGBTQ youth and their peers to be their authentic selves.”• “Guide youth to make positive choices surrounding acceptance.”• “Increase awareness that identifying as LGBTQ is not a choice.”
• “Serve as role models.”

It also has a curriculum called Outside Voices that it authored with the It Gets Better Project, a pro-LGBT youth-oriented organization. It’s described as “a fantastic opportunity to have students turn their own personal stories into a performance art piece and encourages youth to use their outside voice.”

Quick question, then: Will this be part of the RHYTHM visits or the curriculum?

“We’re coming for your children”

“We will convert them”
pic.twitter.com/gj6ZxhxNRl

“On July 1, we posted ‘Message from the Gay Community’ to SFGMC TV and across social media,” read a Thursday statement from the group. “It was chosen for how loved it was when we performed it live here in San Francisco at Pride, at SingOuts, in South Carolina and at the Pride Showcase. The piece was commissioned with the Oakland Symphony who shared it with us.

“The far-right conservative media found our ‘Message…’ video and have taken it as their cause. This has all happened in the last 24 hours and it continues to pick up steam. They have taken the lyrics out of context to support a narrative that suits their intolerant and hateful needs. It is obvious the tongue-in-cheek humor is lost on many. As a result, we have seen the user comments on YouTube, Facebook and Instagram become increasingly alarming. Emails to individuals and the chorus office are vitriolic — including threats of harm.”

An Important Message to the Chorus Family. ❤️ pic.twitter.com/XBpSY6r4j7

Later in the message, the chorus says, “We will always accept others who may hold different values, but when violence is their choice of expression, since 1969 we have not backed down.” That part would normally be excellent, something where most of us would concur.

And then, the very next sentence: “After decades of children being indoctrinated and taught intolerance for anyone who is ‘other,’ from using the Bible as a weapon to restorative therapy, it’s our turn. We have dedicated ourselves to being role models, teaching, and spreading the message of love, tolerance and celebration through our music.”

Oh. So you “will always accept others who may hold different values,” but it’s your turn to do the indoctrinating here. I’m glad we clarified that. (And it’s good to see my prediction that they’d only care about one particular Abrahamic faith seems to have panned out.)

As always in these cases, the actual concerns surrounding “A Message from the Gay Community” got drowned out over allegations of violent threats and rhetoric that prima facie dismisses anyone who found the video problematic as a homophobe.

Those who make violent threats are obviously cretinous and need to be arrested and charged to the fullest extent of the law, but those aren’t acts suborned or approved of by conservative media, and the tacit link between the two in the SFGMC’s statement is inexcusable.

Also, about this “far-right conservative media” — when I wrote about this, the two outlets I’d seen with significant coverage on the video were The Daily Wire and Not the Bee. My piece was published later on and I can’t entirely speak on what happened in the interim, but if the SFGMC’s idea of the “far-right” is Ben Shapiro’s website, an offshoot of the Babylon Bee, us and other similar outlets, I’d proffer they don’t get out of that Bay Area bubble enough.

Furthermore, it’s not like this was just conservative media. When The Daily Wire reported on this, there had been 64 upvotes as opposed to over 3,000 downvotes for the video on YouTube. Given the ecosystem there, that should have been a sign.

The song sounded vaguely cult-like. As a work of satire, it was ham-fisted. The grooming double entendres were tasteless at best.

The biggest problem was that the message literally wasn’t a joke, though. There’s no “tongue-in-cheek humor” here. If you want to share biblical values on sexuality with your children — even if you make it clear there’s to be no hate involved, since “anyone who hates a brother or sister is in the darkness and walks around in the darkness” — they’re still coming for ’em.

People weren’t upset because they saw gay men on their screen and worked themselves into some sort of frothing homophobic rage straight out of the Westboro Baptist playbook. They looked askance because the SFGMC said “we’re coming for your children” and “we will convert them” — not just into believing LGBT individuals should be able to live their lives the way they want, but into believing those individuals must be affirmed and celebrated by everyone, your belief in biblical truth be damned. Assimilate or else.

Jocund though the intent may have been, that’s actually what the song is saying. There’s no misinterpretation or missing context. And, as the RHYTHM outreach group proves, SFGMC has been practicing what it preaches.