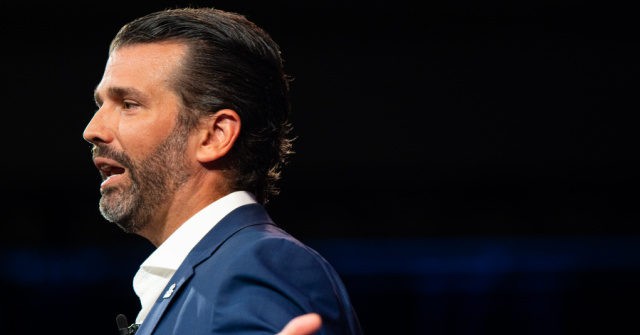 While warning Dallas CPAC attendees to call their Senators and urge opposition to David Chipman, Donald Trump Jr. took time to troll leftists over their gun ignorance and subsequent desire to ban rifles that do not exist.

He smiled and added, “I love my fully semiautomatics.” Amid the applause he noted, “There’s no such thing folks, but they don’t know that.”

Conservatives across the country must do everything in our power to block his nomination!!! pic.twitter.com/tfO1qbzAtu

On March 10, 2020,  Breitbart News reported that Biden told a Michigan autoworker about taking “the AR-14s away.”

The conversation between Biden and the autoworker began with the worker expressing concern Biden would infringe on the Second Amendment and Biden responding by claiming the worker was “full of sh*t.”

On November 10, 2019, Biden stood in front of a New Hampshire audience and criticized the ownership of magazines that hold “100 clips.” CSPAN published video from the campaign stop, where Biden said, “I believe in the Second Amendment, but nobody says you can have a magazine with 100 clips in it.” He quickly added, “100 bullets in it.”

AWR Hawkins is an award-winning Second Amendment columnist for Breitbart News and the writer/curator of Down Range with AWR Hawkins, a weekly newsletter focused on all things Second Amendment, also for Breitbart News. He is the political analyst for Armed American Radio. Follow him on Twitter: @AWRHawkins. Reach him directly at [email protected]. Sign up to get Down Range at breitbart.com/downrange.