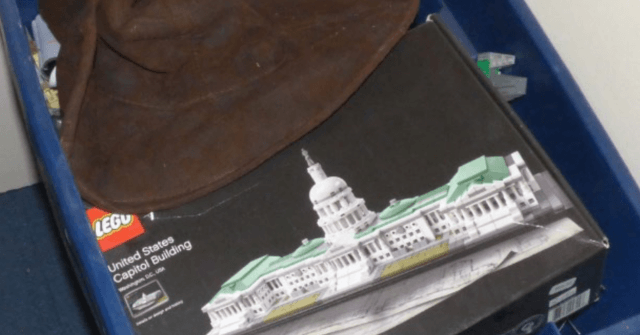 The Department of Justice (DOJ) has withdrawn its claim that a Capitol riot suspect was found to be in possession of a “fully constructed” LEGO set depicting the U.S. Capitol; the LEGO set was still contained in a box, the DOJ said Friday.

Robert Morss, a substitute social studies teacher, allegedly engaged in violent behavior during the riot, according to the Pittsburgh Post-Gazette …

In court documents filed July 2, as the Department of Justice pushed for Morss to be detained until trial, the federal government noted:

During his arrest, law enforcement recovered some clothing and other items that appear to match those he carried with him on the 6th – including a “Don’t Tread on Me” flag, a neck gaiter, a military utility bag, a black tourniquet, and military fatigues. (Law enforcement also recoverd a fully constructed U.S. Capitol Lego set.) In addition, MORSS had three different firearms including a handgun, a shotgun, and a rifle.

The Capitol set is one of the most sought-after and most expensive LEGO sets, currently priced at $266.95 at Amazon.com.

However, in a new filing, the DOJ said:

In the original detention memoranda, the undersigned stated that law enforcement found a “fully constructed U.S. Capitol Lego set.” Please note that after a review of the photographs from the search, there appears to have been a miscommunication and that statement appears to be inaccurate. The Lego set was in a box and not fully constructed at the time of the search, as pictured below.

The DOJ is seeking to ensure that Morss remains in custody, pending trial.