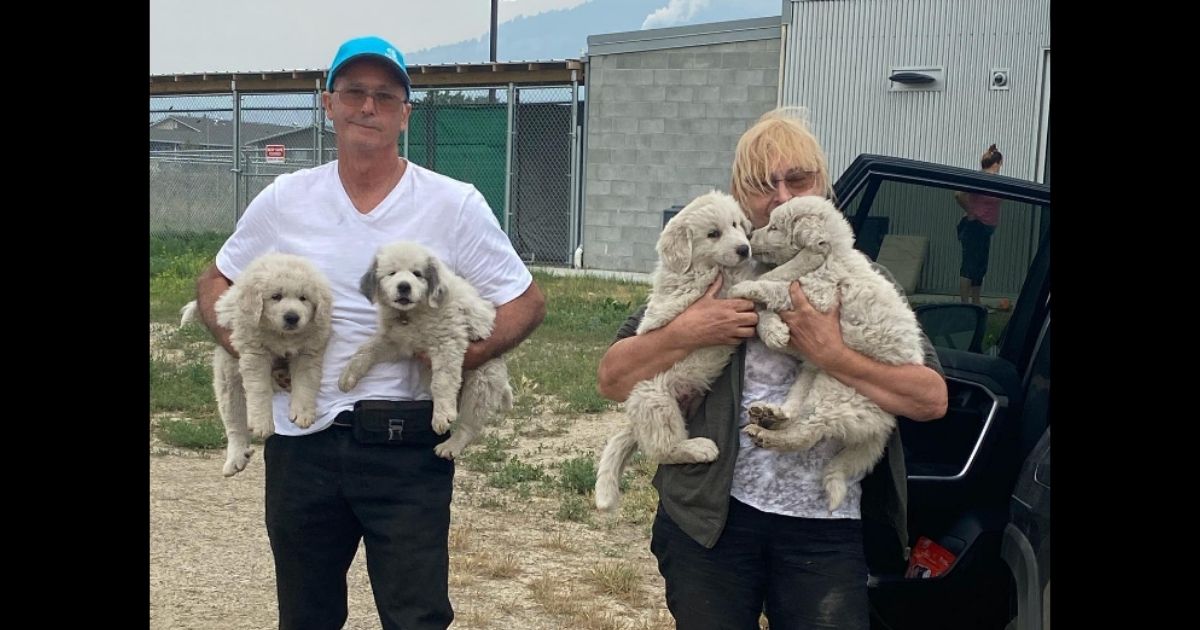 Don Glasgow and Tricia Thorpe had found a little piece of paradise in Lytton, Canada. Their farm was home to goats, chickens, alpacas, sheep, cats and dogs — but last week, their home was razed.

A fire tore through Lytton on June 30. According to a GoFundMe page set up for the couple, they did all they could to help others evacuate, not realizing they wouldn’t be able to go back home to save their animals.

After the fire hit their farm, the area was still deemed dangerous. Not knowing the state of their property or pets, Thorpe sent out a desperate plea to a local Facebook group.

“Hi all, As like so many of you, Don Glasgow and I lost everything,” she wrote.

“Miraculously, a few of our sheep and alpaca survived as did 3 of our 4 adult dogs and 5 or 6 of our 9 6.5 week old puppies. We are desperate to get them out but … we cannot even though we are willing to sign any waiver [they] ask.

“We have volunteers and family members trying to even get food into the animals but cannot. Is there anyone able to get in to the area who can help at least with getting food in to the sheep and alpaca? … They are all we have left and there are puppies and singed animals.”

Many locals responded, offering advice and assistance. After much pleading, the British Columbia wildfire team agreed to scout out the area and give food and water to any surviving animals.

“A HUGE HUG and much, much gratitude to the BC Wildfire crew lead by Chad G,” Thorpe wrote in a comment on her post on Saturday. “They got food into our animals. Confirmed there are 7 (super cute- his words) slightly singed puppies there.

“He said they will feed animals ..their pleasure. So so happy and grateful. They have so much on their plates and came to the rescue!”

Jamie Von S, one of the firefighters, also posted in the group and shared a photo of the dogs they found on the property.

“Tricia Thorpe, we managed to get access to your property and made contact with the animals and Barbara,” he wrote.

“All 7 pups are ok and in good spirits, adult dogs too (although the mom was a bit tired). We gave them fresh clean water, puppy chow for the day and even scrounged a few marrow bones and kibble for the adults … and will check on them again tomorrow.

“The alpacas and sheep were given a bag of alfalfa pellets as it was all we had unfortunately and we replaced their water as well.”

By Monday Thorpe couldn’t wait any longer. She and Glasgow made a break for it.

They snuck in and were able to get to their farm. They found that all nine puppies had survived (despite earlier reports indicating only seven had been found), as well as their 13-year-old cat, but they had lost quite a few of their feathered and furred residents.

Five sheep and four alpacas were also rescued, but the rest of the livestock had perished or could not be found.

Thorpe recognizes that she broke the rules and could get in trouble.

“In my opinion, I put the police and security kind of between a rock and a hard place, because they have official rules they have to follow, and then there’s humanity and compassion, and like I told them, it had been five days,” she told Castanet.

“I was really lucky to be able to do what I did, and what I did was not right. It put people in a difficult situation. I was desperate.”

The dogs and livestock are being cared for by rescue groups until Thorpe can find more permanent lodgings, and a friend set up the GoFundMe page to help them rebuild their farm.

According to Global News, the SPCA of British Columbia has been collecting requests from pet owners in the area and will be scouring properties for surviving animals.

Amanda holds an MA in Rhetoric and TESOL from Cal Poly Pomona. After teaching composition and logic for several years, she's strayed into writing full-time and especially enjoys animal-related topics.

As of January 2019, Amanda has written over 1,000 stories for The Western Journal but doesn't really know how. Graduating from California State Polytechnic University with a MA in Rhetoric/Composition and TESOL, she wrote her thesis about metacognitive development and the skill transfer between reading and writing in freshman students.
She has a slew of interests that keep her busy, including trying out new recipes, enjoying nature, discussing ridiculous topics, reading, drawing, people watching, developing curriculum, and writing bios. Sometimes she has red hair, sometimes she has brown hair, sometimes she's had teal hair.
With a book on productive communication strategies in the works, Amanda is also writing and illustrating some children's books with her husband, Edward.