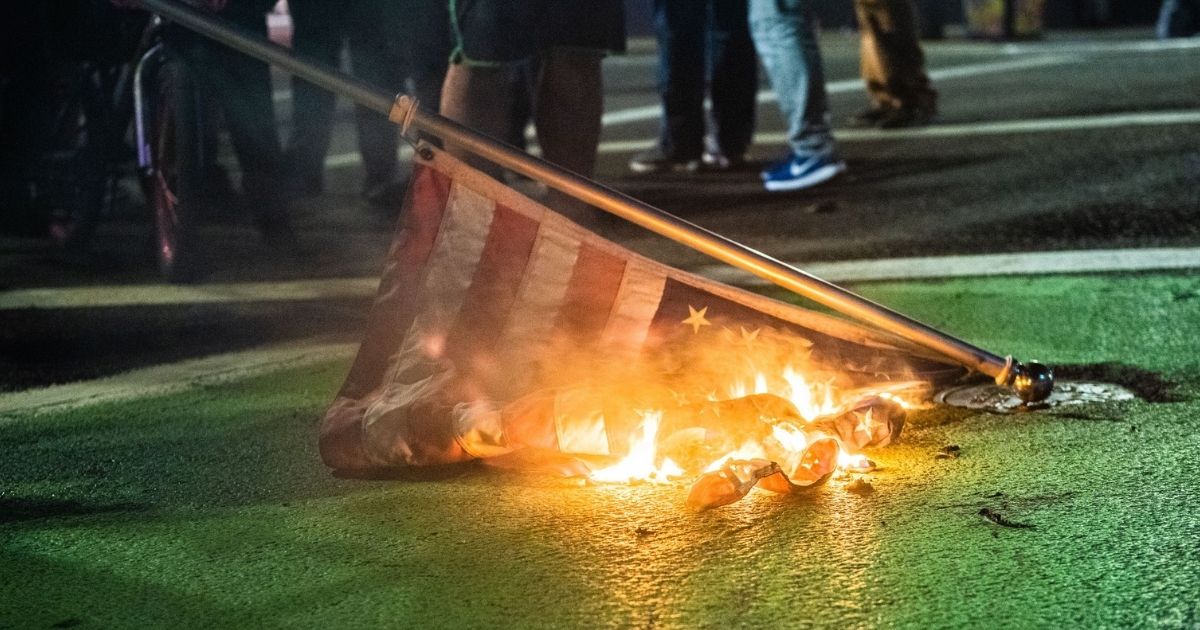 The Utah chapter of Black Lives Matter Utah condemned the American flag on the Fourth of July, calling it “a symbol of hatred” and declaring that anyone who flies it is a dangerous, low-IQ “racist.”

The group claimed to speak for all black Americans when it disavowed the U.S. flag on the nation’s birthday, saying it does not represent black people.

So anyone who flies the Stars and Stripes is racist? Okay.

Each year, Memorial Day offers us a chance to reflect on the enormity of the sacrifices that generation after generation of Americans has made. pic.twitter.com/yARTptfyO2

After receiving backlash for pulling the anti-American stunt on Sunday, BLM Utah doubled down on its hateful comments in a follow-up post.

Do you think the American flag is a racist symbol?

“The controversy stems from me calling the American flag a symbol of hate. I stand by my words,” chapter founder Lex Scott wrote on Facebook.

Scott claims the American flag is racist and threatening because “white supremacist” groups such as the Ku Klux Klan co-opted it by waving it around during their marches.

“I want you to walk in my shoes for a second,” Scott wrote. “You show up for a protest and hundreds of armed white men show up. They have guns, they yell racial slurs at you, they are carrying and wearing American Flags.

“When the Klan holds a rally, they carry American Flags.”

For reference, the KKK was founded by the Democratic Party, according to black political scientist Carol Swain, a former Democrat who switched parties in 2009.

Essentially, Scott made the absurd argument that because some racist people waved a U.S. flag, the flag is now contaminated and has become a racist symbol of hatred.

“I feel fear. That is not up for debate. I feel like the person flying it is racist, because every racist that I have come in contact with is either wearing that flag or flying that flag. I feel as if I should avoid that person because they may be dangerous,” Scott explained.

This is as illogical as saying that because some people you dislike wore a black T-shirt, all black T-shirts are now evil and dangerous.

How does the Black Lives Matter movement feel about BLM Utah appropriating its name and causing public confusion about whether that chapter speaks for BLM as a whole?

And what about the fact that BLM Utah claims to speak for all black Americans vis-à-vis the flag? Isn’t it racist to assume that all black people are monolithic? Just like it would be racist and ignorant to say all white people are the same.

The hateful, anti-American rhetoric of some black activists who denounce the U.S. flag and the national anthem and demonize white people has been a troubling trend that has skyrocketed during the past year.

For example, members of a heavily armed black separatist group were arrested on Saturday after an eight-hour armed standoff with Massachusetts police.

The armed militia, which calls itself the Rise of the Moors, waved the flag of Morocco during its tense standoff on Interstate 95. The group claims all the land in the United States belongs to the Moors.

The group of black nationalists has gotten little attention from the feds, despite their profile being much higher right now than mostly nonexistent white nationalists. https://t.co/I238oXJvWx

Democrats and their media puppets are stoking racial resentment and division by overhyping the nonexistent threat of phantom “white supremacy” while downplaying or ignoring the actual threat of extremist black-supremacist groups.

It is time for leftists to stop pushing false narratives and fomenting dangerous race wars before the country implodes. We are on the brink.