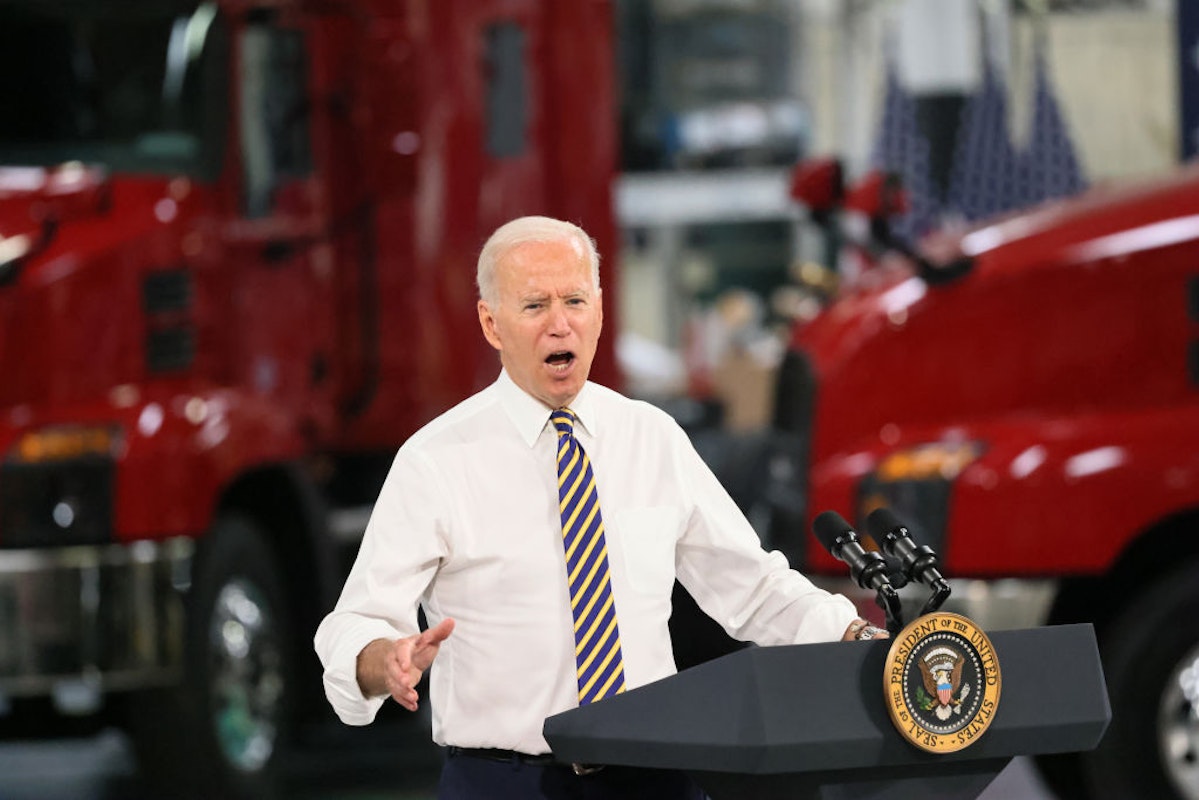 Adding to the ever-expanding list of his questionably factual statements in order to impress his audience, on Wednesday President Biden insisted at a Mack Truck facility in Pennsylvania that he had driven an 18-wheeler before.

Joe Biden, a career politician who has been in politics for 48 years, claims he “used to drive an 18 wheeler.” pic.twitter.com/eOXI9pwF2g

“There is scant evidence that Biden has ever driven an 18-wheeler truck,” Fox News noted, adding, “When asked if the president had ever driven such a truck, a White House spokesperson pointed to a December 1973 article from the Wilmington Evening Journal that showed Biden rode in an 18-wheeler on a 536-mile haul to Ohio.”

After Fox News pointed out that riding in an 18-wheeler was not the same as driving the vehicle, “the president’s spokesperson pointed to a United Federation of Teachers post that touched on Biden driving a school bus in the past as a summer job,” Fox News reported.

Fox News cited SchoolBusFleet.com explaining that most school buses, on average, “have two axles, with the bigger models having two wheels on the front axle and four wheels on the dual axle, for a total of six wheels.”

In April, during his address to Congress, Biden claimed regarding Chinese President Xi Jinping,“I spent a lot of time with President Xi, traveling over 17,000 miles.”

“Biden has repeatedly made this claim and The Washington Post debunked it, awarding it three Pinocchios. The Post said it ‘could not get the travel to add up to anything close to 17,000 miles,’” The Daily Wire noted.

Even leftist Shaun King took aim at Biden for his history of prevaricating, saying in 2020, as the Washington Times reported:

Since the early 1970s, Joe Biden has been a serial liar … In 1987, when Joe Biden was running for president for the very first time, his campaign got swallowed up in a swarm of lies that [he] told about himself all over the country. First, Biden was caught plagiarizing a famous speech from, then, British Labor Party Leader Neil Kinnock — including parts of the speech that came straight from Kinnock’s personal life that were not true for Biden.

Then, he plagiarized yet another speech from the late Robert Kennedy and another from JFK and another from Hubert Humphrey … Soon, it was discovered that Biden had not just plagiarized those four speeches, but had lied about academic awards [that he never earned], lied about scholarships [that he never received], and lied about his ranking in law school [stating he graduated in the top half of his class when in fact he finished 76th out of 85].

Biden was so brazen that on several occasions he claimed he was in Selma and Birmingham during the great civil rights movements. He repeated these falsehoods numerous times, some even after he was caught in the lies. A decent man does not do this, a deceitful man does.

Not satisfied with stealing the glory from those who actually sacrificed during the civil rights movement, in February 2020, while campaigning in South Carolina, Biden said, “I had the great honor of being arrested with our U.N. ambassador on the streets of Soweto trying to get to see (Nelson Mandela) on Robbens Island” (according to Politifact). This was the third time he repeated the lie.