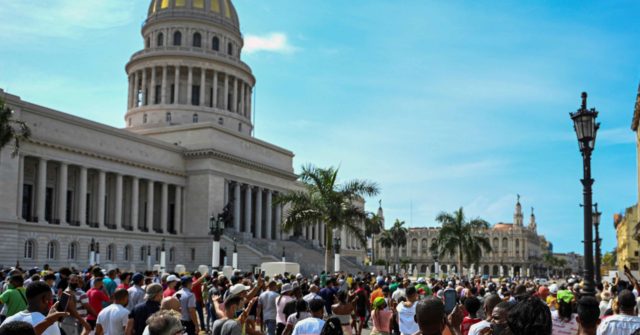 President Joe Biden’s administration responded to protests in Cuba against the Communist regime on Sunday by issuing a statement through a minor official commending protests “about rising COVID cases/deaths & medicine shortages.”

On Sunday, protests broke out in Havana and several other Cuban cities, during which people chanted “Freedom!” and “Down with the dictatorship!” while marching against Communist Party institutions. The New York Times noted that while the demonstrations were triggered by “food and medicine shortages,” they also “openly protested against the Communist government” for the first time in nearly 30 years. Some activists called it the largest spontaneous popular protest since Fidel Castro took power in 1959, with protesters openly denouncing the regime of Miguel Diaz-Canel.

JUST IN – Mass protests erupt in several cities in #Cuba over the poor state of the socialized medical system. Protesters demand freedom from communist dictatorship.pic.twitter.com/NOSdVgP0By

This is deeply moving.

Watch as Cubans wave the American flag while marching against the island’s 62 year-old communist dictatorship on the streets of Havana.

Julie Chung, Acting Assistant Secretary for the U.S. Department of State’s Bureau of Western Hemisphere Affairs, said via Twitter that Cubans were exercising “their right to peaceful assembly” to protest COVID and “medicine shortages.”

Peaceful protests are growing in #Cuba as the Cuban people exercise their right to peaceful assembly to express concern about rising COVID cases/deaths & medicine shortages. We commend the numerous efforts of the Cuban people mobilizing donations to help neighbors in need.

Cubans do not have the “right to peaceful assembly”; like many rights in the Cuban Constitution, it exists only in theory.

The Biden administration’s attempt to spin the protests as a demonstration about COVID-19 mirrors the rhetoric of the 2020 presidential election, during which Democrats charged that the Trump administration had failed on the pandemic.

It could also be an effort to defend the Obama administration’s “normalization” policy toward Cuba, in which then-Vice President Biden participated, which restored full diplomatic relations with the regime but failed to demand democratic reforms or progress on human rights.