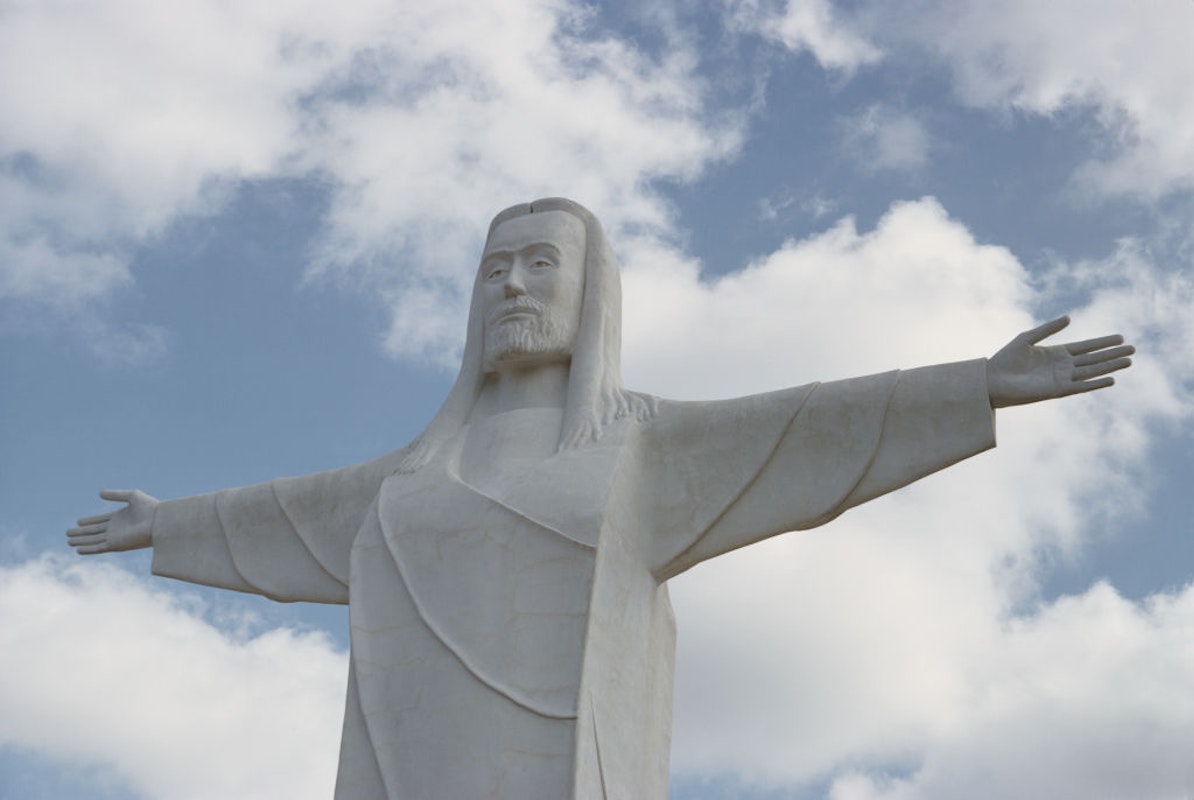 A left-wing group defaced the prominent Christ of the Ozarks statue near Eureka Springs, Arkansas, on Thursday night with a 44-foot banner that said “God Bless Abortions.”

“Indecline, an activist group that took responsibility for hanging the banner, wrote on Instagram they are not ‘pro-choice or anti-life,’ but sent the message as a way of saying ‘abortion is a… miracle worth saving,'” according to the Lexington Herald Leader.

“The 65-foot statue is located in Eureka Springs on Magnetic Mountain. It’s one of five known giant statues of Christ in the world, according to the Encyclopedia of Arkansas,” the outlet continued. “The statue can been seen from 20 miles away.”

“Members of Indecline disguised themselves as a construction crew to sneak onto the property, then used pulleys and other climbing gear to hang the banner,” according to Fox News.

The Christ of the Ozarks statue was built in 1966 with 24 layers of white mortar and weighs 2 million pounds. It was sculpted by Emmet Sullivan, who studied under Gutzon Borglum, who was one of the sculptors of Mount Rushmore.

Indecline also made headlines in 2016 for erecting an unflattering statue of former President Donald Trump in New York City’s Union Square, which depicted him as a morbidly obese man with a micropenis.

Indecline issued a lengthy Instagram post explaining their demonstration, writing in part, “In the movie 2001 Space Odyssey, a black monolith becomes the driving force of human evolution. In Eureka Springs, Arkansas, a simple stone colossus of Jesus reminds us how quickly that process can be reversed.”

The post went on to denounce the statue’s funder, Gerald K. Smith, who was a Nazi sympathizer who wanted to start a religious theme park.

“In Arkansas, there is only one 65-foot statue of Jesus,” the post continued. “There is also only one abortion clinic. No professional sports teams. Just a bunch of angry men with no outlets, writing outrageous laws about vaginas. That, and the second highest rate (by state) of infant mortality. It’s hard to see how “pro-life” can be so myopic in its vision of what life is.”

“The sphinx famously presented a riddle that was to be solved on penalty of death. In Arkansas, that riddle has something to do with ridiculous statutes based on a cheap, performative morality. In their eyes, Mary Magdalene was a whore, not a favored disciple. That’s just how they see a woman’s place in the world. And her body is a place too, private property to be legislated by a group of landlords.”

“We think Jesus would understand the concept of a difficult decision. He supposedly had to make a few of them and understood sacrifice very intimately. The Christ of the Ozarks is visible from miles away, so we just treated it like a billboard. We aren’t necessarily ‘pro-choice’ or ‘anti-life,’ those terms are double-speak. We just think abortion is a goddamn miracle worth celebrating. It saves lives, but those lives are usually female.”

“When people have strong beliefs about decisions that don’t affect them, those beliefs are worth questioning. We are just here to ask those questions. Perhaps they get us farther than beliefs. And maybe Jesus never intended to be a statue, nor a billboard. But then again, he’s not supposed to be pro-choice, so we guess he’ll just have to live with it.”