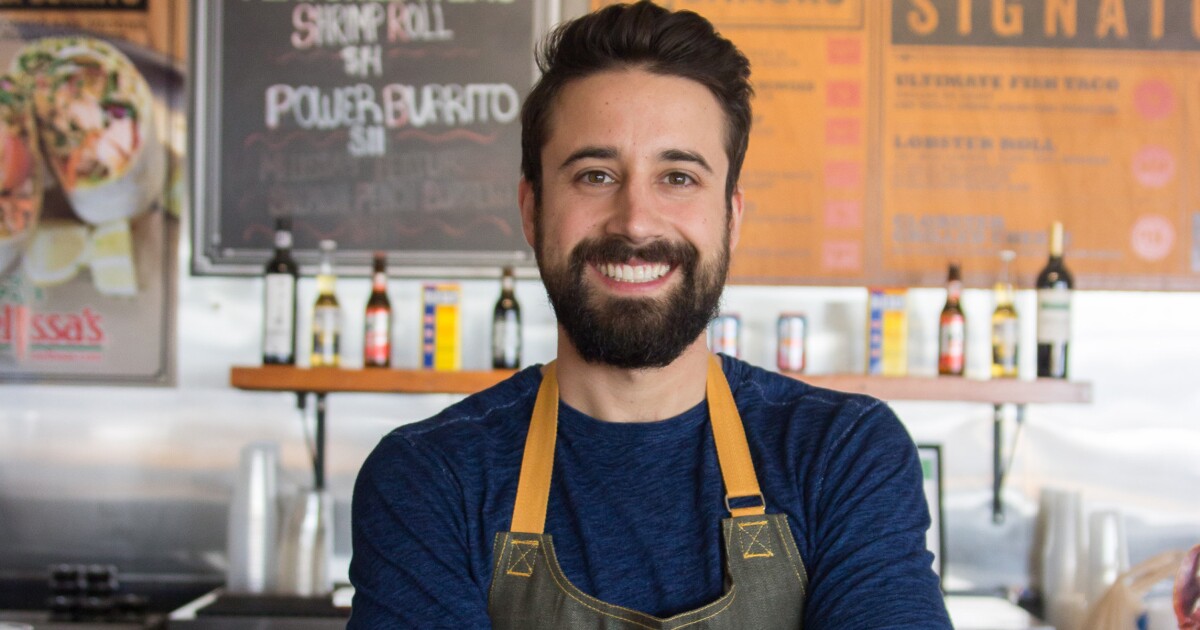 Or this, from January, posted along with a photo of the swearing-in of the new Congress, in which members were not practicing social distancing:

“By current lockdown standards, this is pretty risky behavior. Not as risky as outdoor dining or course [sic], but those optics.”

It may seem incongruous, but Andrew and his wife Lauren, also a trained chef, have become known both as seafood mavens and for their staunch opposition to overly strict lockdowns imposed by politicians who often don’t seem to follow the same rules. The Huntington Beach, California, couple, who have four children, walk the walk: The Gruels have turned their advocacy of struggling restaurant workers into a six-figure GoFundMe to help those workers.

The family has been living the American dream, California-style. Over the past decade, the Gruels took their love of sustainable seafood, which Andrew served first from a food truck in 2011, and built up a popular seafood restaurant chain called Slapfish. That led them to pursue a passion project they called Butterleaf, a plant-based concept, perfect for health-conscious Southern California. It was their work on Butterleaf that opened their eyes to the price Californians were paying for Gov. Gavin Newsom’s lockdowns.

“Right before the pandemic, we put all our time into Butterleaf,” Andrew told the Washington Examiner. “We invested a ton of money, our savings, to try to get it up to cruising altitude to try and launch that as a brand. Then, the pandemic hit. It just devastated us.” The state sent an incredulous Andrew and Lauren the bill for their annual tourist tax for Slapfish, about $11,000. When they didn’t pay it immediately, they got the same bill with an extra $3,000 penalty fee tacked on.

“We’re like, in California, tourism is banned,” Andrew said. California shuttered tourist attractions and then hit them with taxes and fees as if they were open for business. It became clear that forcing prolonged closures was only one front in the state’s war on the restaurant industry. California was looting the businesses that were struggling because of state policies, and Andrew understood that without high-profile advocacy, these businesses and their employees had no chance.

“We’ve always tried to stay outside of the [political] fray,” he said. Then, one day in April, he tweeted “that we can, as restaurants, rationally suggest ways in which restaurants can stay open while maintaining safe protocols and procedures and still care about the community.” The response was immediate and harsh. California residents and restaurant peers, even from out of state, accused the Gruels of valuing profits over people and threatened to boycott them. “It was like a dividing line,” Andrew recalled. “You had to be on one side or the other. There was no in between.”

The Gruels reconsidered. Maybe we should just tone it down. “Then, five days to slow the spread turned into 30 turned into 60.” Then came the political favoritism in government loans and exemptions for “businesses that coincidentally happened to be close to political operatives.” At that point, Andrew said, they realized that “for the purposes of survival, we’ve gotta kinda open our mouths a bit more.”

Even when the state permitted some reopening, it was undermining those same businesses by giving employees more of an incentive to stay home. Lauren remembers, “Our employees were making more with the extra $600 a week.” Andrew said he wished Newsom would have essentially paid restaurants to shut down, as a buffer to cover both the restaurant and its otherwise-unemployed workers. Instead, relief plans set the two against each other. Lauren and Andrew worked in their restaurants themselves to keep cash flow going. They continued to operate on “thin margins just like everybody else,” Andrew said, but eventually were able to increase sales at their local restaurants enough to get by.

In November, Newsom was caught at a lobbyist friend’s party at the famed French Laundry restaurant — a month after he added outdoor dining to the indoor dining ban. Andrew went on Laura Ingraham’s show on Fox News and told viewers he was sick of the hypocrisy of politicians, especially when, as a restaurant owner, he had tried to “follow the science,” spending thousands on plexiglass so patrons could eat outside safely at his restaurants only to have it banned. (Gruel told the Washington Examiner that a friend in the news business tried to get him to appear on CNN, but a producer had already labeled Andrew “toxic” since he had been on Ingraham’s show.)

By December, the Gruels were fed up. Andrew posted a 90-second video on Twitter explaining why the state should continue to allow outdoor dining. His case was brief but compelling. He closed with this bombshell: “We’re staying open. Outdoors. It’s that simple. I’m not an a–hole. The governor is.” Andrew wasn’t the only one to speak out — several restaurateurs and wineries have since sued Newsom over the arbitrary ban — but he was one of the first and most articulate.

The video went viral. The attention spread and became a catalyst for altruism. People from all over the country began telling the Gruels they wanted to send money so he could help hurting restaurants and their employees. The Gruels had been doing their part, offering meals to children, first responders, EMS workers, and doctors for free. (People actually purchased scrubs to fake being a medical doctor for free food.) But they wanted to do more.

John Gordon, an author and a friend, suggested the Gruels set up a GoFundMe. They set a modest goal of $5,000 and surpassed it overnight. Dave Portnoy of Barstool Sports drew attention to it and later started a similar venture of his own. The fund has required a significant amount of Lauren’s attention. It was especially busy around Christmas.

“I was in tears most of the time because the stories were so heartbreaking,” Lauren recalled. “They couldn’t buy their kids food. Their water was shut off. Their electricity was turned off, or about to be turned off within the hour. They couldn’t pay rent. They couldn’t afford Christmas gifts for kids.” Most people asked for nominal sums. “The most someone asked for was $2,500, but that was a family of six that included two parents who were in the restaurant industry, both of whom had lost their jobs.”

Andrew has been on half a dozen network shows now and endured his own battle with cancel culture, though he was quick to say the support has far outweighed the hate. And the Gruels don’t think of themselves as political activists or this issue as inherently political. Quite the contrary, the politicizing of dining is one thing they’d like to reverse. As Andrew says, “Restaurants are independent representations of Main Street.”

As for the future of those Main Street mainstays, Andrew said: “I think there is hope for restaurants, and in pockets of California, there is rational thinking, but I do think California is far gone.”

Nicole Russell (@russell_nm) is a contributor to the Washington Examiner’s Beltway Confidential blog.