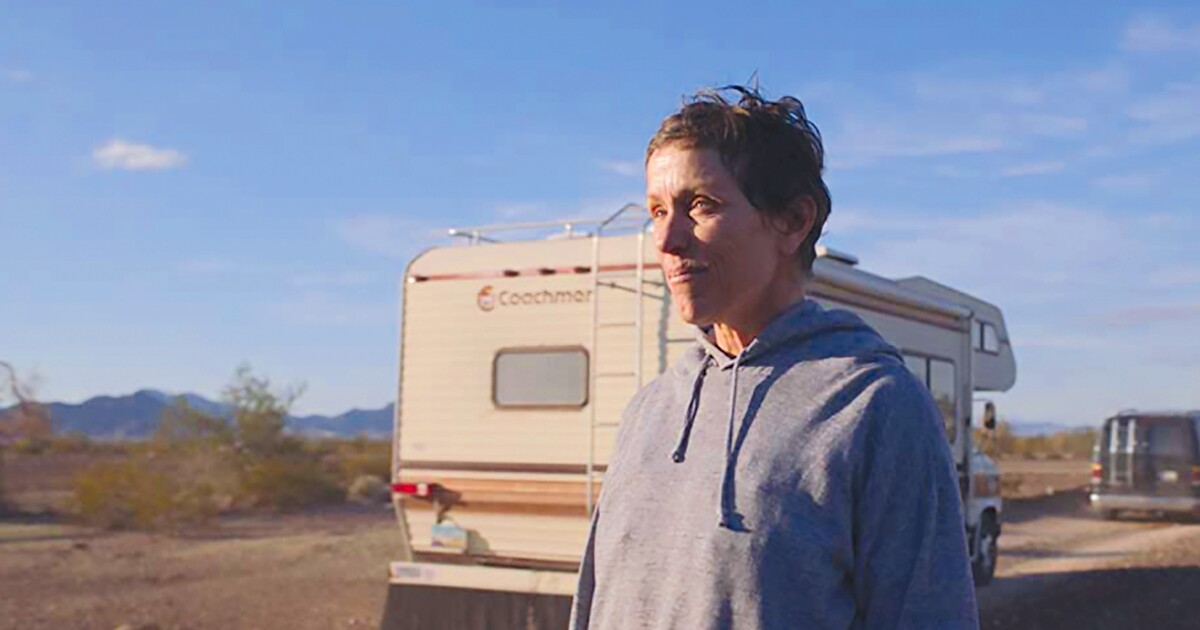 Early in the film Nomadland, the latest from writer-director Chloe Zhao and an Oscar nominee for best picture, protagonist Fern (Frances McDormand) faces a blunt question from a young girl.

“My mom says that you’re homeless. Is that true?” the girl asks.

It would be easy to assume Fern is just trying to avoid being reduced to the fact that she lives in the back of her van. But Fern no longer needs a physical house to have a place that she can call home.

Since the death of her husband and the economic implosion in Empire, Nevada, Fern has taken to a nomadic life, crisscrossing the United States in search of whatever work she can find to stay afloat. The movie follows her across the country as she befriends other van-dwelling, RV-driving nomads. Zhao, who won the best picture and best director Golden Globes for the film, uses Fern’s fictional story to examine the lives of the thousands who call their vehicles their homes.

It may seem too on the nose that a parable about the country’s industrial decline begins with a place named Empire, but it’s a real company town that became a ghost town following the closure of the gypsum plant in 2011.

Nomadland is a blend of reality and fiction. Zhao based the film off a 2017 nonfiction book of the same name, which told the stories of older people who responded to the Great Recession by packing up and hitting the road in search of seasonal employment.

While the book featured nomads in every corner of America, Zhao and cinematographer Joshua James Richards focus on the Great Plains and Southwest, remote regions that we rarely see on our nightly newscasts.

To add to the film’s authenticity, Zhao supplemented veteran actors with actual nomads who play fictionalized versions of themselves.

The most prominent of these roles is portrayed by Bob Wells, a real-life vlogger who chronicles his life as a nomad and offers advice to others who choose the same path. To give you a sense of how much demand there is for this type of lifestyle, Wells’s YouTube channel has over 480,000 subscribers. But it is unlikely that every subscriber is turning to him by choice.

During a gathering of other van-dwellers depicted in the film, Wells explains why so many nomads have chosen to come together in communities where they tend to each other’s needs.

“I think of an analogy as a workhorse,” he says, “the workhorse that is willing to work itself to death and then be put out to pasture. And that’s what happens to so many of us. If society was throwing us away and sending us, the workhorse, out to the pasture, we workhorses have to gather together and take care of each other, and that’s what this is all about. The way I see it is that the Titanic is sinking, and economic times are changing.”

Indeed, every time the film introduces us to a nomad, a tale of economic desperation or personal tragedy related to old age or illness doesn’t seem far behind. As someone who once spent the greater part of a year volunteering at a local homeless shelter and nonprofit organization that served the indigent, I can tell you that the stories depicted here reflect reality.

Most of America’s homeless population consists of people who’ve fallen on hard times; while we often think about the chronically homeless who suffer from mental illness or substance abuse, the reality is that we are all closer to the edge than we may believe. Many of us are one layoff, unexpected illness, or death in the family away from having to pack up our belongings and frantically search for a roof over our heads.

But Fern’s story is not just about struggling to survive in between seasonal jobs at Amazon fulfillment centers and restaurants. Without giving anything away about the plot, it should be said that Nomadland wants us to know that nomads aren’t just economic refugees. While many would gladly take a real roof, many others don’t want one.

At one point, a character who isn’t among the film’s nomads compares them to the pioneers of old. “I think Fern’s part of an American tradition,” she says.

Not every nomad sees themselves as a temporarily embarrassed homeowner — some don’t find their situation to be embarrassing at all. The United States is, as we are frequently reminded these days, a nation that was settled. Those settlers, though they brought with them misfortune and injustice for the indigenous inhabitants, were motivated by a desire to be free of the confines of the Old World.

That world, in Fern’s case, delivered dizzying amounts of disruption and dislocation, and you can hardly blame her for seeing the promise of a stable job in a single place as somewhere between unrealistic and undesirable.

To return to the exchange that opened this review, perhaps it is true that Fern once saw “home” as settling down in a small house with her husband in Empire. But the home she desires now is the open road. Unlike a gypsum company, the road doesn’t pretend it will be there forever, providing you with a job and health insurance that will be there as long as you need them. It is honest about its turbulence and unpredictability.

It’s hardly a surprise that America’s nomads prefer that honesty to the promise of a middle-class life that was revealed to many of them to be a lie.

Zaid Jilani is a freelance journalist.