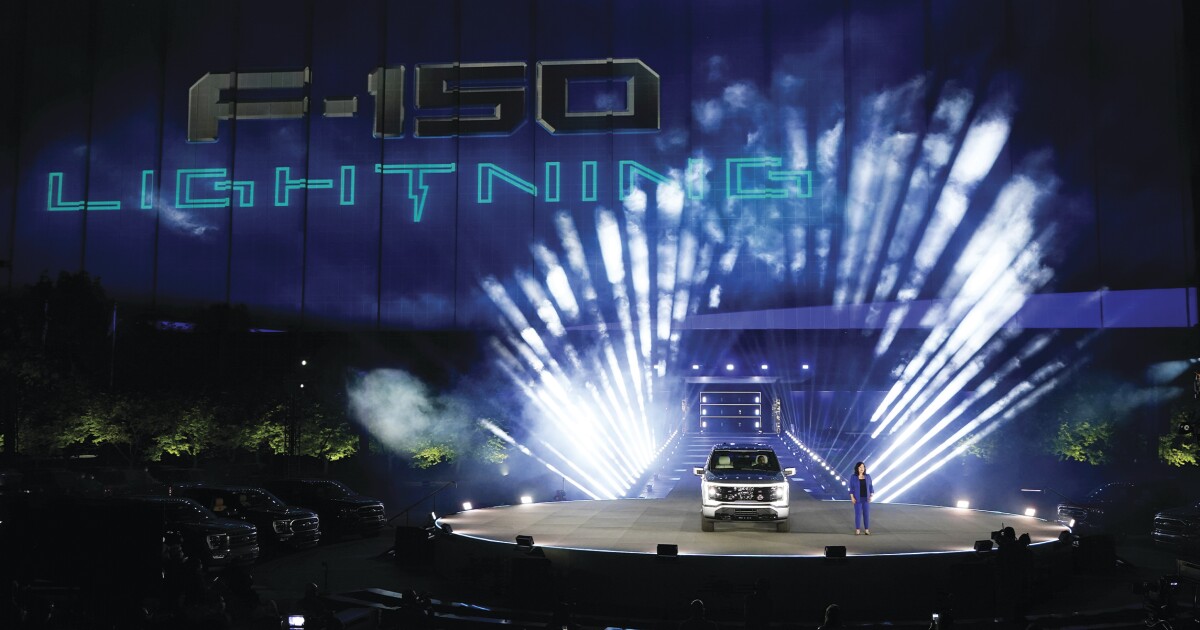 Major automakers see vehicles with electric powertrains as a new moneymaker in the United States, market analysts say. It's a strategic shift driven less by climate change and more by a desire to compete economically.

The newfound electric enthusiasm from automakers could help President Joe Biden curb emissions from transportation, the highest-emitting sector in the U.S.

Biden wants to put many more electric cars on the roads, pledging to provide point-of-sale rebates for consumers, investing heavily in building out charging infrastructure, and encouraging domestic manufacturing of the cars and their batteries. His infrastructure proposal would spend at least $174 billion on vehicle electrification.

“The future of the auto industry is electric. There’s no turning back,” Biden said on May 18, speaking at Ford’s electric vehicle center in Dearborn, Michigan. “The real question is whether we’ll lead or we’ll fall behind in the race to the future.”

One day later, Ford unveiled a fully electric F-150 pickup truck, putting an electric powertrain in the bestselling vehicle in the U.S. for 39 years straight. Biden test-drove the truck during his trip, boasting of its speed.

Biden’s strong support for electric cars and his aggressive climate change agenda have certainly played a role in automakers’ changing plans. General Motors, for example, announced in January that it would seek to eliminate tailpipe emissions from its vehicles by 2035. Volvo has said in March it will only sell electric cars after 2030.

But the main reason car companies are switching gears is because they see a business case emerging for mass-market electric cars.

“The biggest change was Tesla releasing the Model 3 and showing automakers that if you build a compelling and cool electric car at a price people can afford that people will buy it,” said Chris Harto, a senior transportation and energy policy analyst for Consumer Reports.

Before Tesla’s success, “I would argue that most automakers weren’t trying very hard to sell a mass-market electric vehicle,” Harto said. “They were selling a car targeted at a small niche of people who were going to buy it on its ecofriendly merits.”

Electric vehicles can deliver on performance, but it had previously been too expensive to electrify larger vehicle classes such as pickup trucks and SUVs, the most popular cars in the U.S.

Battery technology improvements and steep cost declines, though, are “changing what is really possible with electric vehicles,” said Amol Phadke, a senior scientist at the University of California, Berkeley.

“Inherently electric vehicles are a better product because they’re three times more efficient, they are quieter, [and] they have better acceleration,” Phadke said. “The main constraint was costly and heavy batteries.”

According to BloombergNEF data, prices for lithium-ion batteries fell 89% between 2010 and 2020, reaching $137 per kilowatt-hour last year. Most experts say electric vehicles could be cost-competitive with gas-powered cars when battery prices reach $100 per kilowatt-hour.

Consumer interest in electric cars is increasing, too. Lea Malloy, head of research and development at Cox Automotive, pointed to recent research from Kelley Blue Book showing nearly 17% of people are considering an electric model for their next vehicle purchase.

The main reasons for increasing interest are “an expanded range of vehicle choices and the fact that for some households (particularly those with two cars), the economics of owning an EV already pencil out very nicely — in some cases, even without a tax credit,” said Ethan Zindler, head of Americas at BloombergNEF.

That is because while the upfront cost of electric cars is still more expensive than their gas-powered counterparts, consumers ultimately save money on fuel and maintenance costs over the life of the vehicle.

Still, the U.S. is starting from a low baseline. Last year, just about 2% of total new car sales were electric.

It is unlikely economic drivers alone will push enough electric vehicle sales over the next couple of decades to meet Biden’s aggressive climate goals, even with most automakers on board. Cox Automotive’s projections, for example, say that 24% of new car sales will be either full battery electric or hybrid by 2030.

That level of sales is far from the 100% zero-emissions sales target states such as California and Massachusetts have set and that Democratic lawmakers have asked Biden to set nationwide.

One of the biggest hurdles keeping people from buying electric is a knowledge barrier, experts say.

“So few Americans have ever driven an EV, ever been a passenger in an EV, or known somebody who owns an EV,” Harto of Consumer Reports said. “Next to your house, your car is the second biggest purchase most people make in their life. People buy what they know. People buy what they have experience with.”

Many consumers are also skeptical of purchasing electric cars “because they’re not confident enough in the health of that battery,” Malloy said. “Also tied up in that is the cost to replace or repair it and how long it’s going to retain its charge.”

In addition, Malloy noted electric vehicles also currently have a lower resale value than gas-powered cars, which will “hold back the sale of new EVs because most consumers want to buy a vehicle that holds its value.”

Ultimately, the task of educating consumers about electric vehicles falls on the Biden administration, automakers, and other auto industry stakeholders, and speeding up sales will require a policy push.

Phadke argued that it shouldn’t just include purchase incentives and charging infrastructure investments and an overall national goal to reach 100% zero-emissions vehicle sales by a certain date. Biden’s team hasn’t been willing to commit to that type of overarching directive thus far.

“Some stuff will happen on its own, but I don’t think that will be fast enough to be internationally competitive and to really take advantage of the falling battery prices,” Phadke said.

“If there is actually a concerted policy support, infrastructure incentives, strong ‘made in America incentives,’ then you will see more and more automakers taking advantage of those but also then deploying their expertise of selling vehicles,” he added.