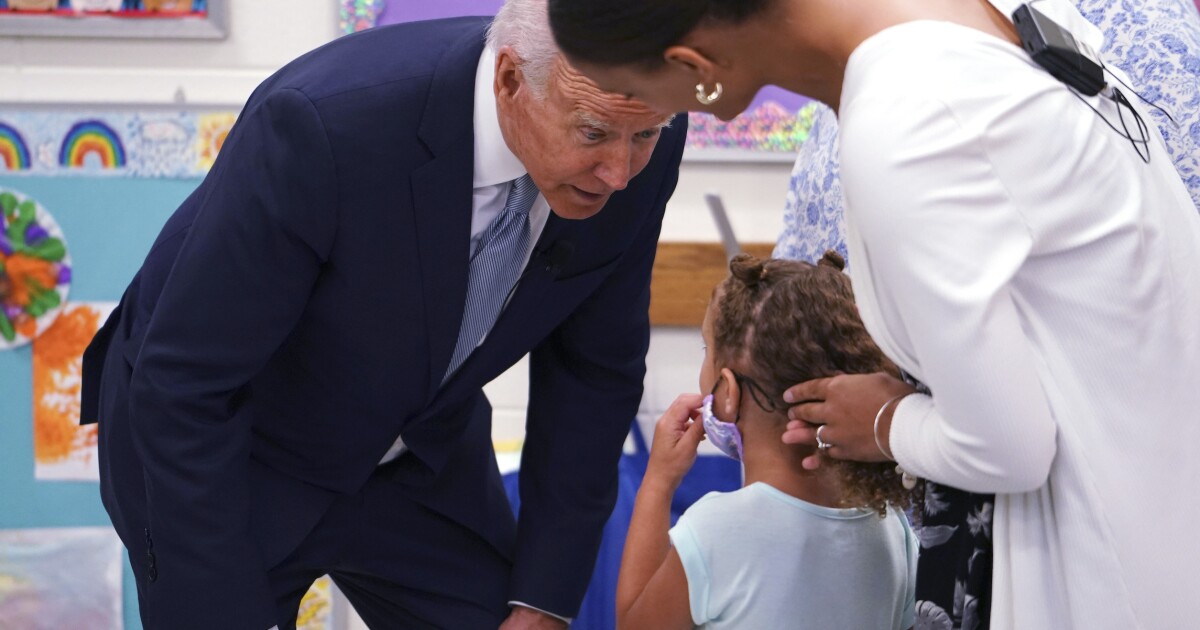 Democrats believe they have found the four magic words to accelerate the enactment of President Joe Biden’s agenda: It’s for the children.

The expansion of the child tax credit that was part of the $1.9 trillion “American Rescue Plan” Biden signed into law in March, his biggest legislative victory so far, is about to take effect. Checks going out to 90% of parents will become a major part of the Democrats’ messaging as Biden moves to promote other child care and social welfare spending proposals.

“You’ll also hear him talk about the fact that, as a former single father, he will stress that his plan is to help boost childcare affordability by building new childcare centers and ensuring that no middle-class family pays more than 7% of their income on high-quality care for children up to age 5,” White House press secretary Jen Psaki told reporters ahead of a Thursday Biden speech on the issue. “He will also note that the Build Back Better plan will invest in the child-caring workforce, provide parents with an up to $8,000 tax credit to cover their childcare expenses, institute 12 weeks of paid family and medical leave, and extend the expanded child tax credit from the Rescue Plan.”

“For the children” is a familiar phrase for Democrats, but the expanded child tax credit is seen as a win for Biden’s party for two reasons. One, it provides tangible benefits to families with children and can be billed as a tax cut instead of a stereotypical liberal tax hike. And two, both cut into the Republicans’ family values and tax-cutting messaging, and married parents frequently vote for the GOP.

Democrats are also describing it as a major anti-poverty initiative, citing estimates from liberal policy organizations that the credit could cut child poverty in half in one year. Biden wants to make the credit permanent and include it in the reconciliation bill that is part of the administration’s two-pronged approach to infrastructure.

This could make the reconciliation bill more popular, Democrats hope. The bipartisan framework contains many of the widely supported traditional physical infrastructure projects, and even some centrists in the Democratic caucus have hinted they will balk at the $6 trillion price tag favored by many liberals.

“The president knows the child tax credit would be a game-changer for millions of families and would welcome bipartisan support for it, but there is not a round of talks happening with Congress about a second bipartisan package,” a White House aide previously told the Washington Examiner.

Tax credits for children were a big component of pro-family tax reform proposals floated by congressional Republicans, including Sens. Mike Lee of Utah and Marco Rubio of Florida. The party also dabbled in paid family leave, with Ivanka Trump leading the public charge during the previous administration.

But conservatives also split over child tax credits. Some argued that they did not improve incentives to work, save, or invest and thereby stimulate economic growth. “Tax credits for kids — what’s not to like?” the Wall Street Journal editorialized in 2017. “The answer is obvious if you step back and consider the purpose of a tax code. The goal should be to raise the money needed to fund the government with the least amount of economic distortion.”

“Some conservatives we respect wonder if such tax relief for families would do enough to promote growth,” Rubio and Lee argued in 2014. “But it bears remembering that the end goal of economic policy isn't simply growth but freedom — clearing the obstacles from each American's unique pursuit of happiness.”

CLICK HERE TO READ MORE IN THE WASHINGTON EXAMINER

Now, Democrats are hoping to take the issue away from Republicans at the same time they prepare to promote more new federal spending in Biden’s “American Families Plan.”

House Democrats have been encouraged to make the tax credit a major selling point when they are back in their districts over the summer. They will be defending a razor-thin majority next year, and the president’s party typically loses seats in the first midterm election. Republicans gained 52 seats in the House under Bill Clinton in 1994 and 63 seats under Barack Obama in 2010.