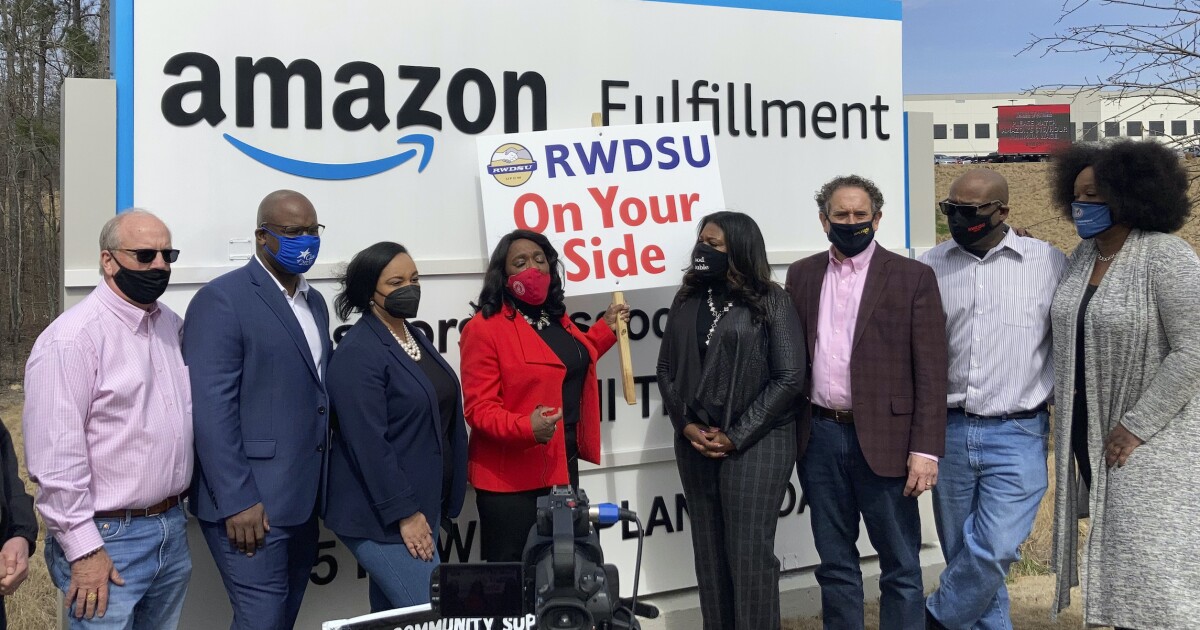 Amazon cruised to victory in an Alabama union election that has implications for organized labor across the country.

It’s been nearly two weeks since voting at a nearly 6,000-employee fulfillment center in Bessemer, Alabama, closed. As of Friday, more than half of the ballots counted expressed opposition to joining the Retail, Wholesale, and Department Store Union, signaling a victory for Amazon.

The National Labor Relations Board was charged with leading the count, which netted a total of 3,215 ballots during the seven-week polling period. The NLRB spent days going through the ballots to ensure that they were valid and allowed both Amazon and the union to challenge the ballots on the basis of whether they were legitimate or properly signed.

After Amazon's victory became apparent, the union announced that it is lodging objections and unfair labor practice charges with the NLRB against the retail giant. The RWDSU said it will present evidence to the regional director of the NLRB so it can be determined if Amazon “created an atmosphere of confusion, coercion and/or fear of reprisals and thus interfered with the employees' freedom of choice.” It also called upon the labor board to set a hearing to determine if the results should be tossed.

“Amazon has left no stone unturned in its efforts to gaslight its own employees. We won’t let Amazon’s lies, deception, and illegal activities go unchallenged, which is why we are formally filing charges against all of the egregious and blatantly illegal actions taken by Amazon during the union vote,” said RWDSU President Stuart Appelbaum.

The union accused Amazon of forcing workers to attend lectures in which it claims the company lied and misrepresented facts about joining the RWDSU. The union also alleged that Amazon brought in outsiders and “union-busters to walk the floor of the warehouse” and “bombarded” employees at the facility with anti-union messaging, including fliers, phone messages, and calls while they were at home.

“Worst yet, even though the NLRB definitively denied Amazon's request for a drop box on the warehouse property, Amazon felt it was above the law and worked with the postal service anyway to install one. They did this because it provided a clear ability to intimidate workers,” Appelbaum said.

Amazon responded to its victory by thanking its employees and pushing back on the accusations that it unduly influenced the vote, saying that the employees were being pushed harder by the union. It also encouraged people to sign up for tours of its warehouses using a website.

“There’s been a lot of noise over the past few months, and we’re glad that your collective voices were finally heard. In the end, less than 16% of the employees at BHM1 voted to join the RWDSU union,” the company said in a statement.

“It’s easy to predict the union will say that Amazon won this election because we intimidated employees, but that’s not true,” Amazon continued. “Our employees heard far more anti-Amazon messages from the union, policymakers, and media outlets than they heard from us. And Amazon didn’t win — our employees made the choice to vote against joining a union.”

Employees at the Bessemer facility, and in other Amazon-run warehouses across the country, have complained of poor working conditions and company surveillance.

One employee at the Bessemer facility testified before the Senate Budget Committee about the union push. She had been invited by socialist Sen. Bernie Sanders of Vermont to address the lawmakers and told them that Amazon has actively discouraged unionization by sending messages to workers’ phones and by posting anti-union fliers around warehouse facilities, including inside the restrooms at the warehouse.

“Amazon brags it pays workers above the minimum wage. What they don’t tell you is what those jobs are really like,” Amazon employee Jennifer Bates told lawmakers last month. “And they certainly don’t tell you that they can afford to do much better for the workers.

“Working at Amazon [warehouses] is no easy thing. The shifts are long. The pace is super-fast. You’re constantly being watched and monitored. They seem to think you are another machine,” she added.

Bates also testified that during the voting period, Amazon actively encouraged workers to vote against joining the union by sending them messages and posting fliers around the building.

Despite the defeat, the unionization effort has raised the RWDSU’s profile and that of unions in general. The RWDSU said that it saw a massive spike in interest from workers across the country amid the drawn-out Bessemer vote.

In a statement provided to the Washington Examiner as voting closed, Appelbaum said that the unionization campaign in Alabama “has already been a victory in many ways” and that the RWDSU believes the attention has “opened the door to more organizing” across the United States.

The crux of the unionization drive was not necessarily wages (Amazon already provides a companywide minimum wage of $15, which is more than twice that of the federal minimum) but rather about working conditions. Some Amazon employees said they are overworked and treated like machinery.

Amazon's labor practices came under further scrutiny amid reports that Amazon delivery drivers are so overworked that some have had to urinate into water bottles to save time while on the job. An internal company email obtained by the Intercept appears to show an Amazon logistics area manager pleading with employees not to defecate into bags.

“This evening, an associate discovered human feces in an Amazon bag that was returned to station by a driver,” the email read. “This is the 3rd occasion in the last 2 months when bags have been returned to station with poop inside. We understand that DA’s [driver associates] may have emergencies while on-road, and especially during Covid, DAs have struggled to find bathrooms while delivering.”

Amazon has pushed back forcefully on the claims that it treats workers poorly. It has claimed that the union is misrepresenting the facts about conditions at the Bessemer facility and has hinted that the reason why is because of declining RWDSU membership.

“Our employees know the truth — starting wages of $15 or more, healthcare from day one, and a safe and inclusive workplace,” an Amazon spokesman told the Washington Examiner last week.

Jay Carney, President Barack Obama’s former White House press secretary, also jumped in on the action. Carney, who now works as the senior vice president of global corporate affairs at Amazon, hit back at Sanders, who has been championing the cause of the workers who are trying to unionize at the Bessemer facility.

“With all due respect, Senator you’re wrong on this. We treat our employees with dignity and respect. We offer a $15 min wage, health care from day one, and a safe, inclusive workplace,” Carney said on Twitter.

Amazon has also faced heat from the NLRB this week after it found that Amazon illegally fired two of its employees. The labor board concluded that two Amazon designers were fired because they spoke out against the company’s policies on climate change and its labor practices at warehouses at the outset of the COVID-19 pandemic. Amazon disputed the finding and said that the employees were terminated for violating internal policies.

The Washington Examiner contacted both Amazon and the RWDSU for comment Friday but did not immediately receive responses.